Amit Masurkar: King of the Jungle

With his new movie, director Amit Masurkar returns to the forest with a quiet, contemplative film about who really is the beast amongst us 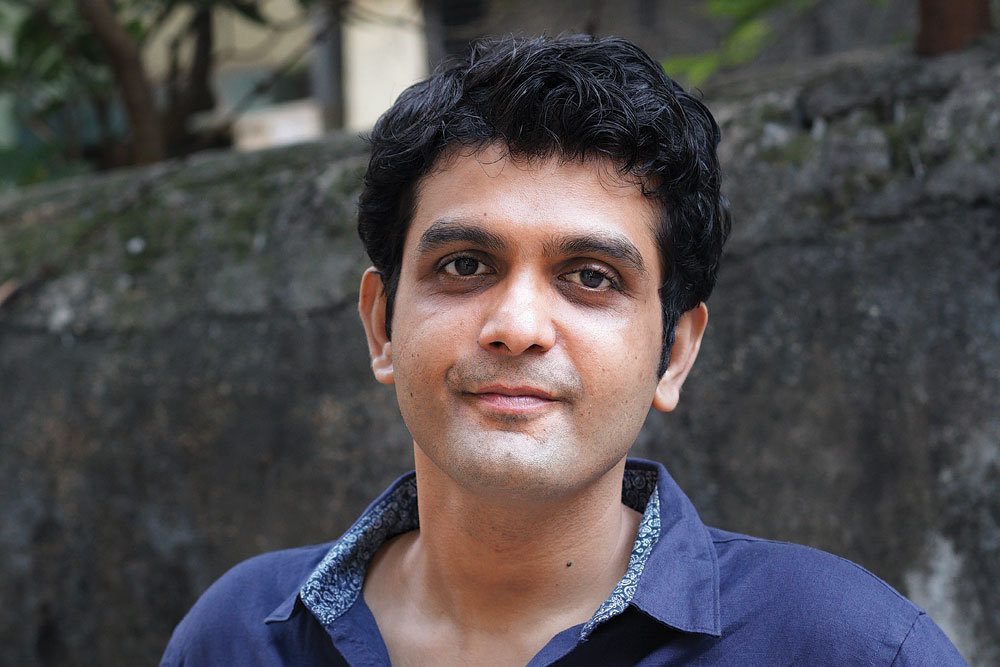 
SHORTLY AFTER WORKING on Sulemani Keeda (2014), a film festival darling about the life of two struggling writers in Bollywood, its lead actor Naveen Kasturia found a poster with his photo in the neighbourhood of Amboli in Mumbai. All it said was in case of sexual problems people could contact him, NK Ranjan, for help. Soon Kasturia discovered it was the handiwork of his director Amit V Masurkar.  That was the time Masurkar, now 40, was working on Election, a film that went on to be called Newton, and which won even more exceptional reviews for the young writer-director in 2017.

The two, who first met on the shoot of Dibakar Banerjee’s 2010 Love Sex Aur Dhokha (Kasturia was an assistant director and Masurkar had shot the ‘making of’ the film), were briefly roommates as well. Kasturia, who was persuaded to become an actor by Masurkar, has since gone on to have a successful career playing nerdy, geeky characters. Masurkar, who spent two years as a gag writer on The Great Indian Comedy Show (2004-2006), is now on his third film, Sherni, another critical success that has won plaudits for its theme as well as the work of its star, Vidya Balan. Aired on Amazon Prime, the film explores the man-animal conflict through the story of a tigress who turns a maneater and is being shepherded to a nearby national park by Balan, who plays a forest officer.

Written by Aastha Tiku, who has a post-graduation degree in philosophy from King’s College, London, the film explores many themes—patriarchy, bureaucratic sloth, the colonial legacy of foresters, and political interference. All these are distilled in the movie with Balan playing an attentive observer, considerate collaborator and problem solver. She is a solitary figure who doesn’t set much store at being liked. It’s a different kind of feminine energy that is not a cliché. There is no grand happily-ever-after, no great melodrama, and certainly no hysterics. Balan, playing Vidya Vincent, is just a woman who likes her own company, revels in her work, and tries to work in a team.


I liked the fact that Vidya Balan was very sincere about her work despite being a big Bollywood star. Vidya loved the idea when we shared it with her, says Amit Masurkar

For Tiku, this was a way of acknowledging India’s very own feminism, which is not divided into waves as it is in the West. “Our feminism is intersectional,” she says, pointing to the role of women in the Chipko movement and Vandana Shiva’s eco-feminism. Through Balan’s character, and that of other female forest officers, many playing themselves, she wanted to explore the reality of women as safekeepers of conservation. It is embodied in the character of Jyoti, a village woman in the movie, played by National School of Drama graduate Sampa Mandal, who points out the simple reality that the forest officers have planted trees where their cattle would graze. Jyoti’s character carries in her persona the intergenerational wisdom of the village, their understanding of nature and their relationship with their animals.

Masurkar is an engineering dropout who went on to study history at Mumbai University. He says he can count the number of films he had watched in the theatre till he was in school as film-watching was not something his parents encouraged when his younger brother and he were growing up. “I did watch a lot of films in college—so my introduction to cinema began with American films that were shown in video parlours in Manipal where I was studying engineering in 1999-2001. The internet was new and I had discovered websites that catalogued screenplays of films. So, I would watch films, then spend time in cyber cafes reading those scripts and figuring out how the written word got translated onto the screen,” he says.

While he was studying history, he started working simultaneously, on the fringes of the film industry—writing for The Great Indian Comedy Show, making short films for NGOs, writing screenplays that never got made into films. He then decided to make a film himself, outside of the system. He made a list of resources that were available to him at that time—friends who would/could act, locations he could get for free and props he had access to. With that he wrote the screenplay of Sulemani Keeda, keeping in mind that he had only 30 scenes to tell a story. He was inspired by the mumblecore genre of the 2000s—independent films characterised by naturalistic acting and dialogue, low budgets, an emphasis on dialogue over plot, and a focus on the personal relationships of young people, whose proponents were directors such as Greta Gerwig and the Duplass brothers. That set him free.

He had written the first draft of Newton when he was editing Sulemani Keeda. “The film had created a small buzz within the industry and Shiladitya Bora who had distributed the film at PVR had joined Drishyam Films recently. He loved the idea and introduced me to Manish Mundra. Within a week, Rajkummar Rao was on board,” he recalls.

Newton won him many fans but he took his time over the next film. Tiku was working on Sherni. He was writing another screenplay at the same time. He happened to do some TV commercials with Vidya Balan and they often spoke about working together. “I liked the fact that she was very sincere about her work despite being a big Bollywood star. That’s when Aastha and I decided to share the story with her. Vidya loved the idea and we then took the project to [producer] Vikram Malhotra,” says Masurkar. The result, a film that was completed in a year despite being interrupted by a seven-month lockdown induced by the pandemic.

SHERNI’S TRIUMPH IS in the detailing by each department. The costume designers worked on the look of each character based on actual forest officers. The props were fabricated especially, such as the tranquiliser gun used for the scenes with the tigress. The sound designer kept track of how the jungle sounds at different times and in different seasons. A scientific consultant looked at minutiae such as the shape and size of the pug marks and their distance from each other.

The forest, normally the site of exoticism such as in Satyajit Ray’s classic Aranyer Din Ratri (1970) or of mystery in horror films, is presented here as a friend, not as the other that has to be dominated. “We wanted to create a feeling of warmth and ease about the forest, the familiarity of entering somebody’s home,” says Tiku, an Army child who spent much of her childhood at one with nature in Assam and Meghalaya. Newton was based in the forest as well, which is interesting given Masurkar’s urban background—perhaps for him it is the nostalgia of spending his summers with his grandparents in the interiors of Karnataka.

There is a stark scene in the movie where the men, all officers, are sitting around a campfire, making animal sounds, which grow increasingly more bizarre as they get ever more drunk. Masurkar is quite clear about who the beasts in the story are. Not the animals but the men who use them for sport. It’s emphasised when Brijendra Kala, who plays Balan’s cowardly boss, is framed in a scene with antlers over his head. “It’s a subtle way of settling the matter of whether his character is evil or not. It is clear he is, because he is interested only in the power his position affords, not its problems,” says Kala, adding, “He doesn’t want to take any responsibility.”

This sentiment is echoed in the last scene. “We wanted it to be a wake-up call,” says Masurkar, of the scene where Balan surveys the stuffed animals in glass cases at the Chhatrapati Shivaji Maharaj Vastu Sangrahalaya in Mumbai. That’s where wildlife will soon be seen, says the film, although that’s where we belong. Talking of belonging, Masurkar faces no dilemma about his position in the film industry: “I am friends with everyone—insiders and outsiders. There’s room for everyone and all kinds of films.”

He is now developing a six-part series with Tiku. Filmmaking is an instinctive form of storytelling, he says, so it’s important to balance the big picture with the minute details. By all indications, he seems to have succeeded so far.