Adoor and the Art of Cinema

The doyen of the new wave has come out with his first film in eight years and the twelfth in a career spanning five decades, and at 75, stories still wait for him 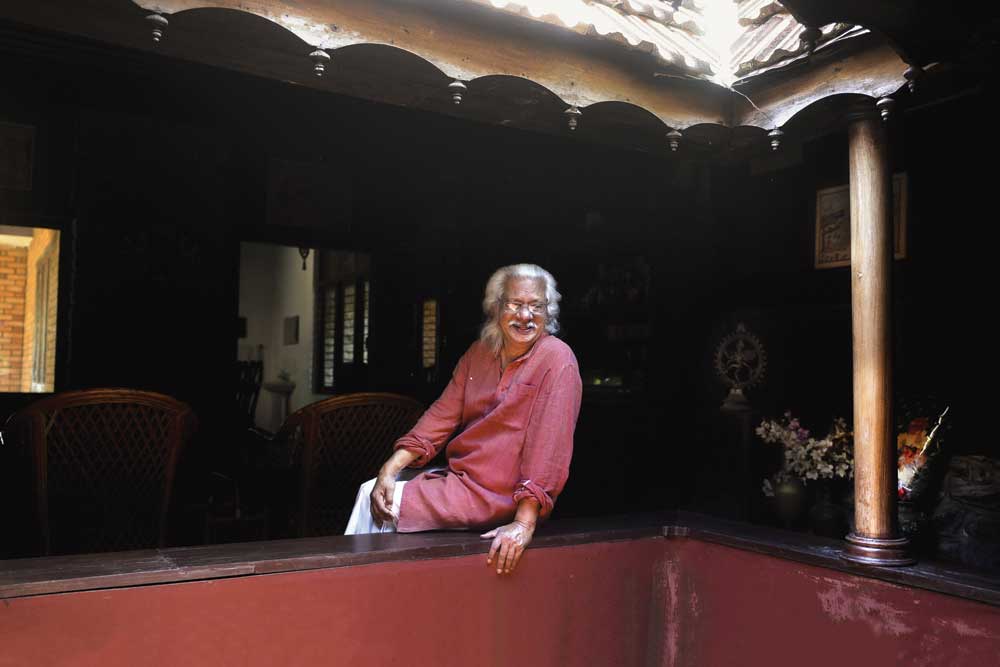 It is about 10 am on the day after Adoor Gopalakrishnan’s latest film Pinneyum (‘Once Again’) hit the screens. I reach Darshanam, the filmmaker’s house on the outskirts of Thiruvananthapuram. It is an exquisite piece of traditional Kerala architecture, every inch designed and built by him. Even as I push open the huge wooden gate, I see Adoor rush out of the front door. Clad in his trademark dhoti-kurta and carrying two small plastic bags, he tells me apologetically; “My maid has not come today. I have to organise my breakfast myself.”

I follow him to the tiny paan shop next door. “Please give some bread,” calls out Adoor to the elderly shopkeeper, who does not look surprised to see his celebrity neighbour. Clearly, it is routine. The shopkeeper is as minimalist as the director: “No bread.” Adoor has to settle for eggs and we walk back home. He moves straight into the kitchen to make his favourite omelette. “All I know is to make this.” For lunch, he drives his decade-old Honda City to a city restaurant which provides “inexpensive and good fish curry and rice”.

This is Adoor today. Living all alone in his large house after his beloved wife Sunanda passed away last November. Their only daughter Aswathi and her husband are IPS officers posted in Mumbai. Today, at 75, as he moves through the dark interiors of his empty wood and granite house, Adoor resembles some of his unforgettable characters caught up in social or personal binds. Yet, with an undaunted spirit, the maestro continues to be fiercely self-reliant.

Not many filmmakers in his league would have spent the morning after the release of their latest film like this. Even as he is back in the kitchen, telephone calls pour in from across the country and abroad. Callers include friends, fans, critics, media persons, distributors, exhibitors and strangers. He runs between his office and kitchen to attend to numerous telephones incessantly ringing together. Patient with most callers, Adoor loses his cool with some. “Please see my film first and then call me,” he says. He then gets the tea ready and says, “How is this for multi-tasking?” He looks relieved when someone calls to say that the second show was house full. “Ordinary people enjoy the movie. But the so called intellectuals with prejudiced minds pour vitriol on social media in the name of reviews.”

Pinneyum, his twelfth film, coincides with Adoor’s many personal and professional landmarks. He has turned 75 and is completing 50 years in filmmaking. Though hardly prolific, with only 12 films in 50 years, Pinneyum follows the longest hiatus—eight years. This is his first film made in digital format, completed in a record 23 days and also released nationally in more than 100 theatres. This is also the first film he has made after his wife’s death. “When it took me longer to start new projects, Sunanda used to ask me if I had stopped making movies. She knew I could not be persuaded to make films, but she badly wanted me to make a new film. In fact I was lucky to have read out to her the draft before she left me. I miss her every minute,” he says.

Though all of Adoor’s films have been grounded firmly in the social, personal and political realities of his milieu, Pinneyum is the first one based on a real life incident: one of Kerala’s most sensational criminal cases. In 1984, a young man’s charred body was found inside a burnt car. Police investigation led to a Gulf- based NRI, Sukumara Kurup, with no criminal antecedents. He had reportedly picked the youngster from the street, offered him a lift and then strangled him with the help of his driver and brother- in-law. Kurup’s intention was to fake his own death in order to claim an insurance amount of Rs 8 lakh from his company in Dubai. Even after 32 years, Kurup remains untraceable.

I try to rediscover myself with every movie. I make a film only when I feel absolutely compelled

Purushothaman Nair, the protagonist in Pinneyum, played by Malayalee star Dileep, is modelled on Kurup. Nair, a simple villager who remains jobless even after he marries his fiancée (Kavya Madhavan) and becomes a father, faces humiliation in and outside the family. Finally he gets a decent job in the Gulf and gains respect. But by the time he comes home on leave, he is overwhelmed by the obsession to make more money to give his family a good life. This prompts him to fake his death so that his family can claim the insurance payout. He reveals the plan to his wife, who tries to dissuade him in vain. His elderly father- in-law and an uncle—both pious and gentle—become co-conspirators and help him pick a stranger, kill him and burn the body inside a car. But a few goof- ups result in disastrous consequences for Nair and his family.

“I have used Kurup’s incident to expose the criminal desires residing in the dark interiors of even a good person. A criminal lives inside all of us. Avarice for money or sex can bring the criminal out. There is no logic or reason behind this transformation,” Adoor explains. “When a criminal’s plans unexpectedly fail, disaster strikes, like what happened with Nair.”

Through the gripping narrative, the film pans some of the most important and interrelated facets of contemporary Kerala—high levels of education and youth unemployment; the physical and mental travails of the Malayalee diaspora forced to leave their families and go work in distant lands; the huge consumerist wave triggered by Gulf money; the obsession of the middle-class with making a fast buck.

So, is Pinneyum Adoor’s answer to his critics that he abhors contemporary mores and remains comfortable in the past? “My films have always been socially and politically concerned. Most of my films were stories of the times they were made in,” he says. “However, I don’t think an artist should always deal with contemporary issues in order to dwell upon profound socio-political issues which have universal and timeless dimensions.”

Is Adoor political? “Yes. But I am basically a humanist and nothing more. Perhaps a Gandhian humanist. Politics informs each and every act we perform. Even the position I decide for my camera talks about power equations.” Long-time friend and Malayalam writer Sethu agrees: “It is superfluous to say ‘Adoor is apolitical.’ He may not have party politics, but all his films are stories of human predicament and are intensely political.”

I am basically a humanist and nothing more. Perhaps a Gandhian humanist

After completing half-a-century in filmmaking, has Adoor changed in any way? “I prefer not to look back. But certainly I have changed in many ways, just like everything else around us. I am also particular never to do what others have already done. I am even more particular that I should never repeat myself. Each of my films should tell a different story and in a different way. I try to rediscover myself with every movie. That is why I take long intervals between films. I make a film only when I feel absolutely compelled.”

He asks himself a thousand times whether he should do a particular film, which is why he rejected many offers from big banners in the past eight years. “But I have been fortunate to get producers whenever I am ready. After the completion of each film, I take a long time to come out of it. Then I go completely blank and have no answer when people ask me about my next project. However, my views about cinema or art or my values in life have remained almost unchanged.”

What was the most exciting part about making Pinneyeum? “It was my first experience in digital format. I was hesitant at first. But the way it has made shooting easier and perfected the technical results related to the images or sound is amazing,” says the director who is known as a ‘dictator’ who doesn’t tell his own crew the story or allow even his star actors to read the script. He writes his script in meticulous detail with shot divisions, camera positions, movements, the lenses to be used on each shot, etcetera. Even the master technicians he employs have to mostly only follow his instructions.

“I have been a part of his films from his first. But he has never told me about my character or the story. All I do is what he asks me to,” says actress KPAC Lalitha. Adds Dileep, “I was ready to sacrifice anything to work in Adoor’s movie and offered myself as an empty page. But I was surprised when he gave me the script to read, though he warned me not to read more than what I had to deliver. Adoor does this because those who read the script would involuntarily be forced to interpret the role in their own way, and “I want my characters to never move away from the way I interpret them.”

It is almost noon when we are through. Suddenly Adoor remembers that he has not had breakfast. This happens, he says, most often when he is engrossed in work. It is now time for lunch and he decides to forget breakfast.