Adil Hussain connects with strangers by cooking them his favourite dishes 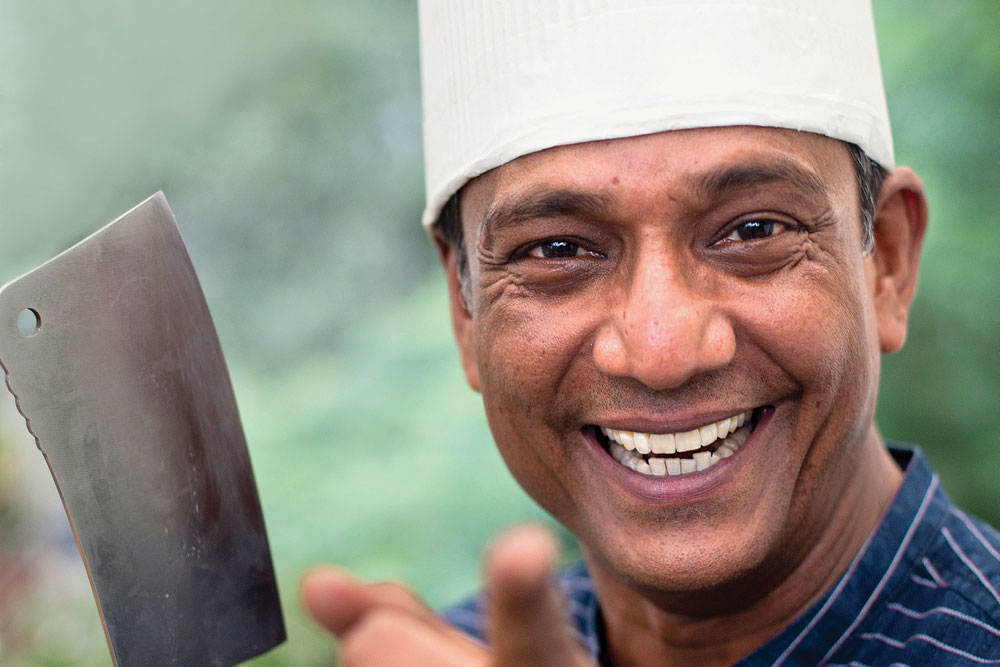 ADIL HUSSAIN IS A happily married man. The inter-religious couple have a son, Kabir, named after the 15th-century poet saint claimed to be their own by both Hindus and Muslims. Before Hussain got hooked, he had a string of affairs and his friends attribute his “success with girlfriends” to his culinary skills. Hussain, the actor who has performed notable roles in films such as Mukti Bhawan (2016) (now available on Netflix as Hotel Salvation), English Vinglish (2012), Life of Pi (2012) and others, doesn’t contest these claims. He simply guffaws.

Hussain knows he is a great cook, especially of the type of food that his mother used to prepare back in his hometown Goalpara which he left at the age of 20 in 1983 to pursue studies in Guwahati, the capital of his home state Assam. It was then he realised homesickness first begins in the kitchen, a reason why he began to cook. The habit thrived as he moved cities, first to Delhi to study at the National School of Drama in 1990, and then when he began to shoot movies in multiple locations across the world.

While in New York shooting for Sridevi-starrer English Vinglish, in which he was her uppity husband, Hussain used to cook for the entire crew, he says. He confesses that he loves to conjure up dishes at the drop of a hat and never misses an opportunity to make meals for large groups. Obsessed with the pleasure he derives from this inviolable habit, he carries huge quantities of grains, vegetables and other ingredients from Assam to different destinations, to enthrall his friends and film crew with his mastery of Assamese cuisine.

For him, cooking isn’t just about feeding people who in turn express their admiration for his savoury dishes but also an opportunity to bond and exchange thoughts, about any subject, especially life and culture. This is what he expects when he cooks in Delhi at Nimtho, located in Greater Kailash I, which specialises in Sikkimese organic dishes and is run by the gracious Binita Chamling, a Sikkim-born alumnus of Manchester University and a trained biotechnologist.

“You can’t invite everybody home and cook for them. You need spaces like restaurants to do that”

Hussain has a pact of sorts with Chamling that whenever he is in Delhi, he will cook in her eatery and engage with guests at an event titled Adil’s Kitchen, Curries and Conversations. The actor hopes to replicate this exercise in other cities as well. But to start with, it is going to be Delhi and Nimtho.

Interestingly, some of his friends tell me that Hussain is a better cook than an actor. That might be an exaggeration considering his stellar performance in Mukti Bhawan and in the recent Norwegian entry into the Oscars, What Will People Say. Hussain who starred in the Norway-produced movie shot in multiple locations including the Nordic country was surprised at the nomination, a rare honour for someone who isn’t a resident of that nation.

Now, he isn’t going to walk into Nimtho and cook the way Chamling wants him to. On the day he is chef, the cuisine will be mostly Assamese. After all, he is bringing with him ingredients to make his favourite dishes. He will also get Assamese rice. He wants to try dishing up delights such as masor tenga (with Rohu fish) and khar, an alkaline dish probably unique to Assam and often had with rice. Khar, according to cookbooks, is produced from the ashes of burnt banana stems or banana peels of aathiya kol (musa balbisiana, a relatively wild species of banana) and is known for its health benefits.

The peripatetic Hussain is a foodie who is wont to pick up the best of tastes from across the world. He experiments with all kinds of recipes that he can lay his hands on. But whenever he is away from home, he wants to recreate the passion of his mother’s cooking and, interestingly, cook the way mothers cook for family, with endless love and compassion. Interaction with those who savour his food follows. And he sees the practice as an amazing and meditative experience which he wouldn’t trade for any other passion.

Don’t be mistaken, Hussain is a busy man, having signed at least four films, the details of which he keeps close to his chest. One of them is with acclaimed director Goutam Ghose. The actor’s sense of humour is contagious and so is his “deep intensity to serve soul food”, an authentic product of great rigour and hard work. He believes that as in acting, the idea in cooking is also to make things appear effortless notwithstanding the Herculean effort behind the scenes.

A people’s man, his idea, Hussain notes, is to connect well with people from various walks of life. “You can’t invite everybody home and cook. You need spaces (restaurants) like these to do that,” he points out. For him, the Nimtho experience is meant to be a yet another chance to learn things anew through meaningful interactions over food, he says, because, according to him, nothing helps strike a chord with strangers like food does. Hussain should know; after all, he has won many hearts through his mouthwatering preparations.