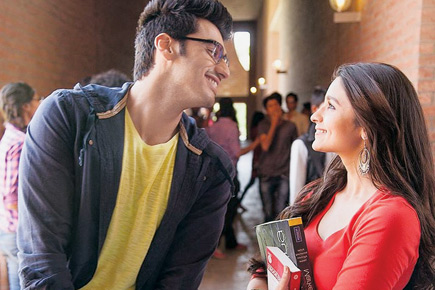 This film has a high emotional quotient, and there are many moments that leave you in tears. It is occasionally maudlin and has cliches about North and South Indians, as also situations that are not entirely believable, but the movie still manages to touch a whole bundle of nerves. This is unsettling— because on one hand you recognise it as the melodrama it is, and on the other, it tears your heart apart.

It is not the love story that’s so moving, though that is well done. The film is about the Indian family, and how difficult it is to hold it together in these testing times. Krish Malhotra (Arjun Kapoor) and Ananya Swaminathan (Alia Bhatt) meet at college and fall in love. She is Tamilian and he is Punjabi, and the cultural divide affects both families negatively. 2 States is about how hard they fight to make adjustments in their lives so their parents accept that the world has changed and caste and community no longer matter.

Krish comes from a difficult home with unhappily married parents. Ananya’s parents are in a more stable marriage, but her father (Shiv Kumar Subramaniam) is miserable in his job and this affects his sense of well-being. He makes monosyllabic comments and has a general sense of apathy towards the world around him. Krish talks to him and tries to make an emotional connect with this lonely middle-aged man. These scenes are genuinely touching; it is moving to see a young man reach out across a generation with such sensitivity.

We also notice how the temperaments of the young couple are shaped by the level of happiness they see in the lives of their parents. The two start becoming as inflexible as their parents, until, at the last moment, they recognise this trait in themselves and change, gently nudging their parents to change with them.

This movie is operatic.