In the sleeper hit indie film Aamis, members of a club catch and cook their own fresh meat. The director Bhaskar Hazarika tells Palash Krishna Mehrotra how he got the elements of love and horror just right 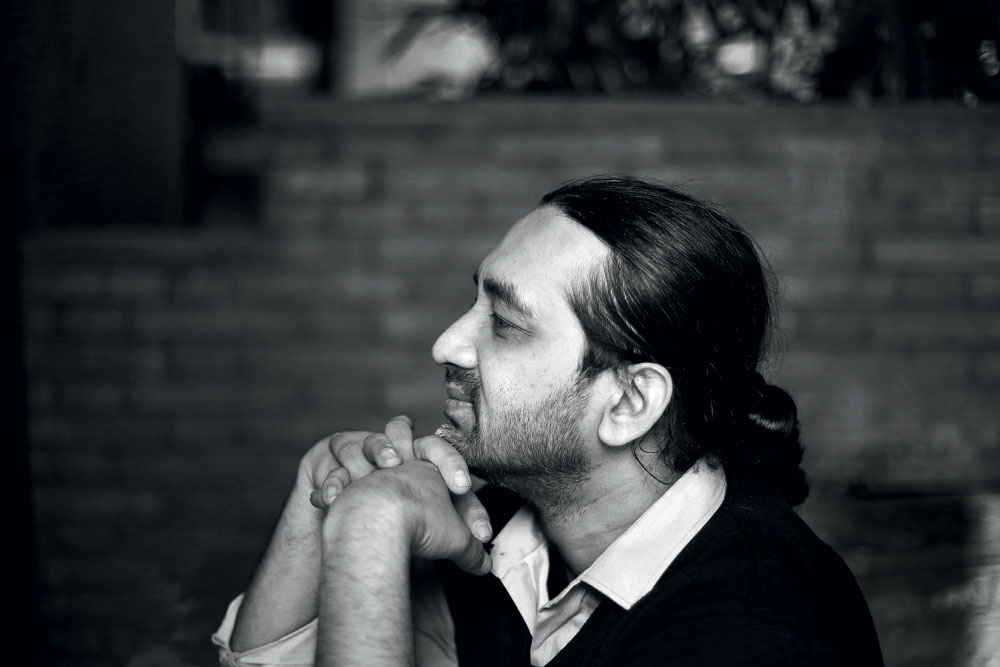 
I AM AT A FARMHOUSE PARTY IN Delhi. It’s winter; a young man whom I’ve just met stands at the barbecue, flipping chunks of meat. He introduces himself as an entrepreneur of craft meats. He explains to me that the processed industrial-scale meat in the market only tastes of antibiotics. He extends his hand and offers me a piece: “Feel the animal, brother, feel the animal.” I bite into succulent flesh; I can hear the chickens clucking.

I was reminded of this while watching the season’s indie sleeper hit: Bhaskar Hazarika’s second feature, the Assamese film Aamis (Ravening). At the heart of Aamis is a club whose members catch and cook their own fresh meat. They eat different kinds of meat. They treat this as a culinary adventure. One of the members of this club, Sumon, a PhD student who is doing his doctorate on the eating habits in the Northeast, happens to meet Nirmali, a doctor married to another doctor. While their meeting takes place outside the club, Sumon introduces Nirmali to the world of exotic meats. One can almost hear him telling her, as they fall in love tiffin-box by tiffin-box, ‘Feel the animal, Baideo, feel the animal.’

There are tropes here that are put through the tumble-dry cycle. The younger man falling for an older woman is one. The bored housewife with repressed desire becomes a bored doctor whose repressed desire is sublimated through a curious blood lust. Nirmali’s best friend is Jumi (Neetali Das), whose footloose sex life is markedly different from the conjugal chasteness of Nirmali’s. Jumi is full of stories about her latest Eddie, who ‘is hard in the right places and soft in the right places’.

This is an unusual platonic romance, where Sumon and Nirmali exchange sweet nothings on the lines of ‘as long as you don’t feed me dungbeetles’. This is also an indie film, not Karan Johar’s Student of the Year, so the hostel details are warmly familiar: Sumon in a shapeless sleeveless pullover, reading Herman Hesse’s Siddhartha; a small dusty football pitch; the tak-tak sound of ricocheting ping-pong balls in an empty hall. When invited to Nirmali’s place for dinner, Sumon pulls out a piece of clothing from his hostel room almirah and immediately brings it to his nose to check if it’s smelly.

This is also very much a Guwahati film. We meet Sumon’s friend, Elias da, a local vet and the owner of a battered maroon Maruti 800, who spends his living days stitching up pets and ‘picking fleas off the dogs of the rich’. The tone is set by the opening scene of Guwahati waking up: a transistor strapped to a cycle rickshaw plays Monor Batori, sung by the Assamese legend Jayanta Hazarika, who died at the age of 34, but whose songs still play on the radio.


I have learnt a lot from J-Horror, in particular the device of creating surreal situations in the everyday and the banal,” says Bhaskar Hazarika, filmmaker

Aamis though is not a film about quiet provincial life. Its grotesque plot unspools through disarmingly gentle dialogue. Sumon tells Nirmali about a rooster with ‘a red regal crown’, that his father presented him with as a boy. It was the first animal he loved but also ate. Why? ‘I was hungry.’ An echoing fading monologue provides the viewer with a list of animals that people eat: deer, elephant, monkey, wild birds, lizards, snakes, snails, dragonflies, earthworm, grasshopper, termites, monitors, moths. What is considered normal in one culture is abnormal in another. We learn about deveining shrimps and the gondhipuk bug, whose juice is supposed to induce a 48-hour trip that sends people crawling into baskets and wells.

But the second, more important tack, is the doomed love affair between the student and the doctor. The latter half of Aaamis is dedicated to exploring the final Rubicon: human flesh. This is where the narrative sheds its stark realism and acquires an edge of horror. Two people in love, constrained by social mores, are left with no option but to consume each other in bite-sized pieces. My flesh is yours and yours mine. The lovers become sacrificial lambs, cutting and cooking themselves, ritualistically offering themselves to the altar of trangressive love.

I KNEW BHASKAR HAZARIKA in college in Delhi, in the mid-1990s. We bonded over Alice in Chains and cheap weed. We lost touch, until he made an Assamese film called Kothanodi (2015), which won the National Award. His second film Aamis has propelled him to the big time, from debuting to rave reviews at Tribeca to getting an ‘Anurag Kashyap presents’ tag for the India release. When I spoke with him over the phone, the first thing I asked was about his decision to make indie films in Assamese. Was it deliberate?

“I did not make a conscious choice to make Assamese cinema. I just had this one script which I had written— Kothanodi—that had to be made in Assamese. Kothanodi is based on a well-known book of folk tales called Grandma’s Tales, which is sort of the Assamese version of Grimm’s Fairy Tales, compiled into a book by Lakshminath Bezbaroa. I’d heard these stories from my mother as a child, like almost every other Assamese kid back then. It’s after experiencing what it’s like doing an independent Assamese film that I decided I should work only in Assamese cinema.”

But what exactly was it about this experience that made him stick to the language and the landscape? “It was a lot of things. Most of all—it felt like home. All my life I had stayed away from Assam. But this had the effect of making me feel rootless and it showed in the stuff I was creatively working on. I sort of had an epiphany of sorts and embraced my identity as an Assamese person during the making of Kothanodi. I finally belonged somewhere and this, I feel, will only make my creative vision stronger. Besides, there was so much to explore in Assam in terms of material.”

It was a significant decision, especially for someone who left Assam at the age of seven and never even got to study the language formally in school. He says, “Most of my reading in Assamese was listening to my parents occasionally reading out stories for me.” One of the magazines that Hazarika regularly browsed through was Bismoi: “It had fascinatingly surreal stories and art…authentic local pulp stuff.” His fascination with horror as a genre began here.

In his twenties, Hazarika ploughed through the writings of Stephen King, Edgar Allan Poe and HP Lovecraft: “In the works of all three, you will find a mood being created more than set pieces to evoke shock and dread.” He watched the films of Japanese directors: Hideo Nakata’s Ringu (1998) left a deep impression, so did the work of Takashi Miike. Gradually, Hazarika was beginning to build a cinematic idiom of his own, where horror is expressed in a rich, realistic vein, in stark contrast to Hollywood horror where the chills come from the special FX monster. “The best thing I learnt from King was to never show the monster behind the door, but to only suggest at its menacing presence. I have also learned a lot from J-Horror, in particular the device of creating surreal situations in the everyday and the banal,” he says.

Aamis draws its strength as much from the writing as it does from marvellous performances from first-time actors Lima Das and Arghadeep Barua. The former is a dentist and reputed Sattriya dancer, while Argha plays in a band. Explains Hazarika: “Aamis was supposed to be mounted in the Romeo-Juliet template—so it was mandatory almost to look for new actors to play the lead. We auditioned 15 actors before we found Argha in a music video. The two had never acted before but were creatively switched on. Both just needed the right motivation to act.”

I ASK HAZARIKA IF he was taken aback by the success of the film about bizarre meats, especially at a time when the trend in America is to go vegan and the Hindu right in India is nudging citizens towards a Brahmanic vegetarianism. “I was aware that the material could potentially be deemed to be explosive. I’d consciously worked on the script to ensure that the trope [meat] did not overpower the story—which for me always was a sad and tragic story of two individuals who had the misfortune of falling for each other. That said, I was totally taken aback when critics claimed that such a film had never been made in India. I wasn’t expecting that reaction at all.” Does he think of his characters as sad and tragic? “Yeah man. Stupid, stupid people.”

There are two central moments in the film: when Nirmali realises that she’s been tasting Sumon’s flesh, she retches but doesn’t throw up. When realisation dawns on Sumon, he throws up straightaway. I asked Hazarika if that was deliberate. “Yes, because for her it was by now no longer about love but about addiction. I justified Sumon’s throwing up by trying to place his reaction akin to men who get intimidated when a woman takes initiative in a relationship.”

The ending of the film can disappoint one with its easy moralism. I wondered if it was so because Hazarika was making films for two audiences: international festivals and domestic audiences. “As a rule I don’t start writing a script till I have sorted out the climax,” he says, scotching my observation. It’s the way he always envisaged it, regardless of where the audience came from.

Before he made Aamis, Hazarika’s first exposure to his art form came many years ago via a Master’s degree in film and drama, for which he travelled to England. For years he wrote for television, living in a cramped flat, sandwiched between mandir and masjid in Versova. “Indie cinema is driven by the need to tell a story rather than the more prosaic reasons of commerce as it happens in big film industries. I’m happy to see it its growth, which is fuelled by lower costs of filmmaking equipment and the rise of digital streaming platforms. I do work on stuff out of Bombay still. You’d have to be foolish not to seek work in the most well-paying film market in India.”