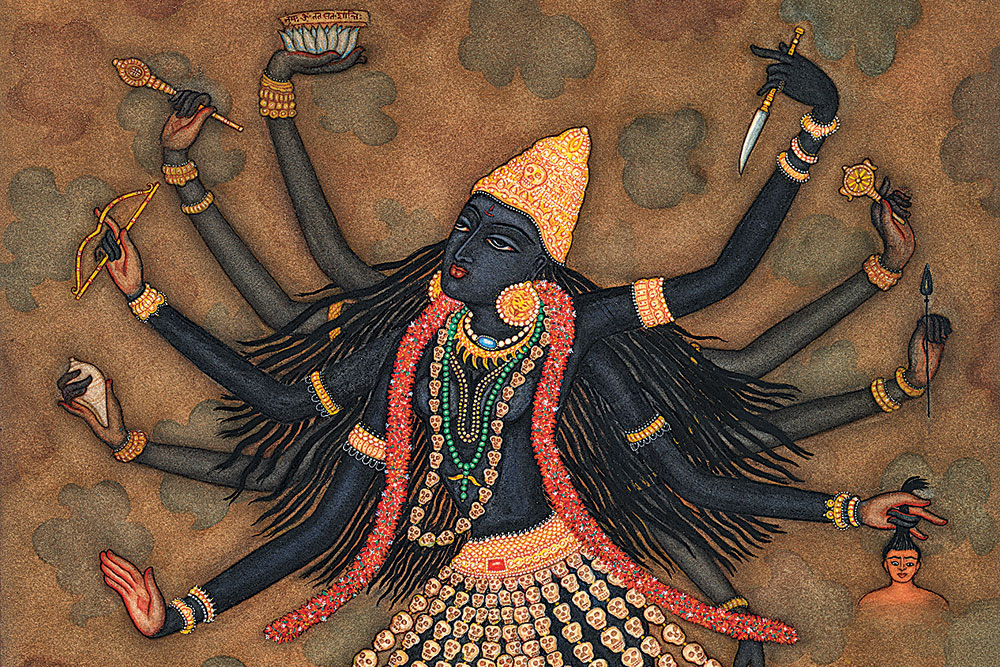 
THE HISTORY OF Indian art in the early decades of the twentieth century seems peculiarly reticent about the role played in it by women artists, though those years of ferment affected the entire art world in the subcontinent. Independence from the British brought in its wake a sense of freedom from stifling colonial traditions of art-making—or, at least, an aspiration to break away from the fetters imposed by the fusty syllabus taught in colleges across India.

Art historian and administrator EB Havell, for instance, who acted as the principal of the Government College of Art in Calcutta between 1896 and 1905, believed in looking back to India’s past to create a distinctly Indian vocabulary in art. However, with the dawn of independence, the idea of what constituted a fitting subject for art altered dramatically. The Progressive Artists’ Group, an all-boys’ club that came into being in Bombay in 1947, began to rebel against the academic niceties of colonial art education by forging a language that was risqué and often abrasive.

The neoclassical elegance of the Bengal School of Art, whose pedagogical and aesthetic standards were set by the likes of Abanindranath Tagore, was suddenly subverted by MF Husain, SH Raza, FN Souza, and VS Gaitonde, among others. These wild young men began to paint images that were strikingly erotic, even outrageous in their sexual openness and depiction of the body. Influenced by the trends unleashed by European high modernism, particularly by Pablo Picasso and other cubists, Indian artists, for the first time, dared disturb the universe of figurative realism. They decided to break out of the mould that had been hitherto set by classical notions of beauty and propriety as embodied, for example, in the murals on the Ajanta and Ellora caves.

Among the women, it was Amrita Sher-Gil (1913-41) who became a trailblazer, in spite of her tragically brief life. In her portraits, especially of women, Sher-Gil captured a dark interiority and a melancholic truth that seemed elusive, even unyielding at times. In contrast to the smouldering charge of Sher-Gil’s paintings and her intransigent genius, some of her younger contemporaries like YG Srimati (1926-2007) remained faithful to an idiom which, even at the beginning of her career, seemed to have already become deeply unfashionable, if not commercially obsolete. If artists like Sher-Gil boldly defied norms by looking west for inspiration, Srimati remained affixed to her eastern roots—absorbed in the profusion of mythologies, histories, and folk tales from the subcontinent—with as much steadfastness and courage of conviction.

Born in Mysore, Srimati spent her formative years in Madras, where she came under the influence of MK Gandhi. In 1946, at the height of the freedom struggle, she would sing devotional songs at Gandhi’s assemblies. Later in life, she moved to New York, where she worked as a performing artist almost till the end of her days. A painter who was an equally gifted vocalist, veena player and dancer, Srimati is nearly forgotten now, though some of her prized musical instruments and paintings remain in the holdings of the Metropolitan Museum of Art in New York. Since her death, there has been a revival of interest in her legacy, leading to public exhibitions in the US as well as scholarly studies, such as the recent book, Art and Independence: Y.G. Srimati and the Indian Style, by John Guy (Mapin; Rs1,750; 144 pages).


Srimati’s painterly output cannot be adequately appreciated without understanding its links with the other arts she was skilled at—classical dance and music. In the 1940s, when she was emerging as a painter, choreographers like Ram Gopal and Uday Shankar were putting India on the global cultural map, taking Europe and the US by storm. Trained by her brother YG Doraisami, Srimati internalised the rhythms of dance and music in her paintings. Her figures, many of whom are drawn from the Ramayana and the Mahabharata, are noted for the precision of their forms, the exactitude with which their gestures are rendered, and the detailing of their facial expressions.

Parashurama with the Battle Axe, painted in 1946, shows the formidable mendicant with his face contorted with rage, roaming around with his vow to wipe out the kshatriyas, the warrior castes, to punish them for neglecting their duties as kings. From Parashurama’s imperious frown to his curling fingers and toes, Srimati pays close attention to the body language of her subject. No less evocative is her depiction of Princess Yashodhara and Rahul, the wife and son respectively of Prince Siddhartha, looking out of their palace to greet the prodigal ruler, as he returns after becoming Gautama Buddha. From the lithe contours of their bodies to the delicate placement of their hands to the hint of a smile playing upon their lips, mother and son seem to have descended from the ancient mural paintings of the Ajanta caves, traversing thousands of years to arrive in the twentieth century.

The appeal of Srimati’s paintings, with their unapologetic focus on decorative beauty, on the lay viewer is not hard to perceive. But to connoisseurs and those in the business of art, her subjects and style of rendition often smacked of old-school orientalism. By the time Srimati began to publicly exhibit her work in the 1940s, modernism in India had already made gallant strides, riding on the polemics expounded by Sher-Gil and the Progressives. Jamini Roy (1887-1972), one of the last greats in the illustrious line from the Bengal School, remained the most remarkable exception among the modernists. With his spindly-eyed characters, drawn from myths and folklore, he crafted an idiom that was at once commercially viable and critically acclaimed.

Srimati’s radicalism was manifested not in following the lead of the modernists, but by rejecting the trappings of avant-garde experimentation

Some of Roy’s contemporaries, such as Abdur Rahman Chughtai (1894-1975) and Ram Gopal Vijayvargiya (1905-2003), were also noted for their adaptation of Mughal miniatures, Pahari styles and Rajasthani paintings into idioms that were suited to the twentieth century. Srimati, in contrast, steered away from the market forces, painting mostly for her own sake. Her abiding interest in spirituality and the scriptures became the fodder for her art, her radicalism was manifested not in following the lead of the modernists, but by rejecting the trappings of avant-garde experimentation.

It is no surprise that Srimati did some of her most memorable work on commission, based on subjects that suited her interests and temperament. In the 1960s, for instance, she worked on a set of 15 paintings for a special edition of the Bhagavad Gita. Even as she stayed faithful to the theme, Srimati took leaps with the execution, drawing on the exuberance of different schools of miniature painting. Although water colour was her chosen medium throughout her life, she managed to tease out remarkable depth and definition from the relatively flat texture of the paint. A classic example of her success in this format is her study of Vishvarupa, which describes the cosmology of Vishnu-Krishna, included in the Bhagavad Gita series. The original painting was so captivating that Indologist and curator Stella Kramrisch, Srimati’s friend, wanted to buy it off her, but the artist refused to part with it.

In the 1980s, Srimati painted some of the luminaries of the Hindu pantheon—Mahakali, the force of destruction, for instance—as well as a series of miniatures as homage to the classical ragas. However, one of her most adventurous portraits, based on the former theme, was Saraswati, the goddess of learning and music, going back to 1947-48. The four-armed deity, in this soft water colour, is pictured against a backdrop of dusky clouds, playing the veena. Her bare breasts are exposed, while her arms are bedecked with jewels. Years before Husain incited the ire of the Hindu nationalists for painting the goddess in the nude, here was an upper-caste Hindu woman making an image as incendiary as his, though following on cues from temple carvings and murals that went back centuries.