Kasturba Panda ki Pantie cracks jokes about a housewife’s longing for liberation. While the humour may be crass, her desire is not 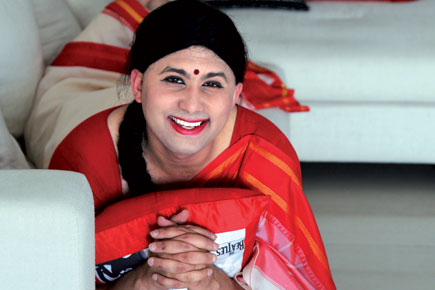 Kasturba Panda ki Pantie cracks jokes about a housewife’s longing for liberation. While the humour may be crass, her desire is not


Something bizarre happened at Akshara Theatre on the night of 24 February 2013. It was the final of the nine shows that comprised the second run of a little play called Kasturba Panda ki Pantie, and the house was packed with people who found themselves raucously rooting for a Delhi housewife, with a standard-issue patriarch for a husband, to get laid.

It is easy to forget that Kasturba is actually Farhad Colabavala, a young male actor with an impressive talent for voices, though that reality perhaps makes our cheering on of her sex-life less inhibited. But then, it is easy to forget it is that same man in a red-and-white sari playing the other four characters—all male—in this tightly staged farce that unexpectedly unfurls into a quick and dirty survey of anxieties surrounding female sexuality.

This, it seems, is unexpected even to the play’s director, Madhav Mehta, who adapted it from Steve Martin’s The Underpants, itself a 2002 adaptation of a 1910 German farce by Carl Sternheim called Die Hose. Mehta didn’t set out to stage a sexual emancipation comedy. He just liked the play and thought it would be a great vehicle for his kind of humour—stand-up comedy meets theatre meets crude jokes cracked with friends over beer.

He wasn’t wrong. A play premised on a woman’s underpants falling down in public creates plenty of opportunities for crude jokes, and Mehta makes full use of them. Asked about the play’s crassness, he says it’s all just good unwholesome entertainment. But pretty soon he’s talking about offensiveness as liberation from the farce of conservatism, and it’s clear there’s more at work in this play than just the prurient humour of 22-year-old boys, though there is plenty of that. Profanity, for Mehta, is an expression of authenticity: “Art is only true without censorship.” Everyone jokes like this in private, Mehta tells me, shrugging, he just decided to put it up on stage.

The play follows the fallout of Kasturba’s public exposure at the Sunder Nagar Diwali Mela—her husband Ranjan’s excessive embarrassment and anger, the attempts of two men who saw her (Kavi the poet and Shantanu the creep) to rent a room in her house and bed her, and her efforts to find sexual fulfilment, assisted by the upstairs tenant, Kishmish, a gay fashion designer. The panty-slip is the opening of a Pandora’s box—it lets out not only Kasturba’s desirability, but also her own desire. All hell breaks loose.

From that moment, everyone in the play is preoccupied with what’s going on in Kasturba’s panties, including Kasturba herself, and the audience is constantly steered toward the absurdity of it—Ranjan’s hyperbolic rant about the mystical power of breasts, Kavi Singh’s rapturous response to a glimpse of Kasturba’s privates, Shantanu’s jealous interference with her attempted affair with Kavi. The comedy, though base, is thoroughly enjoyable and effective, and it derives its potency from relatability. The characters, though exaggerated for effect, all seem recognisable, Kasturba most of all.

The rest of the play is her trying and failing to satisfy that tharak. And the audience is cheering her on the whole way. There is a clear sense of triumph when the play ends in a manner favourable to that objective. “Tharak is universal,” Mehta explains, suggesting that an audience will always empathise with a character’s desire for sex, regardless of gender. One may not agree with this generous assessment of the open-mindedness of theatre-goers, but the effect does seem to have been achieved. The confessional narration, combined with the non-threatening sex of the actor, deftly displaces any squicky moralism in spectators with a cheerful complicity. This, perhaps, is the true meaning of a line in Martin’s adaption: “Desire adjusts morality.”

The moralism displaced in the audience is embodied by Kasturba’s husband Ranjan, who has inherited from his counterparts in previous versions of the play all their classic misogyny and bourgeois deference of money and power. Mehta laughingly admits that Ranjan is in part a release of his inner-misogynist, but almost in the next breath explains misogyny as a defensive response to perceived indignity at the hands of a woman. It is possible to see Ranjan as a showcase of this discomfort with misogyny. It is certainly easy to see him as Mehta’s conduit for everything that’s wrong with conservatism and conventionalism.

Mehta’s adaptation takes up Sternheim’s unabashed lampoon of the bourgeoise, which Martin’s adaptation was seen to have muted in favour of an emphasis on gender politics. The New York Times described this new emphasis, in an early review of The Underpants, as a shift in the play’s political centre. In Sternheim’s original, infidelity is used to illustrate the decay of bourgeois morality. Martin’s play champions desire, bourgeois morality be damned. Mehta’s adaptation, retaining Martin’s shift, flips the function of tharak in the play—sex is no longer part of the problem of middle-class morality, it is now part of the solution.

Were one so inclined, it would be possible to interpret Kasturba’s sexual liberation as one from Ranjan’s world of gambling debts and drinking contests, where the viability of your business depends on your wife’s reputation. You might say her schemes for sexual satisfaction stand for her struggle to take control of her life. You might even say she represents every housewife who has no say in her sex life. Or you might say none of these things, and simply go home chuckling to yourself in bawdy delight.