×
Art & Culture | Inside the Studio 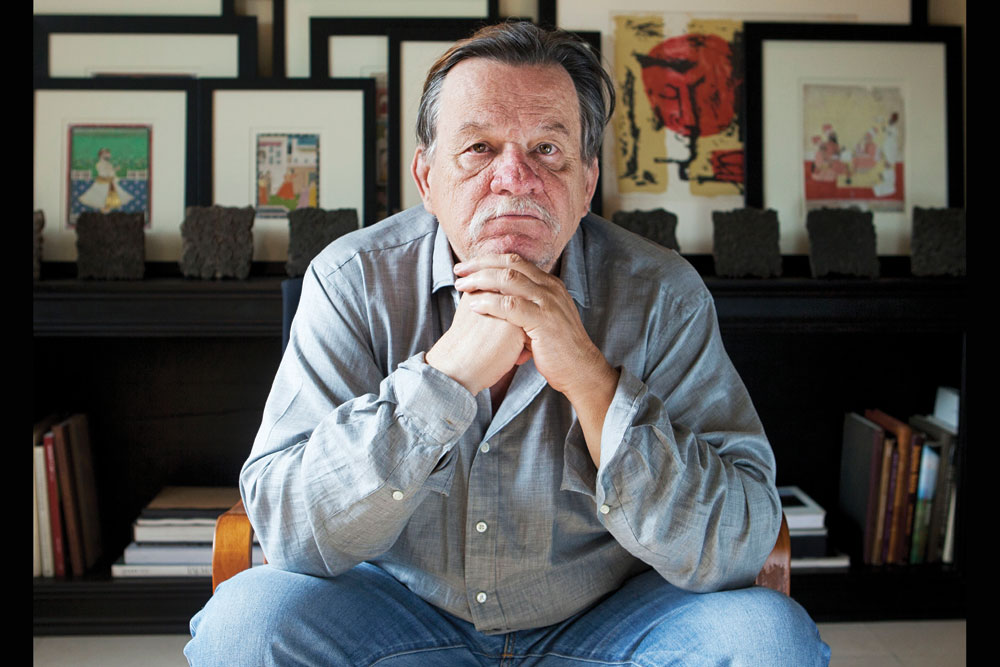 
We Are Always Working is a celebration of the deeply collaborative nature of Milwaukee-born artist Waswo X Waswo’s creative pursuits in Udaipur. Over 15 years, not only did he make the lake city his home, he also built a close-knit community of co-workers whose practices had been otherwise straightjacketed within the territory of craft and confined to the tourist market. The ongoing solo at Latitude 28, New Delhi has bodies of painted photographs conceived by Waswo and handpainted by Rajesh Soni, alongside terracotta works by Shyam Lal Kumhar. The show makes visible the gleefully interactive aspects encompassed in the act of looking and being looked at, by and between the inhabitants of the village of Varda, home to his studio. Going beyond the theatre of villagers playing dress-up, the images synthesise the tropes of the Indian studio photography tradition with a critique of Orientalist and colonial visual discourses, most notably through the careful staging of the photographic representation of Waswo’s miniaturist avatar—the Evil Orientalist.

Curator of the show, gallerist Bhavna Kakar, says, “The title of Waswo’s exhibition ‘We Are Always Working’ aptly describes our attitude at Latitude 28 and our commitment to furthering the cause of contemporary art through myriad ventures and projects over the years. Waswo X Waswo’s exhibition has been our first step into the world of exhibitions both physical and online, post-lockdown and the first effort by an art organisation to host an online vernissage, and the feedback we received has been phenomenal.”

My own acquaintance with the cartoonish figure of the ‘gora sahib’ was in 2011, at the solo Confessions of an Evil Orientalist at New Delhi’s Gallery Espace. Besides the humorous contemporary miniatures, executed in collaboration with R Vijay, whom Waswo credits with co-imagining the figure, what beguiled me was the eponymous text-based work that read like a confessional poem with 101 declarations of privilege-based sins. I was attracted to its whimsical brilliance and how sparingly it managed to communicate the inevitable dilemmas of a white body transplanted from its Western context within a postcolonial context, most notably, how it is fated to predictably fall into and for the same traps and tropes as its predecessors, despite its best intentions.

The list-based text had the authority of a manifesto coupled with the bravado of a sinner who refuses to be shamed by his voluntary admissions of guilt. The vulnerable intonation that marked each confessional sentence gave the reader the illusion of transparency. Waswo X Waswo was not asking for forgiveness for the errors constituted by his white gaze. He was humanising his consciousness, offering it to us as spectacle, while offering an easy template by which to recognise the continuing existence of the Orientalist gaze. Take point 18—‘I have told all my friends how cheap this place is’; or 23— ‘I have made long lists of petty annoyances, because you do not do things as we do them.’


There is immense art historical value embodied within Waswo’s Evil Orientalist. In appropriating the figure of the white male Orientalist, isolating it from its theoretical habitat and placing it, unsanctimoniously, within the familiarity of the mundane, Waswo displaces the white body from being perceived as the event or the spectacle, transforming it into the observer as well as the observed. The medium of satire mitigates and even invalidates the weight of the Orientalist’s observations while the diminutive manner in which he is rendered by R Vijay in his miniaturist avatar, in suit-tie-sola-topi-like hat, makes him a Quixote-like figure who activates the imagery around him by virtue of his presence and his exoticising gaze. Through this appropriative gesture, Waswo finds a way ‘in’. The empathy-fuelled ridiculing of the white Orientalist figure is his way of participating in the black humour of living in a postcolonial reality. Through measured self-deprecation, he gets to share in the joke of the gora sahib to whom, despite the application of an intuitive enlightenment methodology and a rational-minded ethnographic approach, India will remain elusive. It’s a convincing punchline in a city like Udaipur that so brazenly caters to the white tourist gaze, where the Orientalist body is welcomed for its economic currency.

In the film, A Studio in Rajasthan (2017), which offers a generous glimpse into the universe within which Waswo’s studio in Varda is embedded, there’s a poignant moment when Rajesh Soni recalls a not-so-fond early memory with Waswo, whom he, like most friends and collaborators in Udaipur, refers to endearingly as ‘chaacha’ (uncle). Soni, a third-generation hand-colourist (his grandfather, Prabhu Lal Verma, was the court photographer to Mahrana Bhopal Singh of Mewar), found his way into Waswo’s studio through R Vijay, who, at the time, spoke no English. Soni was his translator. He recalls an incident around 14 years ago, when Waswo got into a fit of rage, exhausted at being perceived as ‘Lakshmi’, constantly being made to shell out money. In this ensuing jugalbandi of confessions between the two, one gleams some of the pathos of an alien white body desperate to ‘belong’ through a strategy of espousing belonging, a sentiment Waswo had encapsulated movingly in his 53rd confession—‘I have longed to be embraced by you.’

I wanted the evil orientalist to shed some of that cloak of being the person who is trying to pick things apart, scientifically or academically, and wanted him to be an observer, says Waswo X Waswo

FOURTEEN YEARS AGO, when Soni had visited Waswo in his first studio in Udaipur at Ambhavgarh Hill, which he had rented from the wife of an Indian colonel, he had been making sketches of old havelis on the verge of being destroyed to construct tourist guest houses. He noticed the Epson black-and-white printer in Waswo’s possession. At the time Waswo was conceiving and executing his Studio in Rajasthan series. “I was very much a black-and-white purist,” he told me a week before the opening of the show. Soni saw some of Waswo’s prints and suggested he could colour them. Waswo gave him a couple to attempt. “The first few were too heavily painted and were rather garish,” Waswo said. But Soni was young, barely 18 at the time, and was responsive to suggestions. “Very quickly I could get him to understand that what I was looking for was a soft tinting. I wanted his painting to be more translucent, using watercolour instead of oil-based paints. We’re still working together 14 years later,” he said.

Meanwhile, when the colonel retired from the army, Waswo had to move out of the lower ground floor of their house. He asked his assistant, Ganpat Mali, to keep an eye out for possible studio alternatives while he settled into an apartment in Moti Magri, a hill overlooking the Fateh Sagar lake. Mali found what he believed fitted the brief and was, as Waswo had specified, ensconced in a bucolic setting. Except, the property would have to be shared with the Indian family that owned it. This didn’t please Waswo, who was wary of his past experience with co-habiting in Ambhavgarh Hill. “There were some tensions with what the colonel’s wife perceived as me bringing lower-class people to the studio to photograph them—farmers, tradesmen, small shopkeepers. She was conscious of her aukaat, and I didn’t want to run into a situation like that.”

Waswo refused to see the property Mali had found, until one day, Mali staged a friendly kidnapping on his motorcycle. Waswo eventually caught on, but Mali urged him to simply look at the property before rejecting it. They arrived in Varda and met the brothers, Manohar and Ram Singh, who lived there with their wives and kids, all of whom were surprisingly warm and welcoming.

“The entire village is Rajput, and what they offered me was the shell of the concrete house they had begun to build until they ran out of money. It didn’t have a proper roof over the staircase, none of the rooms were finished in any way, nor was the kitchen. Ganpat told them that there’s this crazy artist who will have it just the way it is, he doesn’t need it finished.” Waswo saw the potential of storage space, a beautiful roof with a panoramic view and a landscape with wildlife amid fields. He negotiated with the Singh family and leased part of their property just before he had to leave for Thailand, for visa-related reasons and to visit his Bangkok-based partner. He had been offered also the patch of land at the entrance, where the family normally grew bindi. He took a photograph of it and drew six beams on the photo, asking Mali to sink six metal poles in those spots and have a sloping tin roof installed and a brick wall that didn’t come all the way up, thus allowing natural light to enter. Three months later Waswo returned to a readymade studio.

In We Are Always Working, Waswo has repurposed the figure of the Evil Orientalist, entrusting him with a less satirical moniker—the Observationist. In the series, The Observationist in a Stolen Garden, a conscious reference is made to the backdrops used by Waswo painted by local artists from Udaipur, with imagery lovingly appropriated from a range of existing miniatures, a subversive remembering of the botanical violence performed by early British colonialists through the Company School style of painting by which local Indian artists were commissioned to paint botanical specimens for an English market and the consumption of the scientific community that was interested in claiming them as their ‘discoveries’. “I wanted the Evil Orientalist to shed some of that cloak of being the person who is trying to pick things apart, scientifically or academically, and wanted him to be an observer, someone who enjoys the process of being in a new land or reality, which he experiences as magical, or delightful, maybe out of naivete,” said Waswo.

All the classic symbols of the Orientalist gaze are present in the form of the subjugating measuring instruments, the fixation with looking at the natives, with ‘master’-ing discourse around their culture.Yet the playful, participative nature of the staging undercuts the severity of the damage perpetrated by Orientalism practised as part of the colonising mission. The studio, too, gets figured, as a proposed site for the enactment of transitional fantasies and the reimagining of proto-utopic, non-hierarchical configurations.

(We Are Always Working by Waswo X Waswo, in collaboration with Rajesh Soni and Shyam Lal Kumhar, curated by Bhavna Kakar, runs till September 28th at Gallery Latitude 28 in Delhi and online)