Rosemary Crill and Divia Patel, co-curators of an upcoming exhibition at the Victoria and Albert Museum in London, talk about the illustrious legacy of Indian textiles 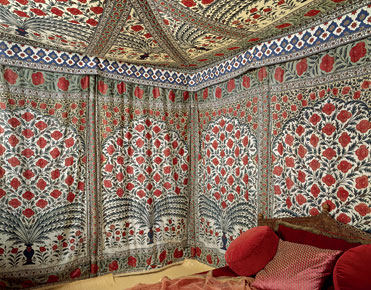 GP Baker was a textile printing firm owner in England and an avid collector of antique Indian textiles. Such was his collection that an admirer once wrote, ‘The stuff which I then saw… I had never dreamt of in my life.’ In World War II, Baker stuffed his collection into tin boxes, which he then buried in his house. It was later discovered that the pit was flooded and the boxes were rusted and over a hundred rare pieces were nearly destroyed. A well-meaning friend advised him: “Why not pass the injured pieces to the Indian collection at the V&A? Commercially they would not be worth the long, tedious labour of preservation. But the Museum has a staff which can tackle such tasks gradually.”

Some of these pieces will be on display at ‘The Fabric of India’, an exhibition on Indian handmade textiles which will open in October at the Victoria and Albert Museum (V&A) in London as part of its India Festival.

Of the 200 handmade objects that will be shown for the first time, every object has a long and fascinating journey. Like the tie-dye work, behind which is a tale of two brothers, Aziz and Suleman Khatri from Bhadli, a tiny village in Bhuj. They make beautiful tie-dye pieces that travel the world, but without their name on it. At the show, they will finally be recognised as artisans. From the earliest known Indian textile fragments dating to the third century to contemporary fashion, ‘The Fabric of India’ will tell a story that has never been told before. Like a Hindu narrative cloth in silk weave depicting avatars of Vishnu from 1570, a 16th century Islamic talismanic shirt, a large floor spread used for decoration in a Mughal court, and a spectacular tent used by Tipu Sultan.

Co-curators of ‘The Fabric of India’, Rosemary Crill and Divia Patel, tell Open about the travails of putting it all together.

What is the essential story of Indian fabric that comes out of this exhibition?
‘The Fabric of India’ gives an overview of the whole history of Indian cloth, while spotlight stories provide more information on particular aspects of fabric. We aim to offer an introduction to the raw materials and processes of making cloth by hand and to examine how fabrics were used in courtly and spiritual life. The exhibition will explore the historical and the ongoing importance of textiles to the economy of India, revealing both the long history of the global export of Indian textiles, [and] also showing how industrialisation threatened to eradicate Indian hand-making skills in the 19th century and reversed the textile trade. It will go on to reveal the consequences of this exchange, illustrating the way in which European developments in industry provoked a resistance movement which saw textiles take on an important role in the development of Indian nationhood and identity. The final section will explore India’s dynamic contemporary fashion industry and its continuity of India’s textile traditions.

The exhibition delves into the social, political and economic aspects of Indian textiles. How has that been achieved?
The social, political and economic aspects of Indian textiles will be explored through a wide variety of objects. We will show how ancient the economic story of the Indian textile trade is by including the earliest surviving Indian textiles, while the scale of global export is shown through chintzes popular in Europe and ceremonial cloths made for the south-east Asian market. A focus on bandana handkerchiefs will illustrate not only the wide geographical spread of India’s textile trade but will also reminds us of the fact that the majority of pieces were very ordinary, everyday things. We will go on to show cloth spun in English mills to indicate how industrialisation threatened the textile trade. The resistance movement and Mahatma Gandhi’s message of self- reliance is explained through the display of lengths of khadi alongside contemporary interpretations of the fabric.

The exhibition spans the geographical breadth of India. What are the regions covered?
A huge variety of textiles and techniques will be shown from many different parts of India to create an exciting visual compendium… We will show fibres and raw materials, including silk from Assam, pashmina from Kashmir and cotton from South India. We will also explain how the techniques of dyeing, printing, weaving and embroidery carry strong regional associations. These regional variations not only make the exhibition dynamic and varied, but also give the visitor a strong impression of the contrasts between the textiles of, for example, east and west India or more locally, between block prints from Rajasthan and Machilipatnam.

What, for you, are the highlights of the exhibition?
There is such a variety of pieces on display—many of which we cannot usually show due to restrictions on space—that it is difficult for us to choose favourites. However, particular highlights will include an enormous tent used by Tipu Sultan dating to [the period] 1725–50; a vast 20th century wall hanging from rural Gujarat, decorated with a parade of people and elephants, which was discovered abandoned on the streets of New York in the 90s and which has never been displayed before; an exquisite Mughal hunting jacket from the 17th century, considered one of the finest examples of Mughal dress in existence; a highly embellished costume from the film Devdas; a huge 18th-century South Indian wall-hanging which we are borrowing from India’s National Museum; and a Rajesh Pratap Singh jacket inspired by the ajrakh printing technique which incorporates a skull into its complex pattern.

Tell us about some of the oldest pieces in this exhibition.
Three archaeological fragments representing the very earliest surviving Indian textiles will be on display at the exhibition. One was excavated in 1906 by Marc Aurel Stein at the oasis city of Niya in present-day Xinjiang in China and dates to the 3rd century. The other two pieces were discovered in Egypt: one has been carbon-14 dated to the 8th century, and the other dates from the 1300s. These pieces illustrate both the long history and the wide geographical spread of India’s textile trade.

While looking at fabrics, patterns and embroidery, did you find any hidden stories?
The exhibition will display a rare example of a textile with a maker’s ‘signature’: one of a pair of gold- woven kamkhwabs, in a trellis pattern in gold and silver with flowers, it is inscribed in Persian script and Latin lettering with thick gold-wrapped thread that identifies the piece as the work of Budhu, a resident of the Rasulpur district of Benares. The unusual inscription suggests that the pieces were ordered especially for display at London’s 1851 Great Exhibition, from which the V&A purchased them.

The exhibition also includes a conference on Indian textiles. Can we forecast what the future could be for handmade Indian textiles?
Many contemporary designers are engaging with traditional hand- making techniques to give their pieces a distinct Indian identity. This is something we explore in the final sections of the exhibition, where we will display a select range of pieces that are highly imaginative and innovative in their approach, combining incredible hand skills with Western silhouettes, such as Rajesh Pratap Singh’s printed jacket and Manish Arora’s heavily embellished garments. The iconic sari, symbol of India’s national identity, has undergone a transformation in recent years. Responding to the changing environment and fears of global uniformity, the sari has emerged stronger than ever, and many designers are engaging with hand-making in this area. There are, of course, many factors that still threaten hand-making in India, from mass production to the gradual loss of traditional skills. The international conference and other related events taking place during the run of ‘The Fabric of India’ will explore these wider topics.

The National Museum in Delhi gets the most visitors for its textiles and jewellery exhibitions. Is that true for the V&A as well? What draws people to these?
It is certainly true that textile, fashion and jewellery exhibitions are very popular; at the V&A, we do find that exhibitions on fashion, textiles and popular culture are among our most well attended. There is an evident desire for this type of exhibition from our audiences, as the content is something that relates to all our lives, about which we have to make choices every day. The V&A has been mounting such exhibitions for many decades, and we’ve developed a reputation for shows that are both beautiful to look at and also rigorously researched and prepared. We are seeing more exhibitions on this subject as it is now more widely accepted as a serious art form. n