View from Down Under

Even as Australia faces the heat over racist attacks, four photojournalists from the country present their picture of South Asia. 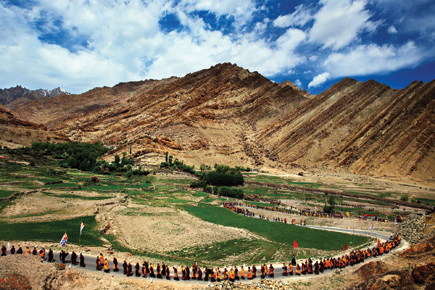 Even as Australia faces the heat over racist attacks, four photojournalists from the country present their picture of South Asia.


Timing, as any photographer will tell you, is everything. So, at a time when memories of the attacks on Indians down under have not yet faded, an exhibition by Australian photojournalists on South Asia is probably a pretty smart diplomatic move by the Australian High Commission. Interestingly, at the height of the tensions between the two countries last October, the High Commission had organised a show celebrating Australia’s multi-culturalism, called All of Us.

Crossing Paths brings together the works of three Australian photojournalists and a television cameraman in South Asia. The regions covered are India, Pakistan, Afghanistan and Bangladesh. There are eight photographs each by Graham Crouch, Daniel Berehulak and Adam Ferguson, and a video by Wayne McAllister. All four are based in Delhi, though Ferguson spends vast stretches of time covering the war in Afghanistan. And all are your regular overachieving photojournalists, scoring covers for Time and Newsweek as a matter of routine and scooping up international awards with astonishing efficiency.  The show doesn’t have a curator, but has been largely coordinated by Crouch. Each photographer, though, edited his own pictures. The photographs are mostly those taken on assignment. Which opens up a window for us to see how India and South Asia are covered by the Australian and foreign press.

Ferguson’s section is entirely on the war in Afghanistan and almost entirely in black and white. Stunning moments of ravaging grief. The unnerving stare of a dead man. The desolation of a fully-armed soldier dressed for combat—more machine, less man. One image in particular stands out: a man looks into an observation device, his face bathed in green light. He could be acting, a pantomime artist, but he’s a soldier on night duty. This then is the pantomime of war, which gives men green faces and robs them of their sleep.

It’s impossible to peel your eyes away from Daniel Berhulak’s Benazir Bhutto. Her face is almost half-hidden, yet there is no mistaking those proud features. The accompanying caption reads, ‘Benazir Bhuttto adjusts her head scarf.’ Newsmen that they all are, all photographs come with typically simple, unadorned descriptions. No fancy titles, no ‘broken dreams’ or the like. Somehow, it makes the pictures that much more enigmatic, leading you to search out the stories behind them. “It was the day she returned to Islamabad after her exile,” says Berehulak. “It was crazy covering the story, more than a hundred thousand people turned up to greet her. And then, there was this blast. This was taken at an intimate meeting she held with select journalists after a prayer ceremony for those killed.”  Most of his other work features India, some of them taken by a camera phone on a day off. But there is this one unforgettable image: a girl in a refugee camp in Pakistan, cradling her brother in her arms, her eyes barren with loss. What friends did she leave behind, this silent girl, what dreams?

A visual and literal relief from the grimness and black and white is provided by the work of Crouch, most of which features India. Sunny and colourful in treatment, the photographs mirror the effervescence of the affable and deceptively young-looking Crouch. He likes it here and you can see it in his work, even if some of the images seem somewhat stereotypical of the exotic India that leaps to the White man’s eye. Strangely though, Crouch has left out the image that won him this year’s Prix de la Internationale award for photojournalism. The scream of a skeletal, malnourished boy being weighed on the scales. The reading: 5.06 kg. It’s not shocking, it’s heart-stopping.

Crossing Paths will show at the Australian High Commission in New Delhi from 21 June to 2 July. It then moves to Mumbai and Dhaka.