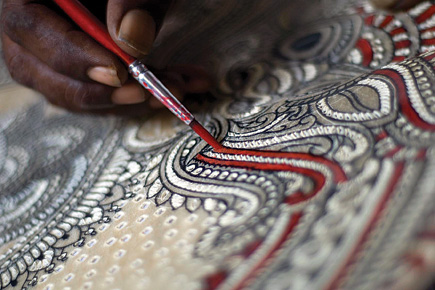 Dr Annapurna Garimella is a fussy woman, fussy about work, fussy about labels. Congratulate her on putting together what is possibly India’s biggest tribal art show, and she shoots back, “Many of the artists are not tribals, so that’s inaccurate.” How about native art? “If a Madhubani painter uses tubes of paint manufactured in Japan, can you call that process of creating art native?” she throws back at you. Aha. “I chose the term vernacular with care. It signifies a traditional art language without the limitations that the terms ‘folk’, ‘tribal’ or ‘native’ have.”

You know better than to argue with her because the fussiness has paid off, and splendidly too. In 2007, the art historian and designer took up an ambitious—in fact, audacious—project: assembling the finest practitioners of traditional art forms from across the country. Three years of this, letters to 300 artists in an assortment of regional languages, and travel to pretty much every part of India (except Goa, Kashmir and the Union Territories) later, the big idea has culminated in a hugely interesting show titled Vernacular, in the Contemporary.

“Actually, it was five years ago that Anupam and I started discussing the possibility of doing something like this,” she says, referring to Anupam Poddar of the Lekha and Anupam Poddar Foundation that owns one of the most exciting collections of contemporary art in India, some would even say Asia. But the collection, housed at the Devi Art Foundation (DAF) in Gurgaon, also includes what Garimella calls classical forms of folk and tribal art. A selection of these is part of the show.

So keen were the Devi Art Foundation and Garimella’s company, Jackfruit Research and Design, to select the best folk and tribal artists from across the country that they didn’t go merely by reputation or recommendation. A public notice was put out in newspapers, announcing a programme in art, much like the way universities seek applications for courses. In addition, suggestions were sought from DAF and colleagues working in art, NGOs in the field were consulted, newspapers were scanned, and the internet was scoured. Letters were sent out in a variety of regional languages, and 175 artists responded with portfolios. Finally, after conversations in a variety of languages, 30 artists were commissioned to create works for the show. So there is Pata Chitra painting from Bengal and Orissa, Phad scrolls from Rajasthan, Chittara art from Sangam district in the Western Ghats, leather puppets from Dharmavaram in Andhra Pradesh, Bhuta sculptures from Karnataka, among a host of others. As if Dilli Haat has moved in to a museum, only edgier, wittier and more self-assured. The show has been divided into two parts. The first part, titled ‘Working’, has 180 works by 32 artists. Part II of the exhibition, titled ‘Working Consciously, Working Reflectively’, opens in March 2011.

Rare is the kind of detail, rigour and love with which Vernacular, in the Contemporary has been accomplished, and this story is as much about that process as the art. A team of nine researchers from Jackfruit Research and Design crisscrossed the country over a period of five months to meet the artists and discuss their work.

A photographer, the well-known photojournalist Fawzan Hussain, was also commissioned to document the process. This is interesting, possibly marking a beginning of the practice of archiving the artist at work in India. It is standard practice in the West to document artists in the process of creating art. Why is this important? “Because then we have a record of, say MF Husain’s influences while painting something when fundamentalist forces like the BJP and RSS attack his work,” says Garimella. A website is also being created for the project, where all the photographs, artworks and field data will be uploaded.
Photographer Fawzan Husain says this is the first time he was offered an assignment like this, and he grabbed it. “I remember meeting this leather puppet maker, S Anjaneyulu, in Dharmavaram village in Andhra. Leather puppet shows used to be the main form of entertainment here. Movies changed all that, of course. This man, perhaps, is the last such artist remaining. These puppets are usually 6-7 feet high, figures from the epics. It takes more than a week to create one. His sons cannot afford to carry on his legacy. Yet, this man continues to create, showing up cheerfully for work every day, let down perhaps, but not betrayed enough to abandon his art. I won’t forget that man’s face,” recounts Husain. Thirty of Anjeneyulu’s puppets are on display at the show, accompanied by a four-hour video recording of a performance of Bhakta Prahlada. Usually, such performances are pared down, but Anjaneyulu and his family insisted on recording the entire piece.

The show is spread over four rooms, with one section being devoted entirely to Husain’s photographs. Something of this scale, scope and spirit is difficult to take in on one evening, yet some works leap out at you. Like the graphic novel, Lalgarher Maobadi naa Maobadider Lalgarh, by Anwar Chitrakar, a pata chitra artist in Bengal. Pata is the tradition of telling stories through painted scrolls, accompanied by song. Anwar’s work has 20 plates and each of these plates has been framed so the paint and texture don’t spoil.

Sculptor L Rathakrishna has rendered the 108 karanas of the Natyashastra in bronze. This, possibly, is the first time this has been attempted by an artist other than in a temple: karanas are usually carved on the outside of a temple. So Shiva becomes less of a god, and more of a performer.
Most fascinating of all are Ghanshyam Nimbark’s Niraja, Pat Jhad, Purana Ped and Dhundti Chidiyan. A miniature artist and calligrapher, Nimbark has drawn stanzas of poems, one his own and the rest by noted poets like Mahadevi Varma, on his canvases. Refreshing, smart and simply why-didn’t-I-think-of-that.