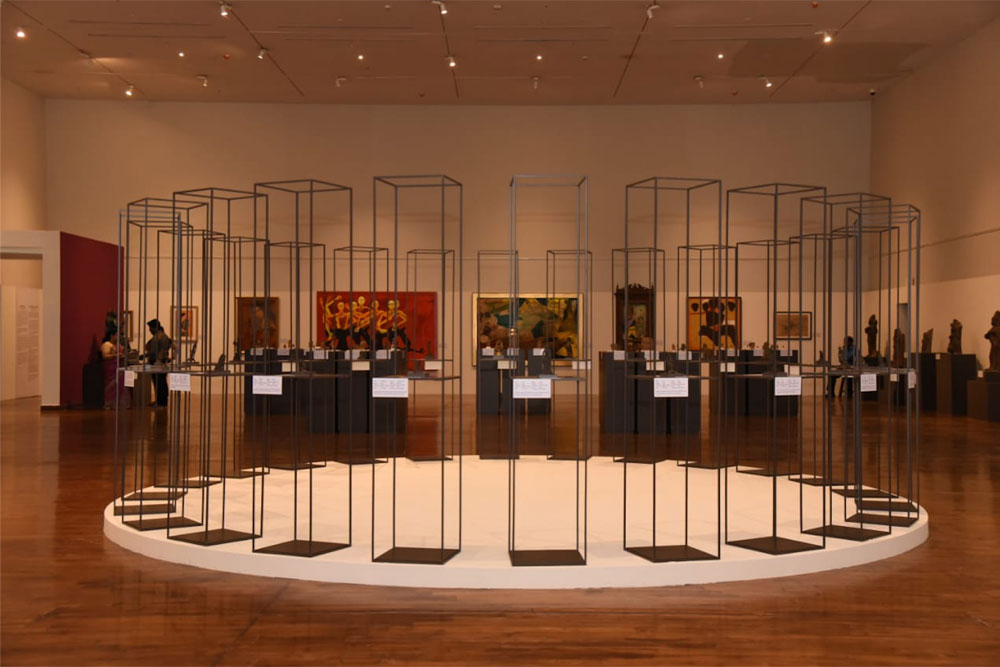 
Bihar Museum’s new exhibition, Women and Deities: Women through the Ages, is a fascinating insight into how women have been perceived over 2,000 years. The entire display, which opened recently in Patna, is engrossing. One particularly eye-catching object is a small bronze head of a woman by Ravinder Reddy (2011). The gold paint, the black hair, etched eyebrows, the wide dark eyes outlined in black, and the overall expression of immobility brings to mind the gold masks on ancient Egyptian mummies. It is part of the contemporary display of this exhibit, and an example of the sweeping imaginations that such portrayals express.

Women and Deities, comprising objects and paintings of women from the 3rd century BCE to 2017, traces the evolution of the artistic portrayal of women of the region, from the ordinary and unnamed, to goddesses and royalty, in a linear manner. The exhibition was launched on August 7, on the Museum’s Foundation Day, and was attended by Nitish Kumar, the museum committee’s chairman and the chief minister of Bihar.

“We wanted to do something different for this Foundation Day, which was celebrated for the first time since the inauguration,” explains the museum’s director-general Anjani Kumar Singh during a recent walkthrough. He adds that it was decided that objects from the museum’s vast reserve would be placed on view for the first time and that art historian Alka Pande, who had been the project director of the Bihar Museum Biennale last year, would curate it.

The exhibits range from astonishingly well-preserved and detailed small terracotta statues, to larger, fully formed stone and metal sculptures, to intricate, delicate miniature paintings to more freely imagined contemporary images. The venue is airy and spacious, with plenty of room for each of the 166 items on display. Gesturing at the displays of the artworks of women, Pande says, “There’s lots more. This is the tip of the iceberg.” One of the curators, Ranbeer Singh Rajput adds, “We decided to go through our own reserve collection for the Foundation Day.” The collection had many artefacts depicting women in different forms, as unnamed women, and as devis and apsaras, in different mediums such as bronze and terracotta, which led them to conceptualise an exhibit centred on women. Singh makes the point, “Ordinary women are portrayed alongside powerful women, and their significance should be recognised.”

Through the arc of the exhibition, the changes in the way women have been portrayed in art can be tracked, from 2,000 years ago to contemporary times, when artists such as Anjolie Ela Menon, Jogen Chowdhury and Jayasri Burman have brought their modern sensibilities to the representation.


Much thought has gone into the planning and arranging of the exhibition. It was conceptualised in February, and the curators worked continuously from April to July.  Pande, based in Delhi, had to fly to Patna on a regular basis. “It was a huge learning process,” she says. “The material had come in from the Patna Museum, which had been set up in 1917.” Adding to the difficulties was the fact that a lot of the data hadn’t existed as it was a very large reserve collection, so putting together ascension numbers and research, and generating content was a challenge for the team of curators Rajput, Nand Gopal Kumar and Moumita Ghosh, who chose the exhibits from the vast reserve. “Everything in our reserve is now in digital archives, so that made our task of selecting 166 out of 200 artworks a little easier. The process took one month,” says Rajput. Pande edited and fine-tuned the process, and in the end, as she says, the best was finalised for the exhibit.

The museum, inaugurated in 2015, covers 13.5 acres, with nine permanent galleries, and seven courtyards. It is an initiative of Chief Minister Nitish Kumar to build up Bihar’s soft power of culture and tourism, drawing on its storied history. Bihar after all is the seat of the first republic in India, and the site of the 16 Mahajanapadas including that of Magadha. The ancient capital of the Mauryan Empire, Patliputra was also in this state. Many renowned Buddhist sites are to be found here. It’s also known as the land of five religions, and its rich history has carried on from the ancient to the medieval period, to modern times.

The museum has succeeded in its efforts in showcasing Bihar’s layered heritage, housing over 30,000 objects. The displays are well mounted and many of the exhibits spectacular. Sections such as the Regional Art Gallery have detailed modelled villages under glass cases. Each display is interactive, inventive, and explained with the benefits of technology. All galleries are equipped with HD audiovisual and touchscreen displays. The Bihari Diaspora Gallery, for instance, has an interactive map, which charts out the growth of Bihari culture in other countries. These are also found in The Children’s Gallery, which has several displays with touchscreen panels that encourage visitors to do interactive exercises on art and culture. All of it, including the architecture and planning, is on par with the highest international standards. It is a rare example of a state-funded museum which is state-of-the-art and based in a state capital, rather than in one of the metropolises. It is not surprising that it has a footfall of 2,000 visitors on weekdays and more than 3,000 on weekends.

The terracotta figures  in Women and Deities from the reserve collection are exceptional. Terracotta is one of the earliest mediums which lent itself to elaborate carvings. Though the antecedents of many of the figures are unknown, art historians believe they are among the early representations of women. Unlike the later art forms, which show idealised versions of the feminine form, these sculptures appear to present women of the time as they actually were. Even so, looking at the incredible detail of the small figurines, with their intricate and varying headdresses, dating from the Harappan to the Pala periods, Pande says, all these figures, such as the Smiling Girl, an unknown woman from the Mauryan period with an elaborate headdress, are unique. That level of detail can also be seen in the figures, such as the Saptamatrikas, a group of seven mother-goddesses.

Coming to the medieval period, the metal sculptures depict powerful women. The sculptures are more streamlined than their stone counterparts with smoother outlines and narrower waists. In several bronze sculptures of the goddess Tara and other deities, one finds a sense of combined serenity and strength.

An alternative notion of female beauty can be seen in the remarkable stone sculptures, whether they are nameless figures, or goddesses like Ganga and Parvati. Pande says, “The women here are very well-developed with more defined feminine contours,” as opposed to the more basic forms of the terracotta figures, or the metal sculptures, which are less voluptuous.

In her view, with the stone sculptures, the ideal form was achieved in the Gupta period. “From the Gupta period in the 4th century, right up till the 15th century, you will see a similar kind of formation of the feminine form. They have very well-rounded breasts and childbearing hips. The facial quality of the sculptures is also different. What is seen in Khajuraho, for instance, is different from Karnataka, because only the local features are taken.” It is in these stone samples that the range of women can be seen, from unknown, unsung women to celestial beings.

These formidable women give way to the more sedate and decorous representations in the elaborate miniature paintings on display. The 56 paintings in the exhibition date to the 17th century and are in the Pahari style, based on the features and form of Pahari women. The women depicted in the extensively detailed, soft hued paintings are delicately built, doe-eyed and demure with fair skin. Even their poses are largely passive and ornamental, whether they are holding flowers or musical instruments, they appear generally less assertive than some of their stone, bronze or terracotta counterparts.

In the Contemporary Art section (1962-2017), one observes these feminine attitudes develop into a less contained and less conformist style. Each of these 10 artworks, reflect progressive attitudes and represent women who are introspective and strong. One painting in particular, Radha by Suhas Roy (2016), shows the gopi in an intriguing light. Traditionally, depictions of Radha are romantic, pensive and mysterious. Here, set against a dark red canvas, and surrounded by dark leaves, this modern Radha, though still sensuous, seems grave and determined to follow her own course. This Radha, like other women in this display, has aspects relatable to the viewer, even across centuries.

Although not part of the Women and Deities exhibit, an integral and perhaps the most famous example of historical female representation in the state is found in a permanent part of the museum. This iconic artefact is the renowned Didarganj Yakshi, from the Mauryan period in the 3rd century BCE. In pride of place at the Historical Art Gallery, this sculpture stands tall on her own platform. With her highly polished and superbly carved form, and casual, yet powerful stance, she gives the lasting impression of perfection, despite a missing arm, and noticeable disintegration on one side. The Didarganj Yakshi is the crown jewel of the museum, and those looking for examples of female empowerment should not miss it.

Pande attributes the exhibition’s success to the strong support of the state government. “The arc of the exhibition is incredible, with the continuity of the representation of women and deities, over 2,000 years. It is an unbroken tradition,” she says.