Unhurried Hurricane of the Hills

In this northeastern hill town, you don’t need a weatherman to know which way the wind blows. It’s Bob Dylan all the way. 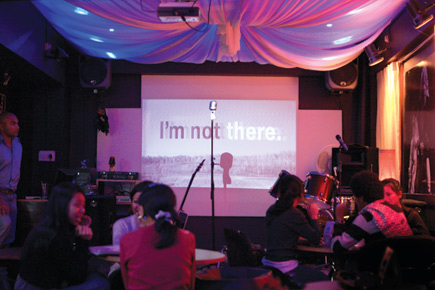 In Shillong, you don’t need a weatherman to know which way the wind blows. It’s Bob Dylan all the way.


Many years ago, this was a quaint town with neat cottages set amidst pretty gardens, surrounded by conifer-covered rolling hills, where people led unhurried, uneventful and uncomplicated lives. A motley lot they were, for sure, but bound by a common thread: music. Music defined life in Shillong, and, in turn, Bob Dylan defined music. To a great extent, he still does. But more than that, the evolution of this picturesque hill town, which was proud to call itself the ‘Scotland of the East’, coincided—uncannily but subtly—with Dylan’s own evolution. With about a decade’s lag, though.

The early 60s, when Dylan debuted with his folksy lyrics and music, were idyllic days in Shillong, Meghalaya. And then the Freewheelin’ Bob Dylan happened, changing everything forever. Shillong connected instantly and instinctively with the spirited soulfulness of Dylan’s music. His lyrics, and his lived-in voice that was a perfect fit for the easygoing character of this town, made a close connect with legions of local guitar strummers and nasal yodellers. A connect that has withstood the test of time. For Dylan fans in Shillong, the Dylan factor is something they find hard to explain, at least in words.

“Why Dylan?” counters Robert Garnett Lyngdoh when asked about the interlink, before answering his own question: “Dylan’s style was free, simple and the imagery was something we could easily identify with.” Lygndoh, who now heads a prominent NGO after a decade-long stint in politics—he served variously as the education, tourism and home minister of this hill state—identifies closely with the American folk singer. “Dylan was never static, he was constantly evolving. And that coincided with my evolution as a musician as well. Dylan was the inspiration for me to write my own songs, my own poems,” Lyngdoh tells Open.

For 32-year-old Donald Syiem, Shillong relates very comfortably to Dylan. “It’s easy for a small place like Shillong, where people grow inward more than outward, to connect with Dylan,” he says. The fact that Dylan is associated so strongly with folk-rock is perhaps a big reason that Shillong’s people identify closely with the balladeer. “Our own Khasi music also belongs to the folk genre. It’s a lot of story-telling, like Dylan’s lyrics. This is perhaps where the affinity comes from,” says Rangdap Cooper Kharshiing, a prominent Shillong musician.

But the person who best symbolises the living link between Shillong and Dylan is the iconic Lou Majaw. In fact, he personifies the bond between the musician-philosopher and this place. After all, he himself is so much like Dylan.

“I owe everything to Dylan,” Majaw tells Open. He’s the main force behind the musical bashes that Shillong hosts every year on 24 May, the 1941 day of Dylan’s birth in Duluth, Minnesota. It’s a hill tradition that goes back roughly nine months or more after that seminal concert in Woodstock, New York (where Dylan famously had a home with a basement), that has come to engage the consciousness of more than a single generation of music lovers. “It was in 1970-71 when I started thinking about what I could do for Dylan, who has given me and the world so much,” says Majaw, “Sending him a birthday card would have been so mundane, so I came up with this idea of celebrating his birthday. We’ve been doing this (annual concert) since 1972.”

The first few years, Majaw and his band—Great Society, which marked Shillong’s musical coming of age—played Dylan numbers to wildly cheering fans every 24 May. “That changed slowly, and now we have people playing their own compositions, reciting their own poems and discussing Dylan’s works, with a few numbers like Mr Tambourine Man and Buckets of Rain being sung. That’s because it would be absurd if we just keep singing Dylan’s compositions—it would go against everything Dylan stands for. Dylan is meant to inspire us to write our own poems and lyrics and do our own thing,” says Majaw.

A self-taught musician, Majaw heard Dylan for the first time when he was part of a band playing numbers at nightclubs in Calcutta in 1965. “I heard Freewheelin’ and that changed my life,” he recalls. This, incidentally, is exactly what all Dylan fans in Shillong say: that their lives changed forever after hearing or reading Dylan. Majaw is now engaged in an ambitious project to ‘take Dylan to schools’. “I’m now trying to make Dylan’s music educational,” he says, “And the response from the kids has been great.” In support, 24 May next year will see the release of a Bob Dylan almanac.

Majaw and his associates, of course, are only a few of the many who celebrate Dylan’s birthday with such gusto every year. Local FM and radio stations play his songs all day. Red FM station head Ian Khongmen, yet another Dylan loyalist, tells Open that 24 May is a special day for his channel. “Apart from Dylan numbers, we have people reciting his poems, and we organise a series of talks and discussions on Dylan and his works throughout the day,” he says.

Shillong is perhaps the world’s only place where 24 May is celebrated with such gusto. It is also the place where FM stations play at least a dozen Dylan numbers daily, no matter which. And not just the popular ones like Blowin’ in the Wind or Knockin’ on Heaven’s Door, but the entire repertoire. “This year, the Dylan specials were on air continuously, without a break (save for the commercials) from 7 am to 10 pm. The response from listeners was fantastic,” says Khongmen.

Dylan fans here say that they even draw inspiration from him in their professions. “A lot of my work is inspired by Dylan. He had said that everything is inter-related and bonded. The same applies to my work, where a structure, comprising small units, is created out of empty space,” says Donald Syiem, an architect. Lyngdoh agrees. “Dylan has been the catalyst for me to write poems and songs. And for me, writing has been a sort of safety valve that releases the pressures of life,” confides Robert Lyngdoh, adding that Dylan would definitely have been an influence, albeit subconscious, in his decision to quit politics and turn to social service.

RACE THAT GOES TO THE WORTHY

So, what ultimately is it about Dylan that people like Lyngdog, Majaw, Syiem and so many others in Shillong find so irresistible and special? Explanations vary. For Syiem, Dylan is special and stands apart from other musicians because, “he takes a subject and explains it in a manner you can easily understand”.

Khongmen’s take is that Dylan turned folk-rock into a baroque art. “Dylan’s message became a new liturgy for a secular society,” he explains.

Lyngdoh says that Dylan’s specialty lies in the “intense inspiration he provides to be creative, think independently, question the accepted rules and norms, and get off the beaten path”.

However, to say that all or even a large section. of musicians and music lovers of Shillong are Dylan fans would be incorrect. “All Dylan fans are in the 30-plus age group. There are very few youngsters who listen to or get inspired by Dylan as in our times,” says Khongmen.

“We don’t listen to, or play, Dylan,” says Jason Manners, who sings for Pip of the Fourth Mother, a popular music group here. Patrick Khyriem, the band’s bass guitarist, also admits that he doesn’t remember when he last heard a Dylan number.

Grace Miller, the lead vocalist of the popular all-girls group Afflatus, tells Open that Dylan is just one among others like the Beatles and Jim Morrison that she used to listen to. That said, they all concede that Dylan is an integral part of the music scene in Shillong. “Dylan is part of growing up in Shillong,” says Grace, while Jason confesses he’s in awe of Dylan as a “brilliant lyricist”. “After all,” adds Patrick, “Dylan set the musical ball rolling here.” Aye, and aye again, to that.

Dylan just can’t be separated from Shillong. “Dylan’s influence is always there. Whenever a youngster puts pen to paper to write his or her own poems or lyrics, that’s Dylan’s influence,” says Syiem. “His influence as a muse for original compositions and work just can’t be denied,” adds Lyngdoh. Majaw, on his part, is busy mentoring and guiding new bands and pushing them to come out with their own songs. All this, to ensure that Dylan remains part of Shillong. The town might have metamorphosed into a concrete jungle, but it’s a place where one can still hear snatches of Let me die in my footsteps or Who killed Davey Moore from the odd window or passing taxi. For, the character of Shillong and its people remains the same—they won’t be pushed around. And they do what they like doing. As Dylan says: “A man is a success if he gets up in the morning and gets to bed at night, and in between does what he wants to do.”