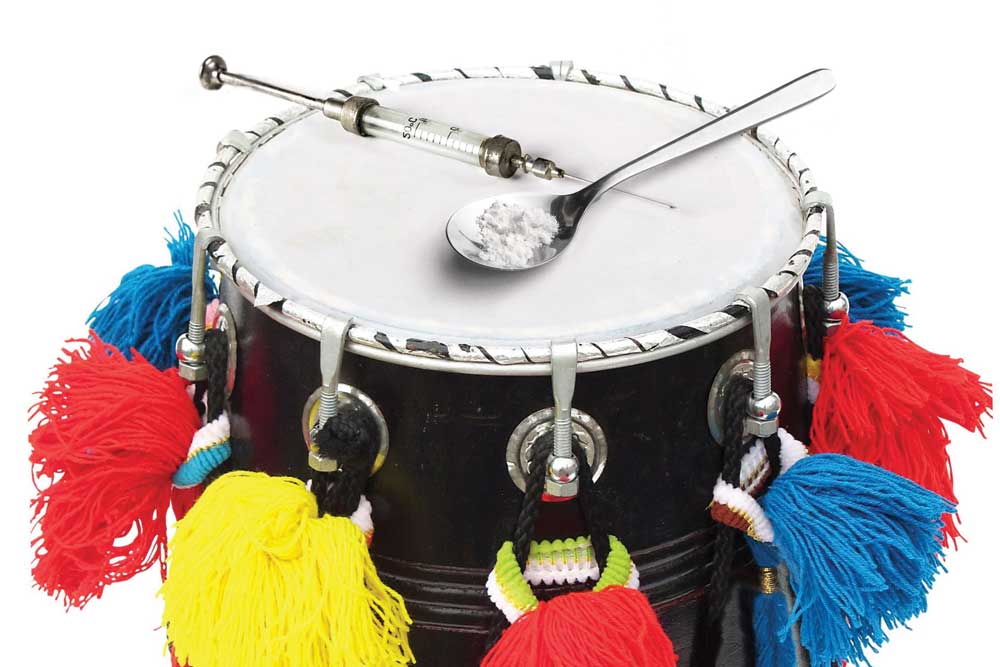 IN UDTA PUNJAB, inside the den of drug smugglers (which is also a regular home), the boss gestures towards the courier, who has missed a drug consignment worth a crore of rupees, and orders his flunky to throw him to Jackie Chan, his hunting dog. “Maareyo na. Family relation hai (But don’t kill him. We are related),” he whispers.

This could be a usual scene in a Hindi film on drug smugglers except that the boss is a turbaned man in his fifties with a lush salt-and-pepper beard, a Sikh man who breaks an important code of Bollywood’s Punjab myth—Sikhs are never villains. In any other mainstream Hindi movie on Punjab, a man like him would have been a benign patriarch, angry but noble, violent but fair, a tough but gold-hearted man. The ironic reference to ‘family relation’ brings to mind the extended family in other Punjab movies, which exudes laughter, warmth and sincerity. His wife, who could pass off as an affable maasi in any other Hindi movie on Punjab, looks credible enough when she holds a gun to a boy’s head in the last fight scene.

Udta Punjab lacks all that a ‘good’ Hindi movie on Punjab must have: swaying mustard fields, large tumblers of lassi, gallant do-gooders, close-knit clans, fawning uncles and aunties, dance and festivities, dhol beats in the background, dressed up lasses and jokes that launch waves of laughter. You won’t see elders starting every sentence with ‘Puttar’, an aunty saying ‘sadke jaawan’ , or the young ones saying ‘perin paina’. Udta Punjab gives you Punjab, the north Indian state, and not the idea of Punjab, the myth that pervades cinema and advertising.

With documentary-like zeal for the raw and uncut, the movie upends the popular idea of Punjabiness and presents a Punjab rarely seen in mainstream Hindi films such as Dilwale Dulhaniya Le Jaayenge, Rang De Basanti, Jab We Met and Love Aaj Kal. Its portrayal of Punjab and Punjabis is shocking not just for the grim reality it offers but because it breaks away from a carefully crafted idea of Punjab that Hindi cinema has come to follow for decades.

There are two Punjabs. One where agriculture is declining, drug use is rampant, the economy is in ruins, and girls are killed before they are born. The other Punjab—that belongs to advertising and cinema—has slowly veered so far from reality that it has become a feel-good myth that reassures people that somewhere a land of plenty and prosperity still exits. The myth is so pervasive in Indian pop culture that it overwhelms real issues of the state. Few would be willing to believe that the balle-balle land has a high number of farmer suicides and the state government has to pawn its properties to pay salaries to its employees. Even the candour of Udta Punjab may not have found so many takers had it not run afoul of the Central Board of Film Certification (CBFC). By bridging the gap between the popular idea of Punjab and the state as it really is, the film creates a new genre of Punjab movies.

Da Gabru, the title of rock star Tommy Singh, is a giveaway of the state of Punjabi youth. The word gabru has a cultural resonance that suggests good health, passion and chivalry

The so-called Punjabi culture—work, eat and make merry—emerged from a frontier and agrarian society. In a war- ravaged region that faced attacks and invasions for centuries, whatever you consumed was yours and looters could take away whatever you had saved. High consumption was fuelled by hard work in the farms and the constant threat of plunder. Today what we know as Punjabi culture is a post-industrial phenomenon transplanted from agricultural fields to the shopping malls. Removed from its original context, it has become the equivalent of a native translation of the modern Western culture of consumption. That’s why there was a spurt of Punjab references in advertisements and cinema after economic liberalisation. The idea of Punjab provided the language to express and understand consumerism in post- liberalisation India.

The rise of Punjab in popular culture can be directly linked to the rise of commerce after economic reforms. The idea of Punjab was an idea of excess. In frugal pre-liberalisation times, Punjabi lavishness did not qualify as a national theme. But when shopping malls, foreign investment and private jobs brought consumerism to India, its only desi translation could be found in Punjabi culture. Sturdy Sikhs in ads or hints of Punjab such as dhol beats and vernacular phrases became a native legitimisation of excessive consumption, which was originally a Western idea.

To tell people to eat more, you just have to show a well-built Sardar in an ad. You could lure people to spend beyond their means by writing ‘chak de phatte’ in an advertisement. The Hindi film industry has been dominated by Punjabi men for long. From Dev Anand to Rajesh Khanna, many big stars were Punjabi and so were the big producers. But Punjab figured little in Hindi films. Seldom was a film wholly set in Punjab and one could not consider the possibility of a turbaned hero. After liberalisation, Hindi cinema too was awash with Punjab because Punjab had become a national idea. In a pre-liberalisation cash- strapped India, Punjab and Punjabis were a joke. As a national culture of consumption spread, Punjab became the template. The idea of Punjab bolstered the myth of total happiness purveyed by the advertiser. It legitimised the myth that you will be happy if you have more. In its agrarian context where people had to labour hard, the Punjabi idea of excessive consumption made perfect sense. But in an urban setting it was pathological: imagine a man who works at his computer all day long and then goes on an eating and drinking binge. Unlatched from its socio-economic context, the idea of Punjab became a modern myth that peddled happiness through consumption.

The healthy and wealthy Punjab could be found only in popular discourse; in reality drugs, disease and debt began ravaging the state. Udta Punjab is a rare mainstream movie that dares to bust the DDLJ myth of a Punjab of strong family values, prosperity and fertility.

Da Gabru, the title of rapper and rock star Tommy Singh, is a dead giveaway of the state of Punjabi youth. The word gabru, literally youth, has a deep cultural resonance that suggests good health, passion as well as chivalry. Its mock-heroic use for a foul-mouthed, petulant and self-obsessed Tommy Singh offers a constant comparison with the traditional ideal of youth and its contemporary debasement. The roguish definite article ‘Da’ before the Punjabi word ‘gabru’ hints at the subversion of traditional ideals more than the embrace of a global style by Punjab’s youth.

The Honey Singh-like character of Tommy Singh channels Western pop themes into Punjab, like the smuggled heroin that comes to be called ‘chitta’. Tommy Singh’s cousin Jassi calls him ‘cool cousin’ from London. There is a class of ‘cool cousins’ in Punjab who, unlike their elder brothers, have returned from abroad mainly due to diminishing employment prospects and economic distress. These ‘cool cousins’ translate the Western themes of drugs, sex and violence for desis. The character of Tommy Singh, with uncanny echoes of the notorious Punjabi rapper Honey Singh, is a brilliant summary of the recent glorification of drugs and misogyny in Punjabi music.

The frequent use of cuss words—which did not wash with the CBFC—render the film unfit for family viewing, but have a deep purpose. They signify a polluted public discourse and inter-personal dialogue amid a breakdown of community and family values. Stereotypes are built around reality but they differ from it for they are exaggerations and generalisations. A Punjabi who cusses is, of course, not a novelty but the menace and malignancy of abuses in the movie sets them apart from cuss words used in playful banter.

The central stereotype of Hindi cinema’s Punjab myth is the noble Sikh. He can be a villain in Western ‘oriental’ movies such as Indiana Jones and Octopussy but never in Hindi cinema. He is the perfect type to help the damsel in distress and shoo away the preying villain. In a cameo appearance, he can turn the tables in a fight loaded against the hero. His lush beard and his turban are indicators of his religious piety, his strong build of his hard work and his straight talk of his honest, transparent nature. Even when he is a buffoon, he is not evil. In Hindi cinema, anyone with a turban on his head and a flowing beard would be a moral force. Udta Punjab does not romanticise Sikhs. Only when shorn of clichéd chivalry do Sikh characters in the movie convey the extent of the crisis in the state. Sikhism was once a bulwark against intoxicants. Tayaji, Tommy Singh’s uncle and manager, wears around his neck a gold Sikh religious symbol without unease. It glitters with realism.

Unlike many other Hindi movies on Punjab, Udta Punjab has no canned nature sounds, grunting buffaloes or sputtering tractors in the background to frame the scene as authentic Punjab. Its background score does not have the usual Bhangra beats. Instead it has realistic sounds such as the musical horn of a truck. Anyone who has travelled on the GT Road in Punjab will be reminded of the annoying impatience of the horn. The narrative seems to draw on real events and places. The Pehalwan’s factory that manufactures synthetic drugs in neighbouring Himachal has an uncanny resemblance to the drug racket busted in 2014 which involved Arjuna-awardee wrestler Jagdish Bhola who is said to be linked to powerful politicians.

Udta Punjab’s story may not be convincing, many plot lines are weak and Alia Bhatt’s role as a migrant labourer could be seen as an appendage. But with its candour and honesty, it busts the myth of a healthy and prosperous Punjab, which advertisers continue to use to sell commodities (such as trucks and desi ghee) and Hindi cinema peddles as romance.