The anonymous lives of Bollywood lookalikes 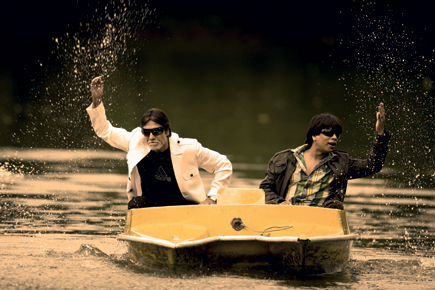 The anonymous lives of Bollywood lookalikes


It’s a sparse living room in a spartan building in Bhayandar, a distant Mumbai suburb. An outdated computer and a clunky old TCL television set occupy pride of place, as if these are the occupant’s most cherished possessions. It is in this room that Shah Rukh Khan has keenly been awaiting my arrival since noon.

The actor greets me with a firm handshake, but there is too much noise, the TV being on full blast, and he suggests we walk down to a quieter lane for a chat. He straps a utility pouch around his waist, and off we go. In no time, we are down on the street. School children on their way back home stare, but don’t ask for autographs or photo ops. They are used to seeing him in the neighbourhood.

Prashant Walde is a professional lookalike of Shah Rukh Khan. His childhood passion, though, was choreography. “I used to lock myself in the bathroom and practise dance for two-three hours at a stretch. When my father [a doctor] finally got wind of what I was up to, he said, ‘There is nothing wrong in dancing. But it would be better if you take up a government job and settle down.’” That advice seemed sound but was wasted “on someone to whom dreams mattered above all else”. Walde won a dance competition, had his picture appear in a local newspaper, and decided to seek a career in choreography.

What he was valued for, though, was his looks. People wanted him to perform at local shows as a Shah Rukh lookalike. “People used to tell me that I look like him.” But such requests didn’t stop, and before long, his ambitions turned from choreography to making the most of the resemblance.

Married by now, and with a child, Walde found himself taking a Rs 4,500-per-month job in Nagpur as a cybercafe operator. “My in-laws said, ‘We like your looks but will you feed our daughter with your face?’” He was miserable in Nagpur. Most of his pay was spent on petrol. Above all, he wasn’t happy at work. Eight months into the job, he asked his wife for one last chance to try making it big in Bollywood.

So in 2007, with his son barely a few months old, he arrived in Mumbai. As luck would have it, he got an audition within a week. Luckily too, there was space in the market for a Shah Rukh lookalike, since another popular lookalike had packed up one fine morning and left for Surat (where he now drives a rickshaw). But he had competition at the audition. “There were many Shah Rukh lookalikes there, and I was like, ‘How will I pass the test?’” Maybe it was the trip he took to a nearby saloon to freshen up. Maybe it was plain dumb luck. Whatever it was, he soon had his first TV commercial. He sent word home to his wife to join him in Mumbai. “I rented a 1 BHK in Mira Road. There were no utensils or bedding, but at least my son wasn’t starving because there was milk at home.”

Without the likeness, Walde feels, he would have been a no-hoper. “If I had told people, ‘I am Prashant Walde’, nobody would have given me a second look. Shah Rukh has come like a god in my life. It is in his name that I earn, feed my family and have managed to buy this house,” he says, of his 670-sq-ft flat that overlooks a hill.

In Hindi cinema, the job of a lookalike is not just to look like the original, but to do—in film parlance—the  ‘undoable’. In Om Shanti Om, there is a fleeting scene in which Shah Rukh’s character is stunned to see his own image in a window. “That was me,” says Walde. “They didn’t want to break that shot, so they had me appear at the window.” For Don 2, Walde did shots of moving hands and hovering shadows. “It saves Shah Rukh’s time.”

Lookalikes who take on such tasks are called ‘body doubles’. While they often operate as stand-ins for technical reasons, they are usually called upon for shots that make stars balk, shots that are too difficult, embarrassing or risky. Recently, Walde was called in for a commercial shoot when Shah Rukh refused to get drenched in paint. “It was a risky shot in the sense they wanted him to lie flat on his stomach with paint spilt all over his body and face. Risky, because his face was involved. That’s when they asked me if I would do it. They assured me they had prepared the mixture with great care and that

it would be easy to remove.” When the sequence was being filmed, the pipe through which Walde was breathing gave in. “But I stuck on,” he says, “Finally, when the production gestured ‘thumbs up’, I was proud to have done my job well.”

Risk is one thing. Getting the mannerisms right, quite another. It takes lookalike artistes years of effort to talk, walk and behave like their originals. Devashish Ghosh, an Aamir Khan double, says he watched Ghulam 15 times to perfect Khan’s tapori style. “Aamir is a difficult actor to copy,” says Ghosh, “He has no fixed style.”

Aamir’s changing appearance and versatility of roles keeps Ghosh huffing and puffing to keep up. “When Ghajini released, I had to change my hairdo. Now, with Talaash, I’ve grown a moustache. With Aamir, you never know what he will do next.” Keeping close tabs on their originals is a must. Walde, for one, follows Shah Rukh’s current look through newspapers and the internet, and has traced every screen shot of his from Baazigar to Ra.One. “Not a single movement of his has missed my eye.” He can mouth Shah Rukh’s popular lines even in his sleep, he boasts, but confesses an inability to match his “English and energy levels”.

Lookalikes also need to be experts at mimicry. “You should be able to produce different sounds and voices,” says Ghosh, “Although I am supposed to be Aamir, people are surprised when I start talking like Akshay Kumar.”

There are tricks of the trade too. Take the case of Arif Khan, an Anil Kapoor lookalike. At first, he found himself faltering over the actor’s baritone. “Once, I met Sudesh Bhonsle [a mimic-singer] on a flight. I asked him, ‘Sir, what is the secret behind Anil Kapoor’s voice? How do you get it right? Each time I try, I end up coughing.’ He laughed and said, ‘Mix Amitabh Bachchan’s voice with Vinod Khanna’s, and you’ll get it.’”

It may be fun basking in the reflected fame of their originals, but the superimposition of their identities does take a toll offscreen. If being sought after as a sort of mask is not ego-squashing enough, one must bear the ridicule of others as well. Says Rajkumar Bakhtiani, an Amitabh Bachchan lookalike, “Ab maine unki utran pehen lee hai (I have worn his identity). This is my life. People will either treat you with respect or mock you. You have to take it in your stride.”

At 57, Bakhtiani, who resembles the grey-whiskered Bachchan of today (the actor has lookalikes of his young self too), is one of the oldest doubles in the industry. He has been doing stage shows since his college days. At first, he was a Shammi Kapoor fan, but in college, he saw Do Anjaane, in which Bachchan had two looks—one clean-shaven and the other bearded. “That was the first time I realised I could do something about my close resemblance to Mr Bachchan.” With his Bachchan dialogues and mimicry skills, he was an instant hit with Ganapati and Navarati revellers in Mumbai.

However, over time, he discovered he had no identity left of his own—not even as the son of his freedom fighter father. He was just a clone. “I have never thought about identity. When I pass by, sometimes I hear people say, ‘Aye, Bol Bachchan. Aye, duplicate.’  Log shaitani karte hain (They tease me)… But you don’t have to bother about what people say. At times, I get angry, but I don’t react because I am a professional. Of course everyone would like to be known by the name their parents have given them. But for people like us, survival is difficult. When we have to think about our kids and expenses, who has the time to brood over identity?”

Yet, resting on someone else’s can sometimes be utterly devoid of dignity. Kishore Bhanushali, who played Junior Dev Anand in Dil, remembers being pushed around when he was down and out, in search of work. “They used to bully me,” he says.

What bothers Arif Khan most is being addressed as a duplicate. “It’s an abuse,” he says, sporting a garish red shirt with a muffler around his neck. We are at a rundown tea stall at Yari Road, with a bunch of unruly boys hooting their recognition of him. He ignores them. “How did this duplicate idea enter people’s minds? Earlier, people used to say ‘Junior Rajesh Khanna’ or ‘Junior Anil Kapoor’. Somebody like Junior Mehmood went on to forge his own identity. Being called ‘junior’ was respectable. It implied the blessings of seniors, the originals. There was certainly a disparity in our social status, but as human beings

Mumbai has only about 25-30 lookalikes, most of them male, working for the film, television and advertising industries. “There aren’t many lookalikes for actresses,” says Seema Motwani, who calls herself ‘Seema Hema Malini’, “Maybe because there is no demand for them. Hema Malini is the only female brand that works.”

Walde offers another perspective: “Sneha Ullal looked like Aishwarya Rai. She got a bigger launch because she was a beautiful lookalike of a beautiful actress. Female lookalikes have better scope.”

That aside, they all complain of getting a raw deal. For a show or TV commercial, they earn in a range of Rs 5,000 to 40,000. In films, their fee depends on the task at hand. It’s rarely much money. “We are not yet in a position to demand money,” says Ghosh, who works as a singer at a Worli hotel to supplement his earnings.

If there’s a highpoint in their careers, it’s when their originals take notice of their skills. Or express appreciation on the sets. Sometimes, a small token of acknowledgement—a gift, perhaps, or a keepsake—can make their day. Or even the thought that they’re special to someone who is special to millions. “Shah Rukh knows me by name… how many people can make that claim?” asks Walde. “If I were to become Prashant Walde again, it would be like dying in oblivion.”