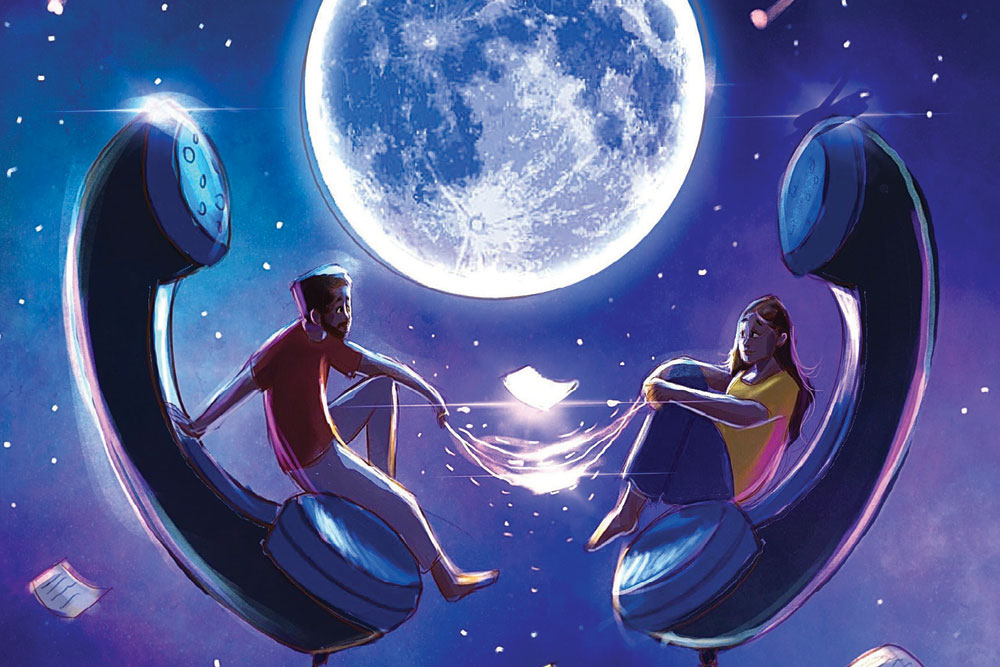 The moon you and I share by Fathima Hakkim


Shafeena Yusuff Ali, a second-generation immigrant, art collector and businesswoman based in Abu Dhabi, has curated an arresting and unusual audio-visual exhibition featuring art by immigrants from different regions of South India. Kaalpadukal which in Malayalam refers to the footprints one leaves behind in the places one inhabits, is a virtual exhibition available for viewing online.

As a motif, footprints have long represented humanity’s obsession with transience, mortality and legacy. Migrants, separated from their home communities and alienated to various degrees in their adopted homes, have an especially precarious relationship with the ledgers of time. For the exhibition, 17 artists were asked to create original work in conversation with the theme of migration.

Ali searched for up-and-coming digital artists from South India and from the South Indian diaspora whose lives had been touched by migration. She discovered some through Instagram and others through recommendations. She explains, “There was no set methodology to pick the artists. It was just gut instinct. How is their work? If they do make work for the exhibition, will it go in the flow?” After hearing Ali’s vision for the exhibition, the artists chose incidents and ideas from their own life that would reflect their lived experiences as migrants and children of migrants. Ali recognised that the emotional life of a migrant would be a rich mine for these artists to pull from. “Being a migrant myself, being the daughter, the granddaughter of a migrant, I know [the identity] is a plethora of emotions,” says Ali, adding, “There are the emotions of when you leave your house to when you reach where you are to what you face there to finding your identity to the emotion of going back and seeing your family.”


Kaalpadukal: Songs of the Diaspora opens with haunting images by Sarah Kaushik and a voiceover suggesting that we can only ever have one home. Kaushik has used the superimposition possible through collage to highlight the surreal, often cruelly juxtaposed existence of internal migrants in India. The layering of renderings of iconic monuments, overbright florals and an interstellar display with monochrome images of migrants that range from hopeful to weary is a searing statement on who is allowed to assimilate in a city like Delhi, which may appear receptive to many but can be hostile to those without means or community.

The exhibition moves on to show us work that is diverse in tone and vision reflecting various interpretations of the migrant story. The images on offer vary from a poignant airport scene to a torn packaging collage to more abstract scenes in laboratories and within wombs that suggest gestation and formative forces. There is a definite belief espoused in these images—there is no escaping where you or your family were born and moulded. One of the best-developed images in the exhibition is by Devika Menon who has woven translucent layers of maps and shadow selves in shades of purple, blue and mustard to depict the complex reality of being a Third-Culture Kid. The colour palettes in the exhibition differ so jarringly from each other that one never forgets that the immigrant experience is no monolith.

Designed to be an immersive experience, the exhibition truly is a room one walks into with its own contours, shifting visuals and acoustics. Ali says, “There is a multitude of elements in the exhibition. I am forcing you to listen to a poem, I am forcing you to pay attention, to stop and look at the work, to listen to what a migrant may be trying to tell you.” The accompanying poem, written by Lakshmy Das and narrated in soothing tones by Prakash Narendran Devi, lends cohesion to the different artworks as it walks us through stories suggested by the visuals. The line “homeward is the only journey we now hope to make” runs in time with Akhil VK’s drawing of a man whose thoughts are of a verdant lake, presumably from his place of origin. Without narration, the exhibition likely wouldn’t carry the same force.

The decision to exclusively feature digital art was influenced in part by the pandemic. Though new to many, this reality is familiar to immigrants who are accustomed to communicating with their families online.

Ali sees digital art as a natural extension of increasingly digitised communication. According to her, digital art’s potential has yet to be plumbed, particularly in the Indian context. She suspects that audiences and critics do not currently see it as a legitimate medium that can stand on its own. This motivates her to explore its strengths and provide attention and patronage to its practitioners.

Though this is her first curatorial experience, she is no stranger to bridging the gap between art and commerce, and between art and consumer. Describing herself as an experience curator, she has helped design the hotels her company, Twenty14 Holdings, owns. Before handing the properties over to operators to run, she ensures their aesthetic is in harmony with the local ethos.

This part of her work introduced her to the world of art. She says, “In a country like India when we’re looking for art, [one finds] this incredible world of artists with so much talent who have no clue how to market themselves, how to make a living off their work, how to have commercial spaces to display their work.” The company’s hotels are meant to be a place where art is granted space and where it contributes significantly to the visitor’s experience.

Ali recently completed a Master’s in Art History, which she pursued after realising she didn’t have enough academic information about the projects she was undertaking. The course was her attempt at understanding art history and visual culture in the Indian and Middle Eastern context, which would help her absorb where the artists she was working with were coming from and how their identity may tie into their work. She focused on South Indian contemporary art for her thesis, deliberately choosing a more general approach to study an under-explored subject to gauge what themes South Indian artists are passionate about today and which mediums they favour.

What surprised Ali were the marked differences between the work some of the artists turned in and their customary style. Having built up a relationship over multiple conversations, she asked them why they chose to deviate from what they normally would have done. “They said they felt that the emotion of migration demanded it. While their work might usually be humorous, their piece was actually quite serious. They said, when I think about migration, for me, humour is not an aspect that I want to portray in my work,” she says.

As a curator, she was happy to leave those calls to the discretion of the artist. Her job was to look at the artwork and see what story she could tell through those images. With most of the artists, the brief took up a single conversation and the following conversations only served to deepen Ali’s understanding of what the artist meant to convey in their work so she could write about it and guide the creator.

By the time the exhibition had been pulled together, Ali found that it had become her work of art as well. She says, “If you hear the background of the poem itself, you’ll see it has cultural references from poetic recitations in Kerala particularly where they have a single-tone mridangam playing usually when they recite. Those ideas are taken into the fold when I curated the exhibition.”

A visual that crops up a few times in the exhibition, in the work of different artists, is that of construction. Ali says, “Being a migrant is not for the faint-hearted. It is an emotional rollercoaster where you go through building inside yourself. Which I think is what the construction is talking about.” In Younus Backer’s work, “You, the audience, are one of the people holding onto the construction building which is in a box. That’s what the ex-pat life is about. It’s about holding on and building a life in your mind, how piece by piece you build that.”

An artist who reaches into the core of this metaphor is Ashwin Jacob Samuel whose work stands out for its evocative, yet clear-eyed approach. His trio of artworks brings to light startling statistics about migrants including the fact that 90 percent of Dubai’s residents are migrants of which a large portion are workers brought in to work on the construction of some of the city’s most famous structures. It’s a call back to the opening images of Kaalpadukal, which show how little the labour of workers on public spaces benefits them.

For this freshness of perspective, Ali remains focused on supporting artists creating today. She cites a lack of public awareness about the relevance of art to our everyday lives and cultural identity for the bias towards artists of old. “I mean, why should I buy it and display it in the house? What is its significance and relevance to me? Awareness of that is what is important,” she emphasises. She thinks events like the Kochi-Muziris Biennale are changing perceptions, but she believes more is needed—“More patronage needs to be given to these artists. More attention and more workshops to improve their skills and ideas so they improve and become [the artists] they should be.”

(Kaalpadukal: Songs of the Diaspora is an ongoing online exhibition. It can be viewed at kaalpadukal.com)