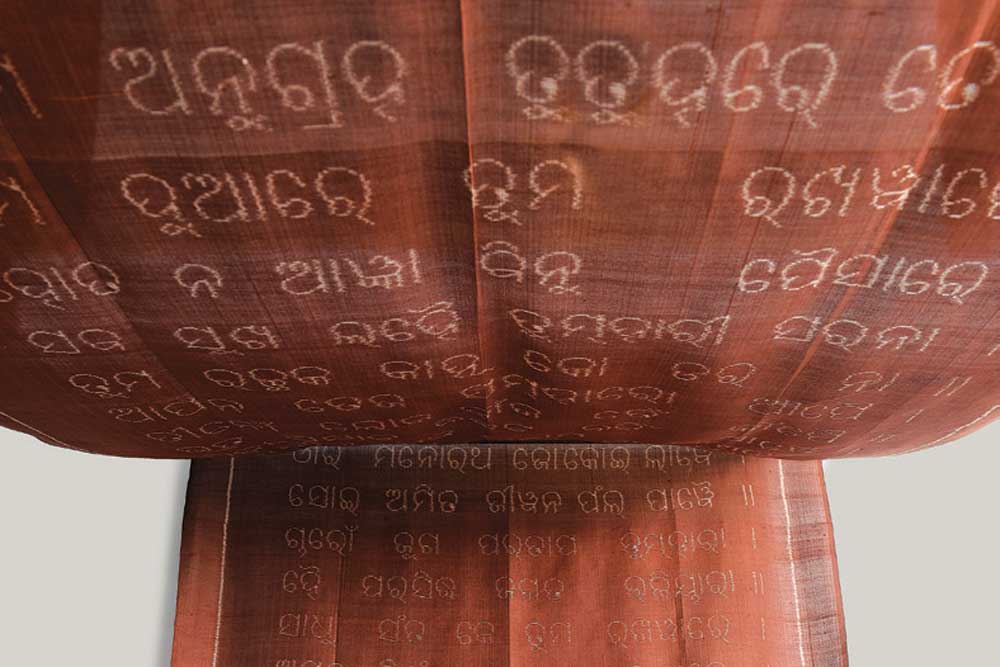 TO AN UNOBSERVANT onlooker, the act of weaving may seem mechanical: the rhythmic swooshing, clacking and swishing of the wooden loom, the cadence of the shuttle against the gossamer threads, the whirring of the spindle, and the perfunctory movement of a silent weaver (sometimes with a quiet helper at his side) with a stylus in a dusty workshop. To a textile connoisseur, however, this mundane sight metamorphoses into hymns, ancient chants and folk tales, echoes of wars, invasions and migrations, and tells of a community’s art, religion and music. The theatre of life itself is woven into a fabric. Kabir, one of the greatest mystic weaver-poets, compared weaving to the sacred act of creation. He wrote,

‘I have run mere cotton threads for the warp and weft.

But how did God, the Master Weaver, make this finely woven fabric we call skin that we wear all our lives?

What is the warp?

What is the weft?

What fine thread does he use?’

Weaving is a laborious task. A textile is created by weaving together two thread systems: the warp (runs parallel to the side of the loom and is kept stretched during weaving) and the weft (lies at right angles to the warp and runs alternately over and under the warp threads). In ikat textiles, both warp and weft are bound and resist dyed first to create a predetermined design. Once ready, the weft threads are woven onto the loom, and they combine with the warp to reveal a pattern. Each step in the design represents one cluster of threads which are bound before dyeing. After the threads have been combined on the loom to create the cloth, the master weaver uses a metal stylus to correct any error in the warp and weft; he then tightens the weave on the loom.

A master weaver, often a woman, inherits a reservoir of knowledge from her ancestors apart from the reverberation of age-old myths. Mind deep in meditation, head bent, shoulders hunched, eyes strained due to long hours under insufficient light, her nimble fingers work incessantly on thousands of strands in order to realise a motif. With only a stylus at her command, she gives birth to the sacred cloth made of vibrant threads which blend in some places and stay distinct in others.

The exhibition, ‘World Ikat Textiles… Ties that Bind’, at Bikaner House in Delhi celebrates this beauty of the ikat heritage. Curated by Manjari Nirula and Edric Ong, it was first unveiled at the Brunei Gallery in London earlier this year. This initiative of the World Craft Council, World Craft Council-Asia Pacific Region, Delhi Craft Council, celebrates 120 vintage, antique and contemporary ikat pieces from more than 20 countries of the Asia-Pacific region.

Each Ikat weave is as exquisite as the next, with a story to tell of its past, its travels and its makers

In the central lobby of the historic Bikaner House, the visitor is greeted by an opulent collection of adras and bakhmal weaves from Central Asia. The production of Central Asian ikat was defined by geography. Uzbeks, Tadjiks, Iranians and Jews brought in multiple skills and motifs. Unlike in most parts of the world where ikat weaving was mostly done by women, in Central Asia ikat weaving is the work of men. The vibrant adras fabric is woven on a simple warp-weighted loom while the prized silk velvet ikat bakhmal is much more complex and involves five harnesses.

Flanked on either side of the Central Asian displays are sublime interpretations of Indian ikat traditions by Abraham & Thakore, Neeru Kumar and Gunjan Jain. The lobby opens into two passageways, full of ikat textiles from Cambodia, Thailand, India, Indonesia, Uzbekistan, the Philippines and Malaysia: each as exquisite as the next, with a story to tell of its past, its travels and its makers. The Churning of the Sea, a ‘pidan’ at the entrance of one of the passageways, speaks of the shared religious beliefs of India and Cambodia. Known as ‘ship cloth’ by some scholars, pidan textiles are pictorial ikat hangings woven for temples.

Next, one encounters the exquisite Limar Songket of Indonesia and Malaysia. Limar (brocade on ikat) is a complex technique in which brocade weaving is introduced along with intricate tie-and-dye weaving on the loom. The passageway opens into a lobby displaying a beautiful Chitto sari and a vintage Gita Govinda sari in calligraphic weft ikat from Nuapatna, Odisha. Often woven in silk, containing verses praising the gods in Devanagri or Odiya script, this tie-dyed ikat fabric called ‘pheta’ is offered as a robe for deities in the temples of Puri.

The main gallery opens into a mesmerising display of contemporary and vintage patolas from Patan, Gujarat. The piece de resistance is the Shrikhar Bhat, a fine double ikat wall hanging, woven by master weaver and National awardee Rohit Salvi from Patan. These double ikat patolas, symbolising wealth, are often worn as saris or odhnis, and are considered sacred not only in India but also in South East Asia. The Malayan Annals of the 7th century mention cindai patola as a protective cloth worn by warriors. Exchanged often as trade-cloth, this double ikat patola is used by different communities across South East Asia. The double ikat Geringsing of Tenganan (Bali) is considered a sacred object which wards off evil, as is the pua or the power cloth of the Iban (Malaysia) on display at the exhibition. The Pua Kumbu weaves are known as the woven dreams of Iban women weavers.

Textile expert Rosemary Crill believes that Telangana is the original home of ikat in India, and not Gujarat. The ikat tradition here split over time into Telia Rumal and Pochampalli ikats. While Telia Rumal textiles are decorated with red, black, white chequered patterns, animals or everyday objects, the Pochampalli weaves have Western and Japanese motifs.

The international section includes weaves from Guatemala to Iran, Nepal to France. Ikat is known by many names in the South East Asian countries. In Indonesia and Malaysia, the term ikat, derived from the verb mengikat, means ‘to bind, tie or wind around’. In Thailand, ikat is called ‘mudmee’. It is known as ‘kasuri’ in Japan and is woven in various regions in warp, weft, double ikat ‘kasuri’ patterns and their combinations. In Guatemala, it is known as ‘jaspe’. In Mexico, ikat shawls with long decorative ‘punta’ fringes on both ends are called ‘rebozo’. In Peru, ikat weaves that use wool are predominant. The Mapuche of Chile still produce indigo-dyed warp ikat textiles.

Passages in the ancient text Periplus of the Erythrean Sea reveal that textile exports from India to the Middle East date as early as the 1st century CE. Literary sources testify to the use of ikat (using the Arabic term ‘asd’ or ‘binding’) as early as the late 6th and 7th century. From Yemen, ikat cloth was sent to other parts of the Islamic world through Iran, Syria and Ottoman Turkey and then to Italy, Majorca, Greece, Switzerland and France under the name chiné. So it is befitting to bring the exhibition back to one of the founts of this tradition.

The exhibition is scheduled to travel to Kuching, Malaysia later this year and then to Thailand in August 2018.