The Masaan Girl’s Day Out 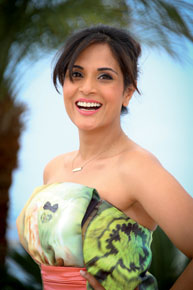 There is a scene in Masaan, one of the indie favourites of the year, where the character of Richa Chadda tells her father played by Sanjay Mishra that she wants to leave home and go elsewhere to pursue her career. Her father breaks down and discourages her from leaving town, and she has to pacify him in a way that he understands why she must make this journey. However, for Richa Chadda, the actress, the move from Delhi to tinseltown has been far from dramatic. She brings this up to laugh over the contrast. “My parents were full of support and encouragement and they really wanted me to go and pursue my dream in Mumbai,” she says. “I don’t have any struggler stories. I did not come with twenty rupees in my pocket, nor did I spend nights at Andheri station. If someone is looking at me for such stories, I think they should move on to the next person,” she says.

We meet at a diner in Versova, where Chadda arrives in a casual black dress. She has just finished a work meeting in the area with a production house and has walked to the café. While settling in, she excitedly narrates how she was spotted while walking on the road by some young men who said, “Yeh wohi hain na, Wasseypur waali (This is the same one, the one in Wasseypur.” And as she walked further ahead, a few others pointed out and said, “Yeh toh Masaan waali hai (She’s the one in Masaan).” She flashes a broad smile. “I am glad I am being recognised for the movies I do. That was always the plan.”

Chadda is an example of the changes that cinema stardom can bring. After the success of several of her films, starting from Gangs of Wasseypur and Fukrey to Goliyon Ki Rasleela Ram-Leela (in the last two, she had small but noticeable roles), and then Masaan, the actress’ confidence has only risen. It is evident in her stature, her poise as she walks and even the manner of her speech. But her general demeanour is as down to earth as ever. She has also lost oodles of weight, which she credits to the gruelling hours of workout and dance she is putting in for her upcoming film, Pooja Bhatt’s Cabaret.

She has several work meetings to attend after this interview, and her phone keeps ringing as she schedules one after the other, even as she issues instructions in between to her driver to get her car repaired and tyres replaced.

Chadda lives alone in Mumbai, and like most out-of-towners, she goes about her daily household chores all by herself. She also makes it a point to take full responsibility for every decision. It was no different when Masaan was offered to her by director Neeraj Ghaywan. She says that the decision to take it up was purely instinctive and based on the positive feeling she got after Ghaywan narrated the entire script to her. That the film went on to win two coveted awards at the Cannes Film Festival, she says, was validation of her faith in the director’s vision. “When Neeraj came to me with the concept, he didn’t have any backing for the film,” says Chadda, “But at no point was I apprehensive about taking this on. When I read the script, I knew straightaway that this is one film I shouldn’t miss out on. When we managed to find financial backing for the film later on, I was so proud of my decision.”

Chadda has played many pivotal roles that have stood out in contemporary Indian cinema. With Masaan, she has only taken her success to a new plane. In the film, she plays a traumatised small-town girl who is persecuted by people around her and finds herself led to a moral dilemma. The morality crisis is the theme around which her character is based. “And the Indianness of the film and the rural-urban divide in terms of emotional as well as intelligence quotient is what was appreciated at festivals,” she says. “I am happy that our films are leaving an impression globally. And India too is looking beyond just commercial entertainers, while giving importance to good content.”

There are two things that Chadda feels Bollywood could do without: the distinction made between lead actors and supporting actors, and the frequency with which actresses are made to play second fiddle to actors. “I don’t understand this distinction. Hollywood doesn’t have these at all, everyone is an actor there and an actor with maybe just ten minutes of a good performance could win a best actor award,” she says. Similarly, she wants the media not to tag films as ‘women- centric’ or otherwise. “The films I do, do not have me playing a flower pot, but it doesn’t necessarily revolve around me. A film is a film—you don’t have to treat it according to gender,” she says.

Chadda’s views on these matters are an outcome of her upbringing, she says. She was always taught to stand up for herself. While her parents were not opposed to her moving to Mumbai in principle, they were keen that she complete her education. She convinced them, however, that she was doing what was best for her. In Mumbai, she joined Sophia College, and after her graduation, she joined Barry John’s theatre group. “I worked as a lead actor in one of his plays. I was cast by Dibakar Banerjee in Oye Lucky! Lucky Oye! soon after,” says the 25-year-old. Her debut role as a typical Delhi girl in 2008, one that was quite a breeze to execute, won her much appreciation at a time when multiplex movies were still quite a new phenomemon.

Unlike many of her contemporaries, she had no reference point when she began her career in cinema. “In a way, this was good,” says the actress. “I could do what I wanted to do, and not what someone else wanted me to do.” As a keen learner of her craft, acting was something that came naturally to her. She was passionate about it, and it was this passion that helped her keep her hopes alive even on days she felt nothing was working for her. Naïve as she was when she came in, she says, she thought Bollywood would be a democratic place. “I really believed that anyone who is good at their craft would get work. But sadly, this place isn’t democratic at all.” No sooner did she learn this, the harder she began to work towards her goal.

Soon, things did start falling into place for her. “I thought getting work was easy because most things came to me on a platter. However, the period after Oye Lucky! Lucky Oye! changed my perception of the industry. Either people came to me with the same kind of roles, or I was offered no work,” she says. She resisted these offers and eventually bagged a meaty role in Gangs of Wasseypur, which released four years after she made her debut. “When I auditioned for DevD, Anurag [Kashyap] had liked my audition. He had told me that he would work with me in the future. I was, however, not very hopeful. When he did approach me for the role, I was thrilled,” she adds.

Today, she feels, Gangs of Wasseypur has had a major role to play in the way her career has shaped up. She has filmmakers coming to her with substantial roles, like her next, Main Aur Charles, where she plays the wife of the suave international gangster Charles Sobhraj. In Jiah Aur Jiah she plays the character of a girl forced to come of age quickly because of certain circumstances in life. With Cabaret and Aur Devdas, she is making sure she is taking up films which border on entertainment while being socially relevant. It also helps that she has made peace with the industry and is now looking forward to make use of every opportunity that comes her way. That she’s so far had only positive reviews coming her way has gone a long way in helping her scoop up these prestigious roles. “At times, it is a bit scary, because I have no idea how I will react to negative reviews,” she says with a laugh. “I just hope I don’t have to ever react to them.”

She has made a mark for herself in a famously difficult industry, but what excites her more is how she has made this city her home. “Mumbai may be unknown to you, but the beauty of this city is that it just accepts you. The city is so vivacious that it makes you believe in your dreams even more. It makes you want to tell others to never give up on their dreams and to come here and fulfil them.” She misses Delhi, she admits, and whenever she gets a break from work she makes sure to spend it with her parents. “It keeps me rooted. I like going back home and being with my set of people. They also give me the confidence and courage to work hard.”