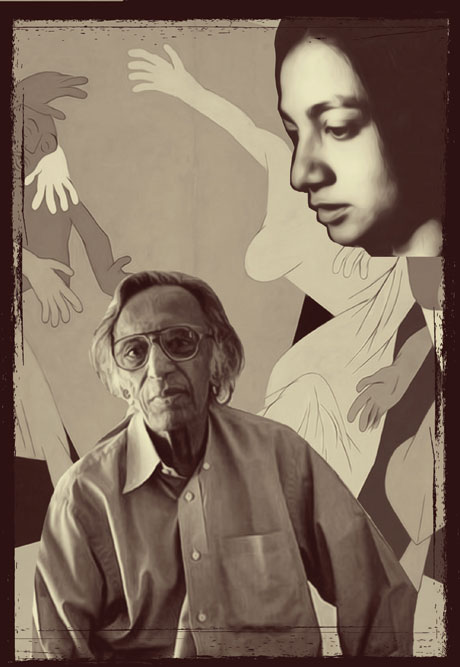 
IN THE HEART of isolation is an island. A barely inhabited place, perhaps sandy or forested, floating upon endless water. To be isolated, means to have become insular, to have been made into an island. But the map of that island—the bends of its shores, the topography of its mountains—are rarely the same for each person. Each isolation is an inimitable landscape.

My first lessons in islanding—isolation, if you must—came from my mother, a painter. Wanting to escape the incessant jabbering of her eight-year-old, she would send me away to a corner of her studio with a stack of books. The books were not children’s stories, but glossy-paged art collections and old gallery catalogues she had gathered over the years. As my mother sequestered herself away with her canvas, I turned pages, time-travelling between Cubism and Gond art, and even back to the Renaissance.

It would be a lie to say that I looked forward to this unguided art history lesson. Mostly, I begrudged my mother for not paying me attention. But I did, invariably, spend hours gazing at those books, learning to identify the works of certain painters and picking out my favourites. I imagined stories for the images I saw, and made with their shapes and colours an island of my own. The birds in Paul Klee’s Twittering Machine were my sworn enemies, while K G Subramanyan’s monkeys were my friends.

If the island-hours of my childhood could be found on an atlas, then two coordinates would certainly be the Indian modernists, Nasreen Mohamedi and Tyeb Mehta. My mother owned catalogues of their retrospectives and, over time, I came to love their work.

Mohamedi and Mehta—friends in their lifetimes—both had deeply solitary artistic practices. But I didn’t know of those biographical details when I first encountered their works as a child; back then it was uninscribed images—pure form, devoid of history—that had dazzled me. Looking at those same images now, I realise that they are perhaps more than the abstract companions my mother had thrust upon me, that they are themselves meditations on being alone.

Tyeb Mehta was a self-confessed recluse. He avoided public engagements, choosing instead to spend his days in his studio—it was the place he said he was happiest. Other than his wife and a handful of friends, few had access to him while he worked. For a man so pulled away from the outside world, however, Mehta was not all that prolific, at least not in terms of what remains for the world to see. He is known to have destroyed several works because he was either dissatisfied with them, or had outgrown the concerns they embodied. He also took a long time to translate his thoughts onto canvas. He lived with a painting inside him, before rendering it in paint. It is almost as if the paintings that survive were, somehow, to him, essential.


When I look at Tyeb Mehta’s celebration now, I see a lament about humankind at its basest and most individualistic. The figures are consumed in themselves

The sparseness of Mehta’s body of work echoes the sparseness of his imagery—stark, broad colours separated by restrained contours. In his early works, Mehta painted solemn portraits. These were heavily pigmented figures—far from beautiful and inconsolably lonely. The melancholia of these early works would carry through into his later works of his signature, flat-colour style. Many have attributed the sadness in Mehta’s paintings to his own reclusive nature, and to the deep effect Partition had on him. He recalled of 1947:

“I remember watching a young man being slaughtered in the street beneath my window. The crowd beat him to death, smashed his head with stones. I was sick with fever for days afterwards and the image still haunts me.”

But to say that Mehta’s sad figures are reflections of some troubled existence is too easy an equivalence. The loneliness in his paintings seems telling also of a philosophical idea that tints his later and most famous works—the idea that man is always responsible for a suffering larger than his own.

In 2002, Mehta made history when his 1995 triptych Celebration sold for 300,000 dollars at a Christie’s auction—at the time, this was the highest price a painting by an Indian artist had sold for. The canvases of Celebration are divided in sharp angles of solid colour. Within these fractures, supposedly jubilant bodies are not united, but dismembered into each other. A breast grows into an arm, a chin into another head. The faces of these figures are almost expressionless but for their open, misshapen mouths. It is a scene both bacchanalian and brutal, where each body is dancing, not in harmony, but to its own tune. In one corner, a lamb bleats. Itself a sacrifice, it bears witness to the inhumanity within the human herd.

I had grown up looking at photos of Celebration in a catalogue my mother owned. But when I look at the work now, I see in that crowd a vision darker than its bright colours.

It is not a ‘celebration’, but a lament about humankind at its basest and most individualistic. Even as they dance in a group, the figures are too consumed in themselves to acknowledge each other.

The American poet CA Conrad writes in their poem, ‘Camisado’: ‘everything matters because everything/ hurts someone somewhere as it is mattering.’ I remembered these lines as I revisited Celebration, noticing how each self-absorbed body morphs into the other, how a pained face in the right-hand side canvas reflects the pain of the one on the left. Even though each being in the painting is not aware of it, they are affecting the other in violent ways. Individual joy is a fallacy. Here, if celebration is communal, so is suffering.

John Donne famously proclaimed, “No man is an island” and Mehta attests to that claim graphically. It is perhaps a lesson he understood through his own isolation. Mehta said, “To the painter the image that he chooses, amongst many others available to him, depends on the kind of person he is and how he can come to terms with it.” Being the cloistered person he was, he seems to have found in his self-imposed distance a vantage point, a view above the heads of the crowd, from where he was able to evoke the cruelty of power that invariably ties people together. Upon his own island, he didn’t look inward to find solitude. Instead, he seems to have gazed far out towards the horizon, charting each detail of the tumultuous waters around him.

Isolation in Nasreen Mohamedi’s work offers the possibility of blurring one’s eyes and looking at the world in its simplest terms. Size. Shape. Shadow. Weight.

If Mehta’s works speak of the ontological impossibility of isolation, then Nasreen Mohamedi’s works reveal that the human being, in its isolation, is sufficient. The carefully distanced lines of her black-and-white drawings create precise and striking landscapes. The lines thicken imperceptibly, and fade from their darkest points without telling. Each work is a continuum, without beginning or end. Nothing lacks. And nothing seems in excess.

Mohamedi, it is widely known, lived with the minimalism her drawings exude. Her apartment had little furniture—only the bare essentials of a bed, a pair of chairs, a cupboard, and a low working table rigged with an architect’s measures. While she lived and worked in this pristine environment, however, she was not averse to company. A teacher at the Fine Arts Faculty at Baroda, she interacted with people often. Her practice, however, is said to have been solitary, almost meditative.

Mohamedi’s life was a short one. At 53, she died of Huntington’s Disease, which manifested itself in physical twitches she couldn’t control. Some have suggested that her highly controlled drawing practice was a kind of spiritual antidote to her decaying body. Others have equated the bareness of her work with a kind of sombre worldview, born of a broken engagement and chronic disease. Refraining from the trite narrative of the world-weary, ascetic artist, I see in her works instead a cognitive exercise that reaches beyond the emotional.

To seek the saccharine in Mohamedi’s work seems a misplaced endeavour because it was clarity that she was drawn to. She often took photographs of the play of light and shade over concrete, and would later reinterpret those same relationships in further-stripped images of ink, graphite, and white space.

Perhaps the unassuming curiosity with which my younger self had approached her work is an appropriate lens even now. The poet Frank Bidart writes in the poem Borges and I, ‘Everything in art is a formal question, so he tried to do it in prose with much blank white space.’ Looking at the skeleton of light and dark, blade and curve in Mohamedi’s works, we might find for ourselves a personal drama—as profuse as prose, as naked as line and blank space.

Suspended in the centre of a blank sheet are three triangles—islands hovering over each other. Each one grows out and fades away from the other without betraying their calculated arrangement. Around them, endless, endless white. Despite their differing shades, the islands are, ultimately, one being, casting a collective shadow beneath them. When we imagine an island, we assume a place between serenity and despair. But for Mohamedi, the physical manifestation of that island is something more matter-of-fact—it is nothing but its own form. A body in space—nothing more and more than enough.

Isolation in Mohamedi’s work takes on a dimension different from Mehta’s. It isn’t a window into the outside world and its horrors. Instead, it offers the possibility of blurring one’s eyes and looking at the world in its simplest terms. Size. Shape. Shadow. Weight. The certitudes each of us hold.

In her diary, Mohamedi wrote:

She wrote those lines about the desert in Rajasthan. The desert fascinated her , almost as if it were a microcosm of all existence. In many works, lines blow over each other, deceiving as the dunes. Mohamedi’s works, when I look at them carefully, do not speak of aloneness so much as an island, but more as an infinite tract of desert. It is a sandy landscape that leads nowhere and so, Mohamedi leads it back into the person observing it. In the starry nights of deserts, it is not distance that we find, but purpose. Mohamedi wrote:

‘If it is astronomy, the phases of the sphere and its influence upon the earth, whether it is light or heavy portending, tranquility or danger, all these things are connected with your situation and serve your ends…If the star is lucky or unlucky, it is connected with your own ascendent…When you consider the matter well, the root of the whole business is yourself.’

Maybe then, Mohamedi’s drawings suggest that we are fated to be isolate. That no matter how big and abundant the world might seem, it is no more than our own breath and bone. It is but one sun that makes both shadow and light.