The Lightness of Dissent 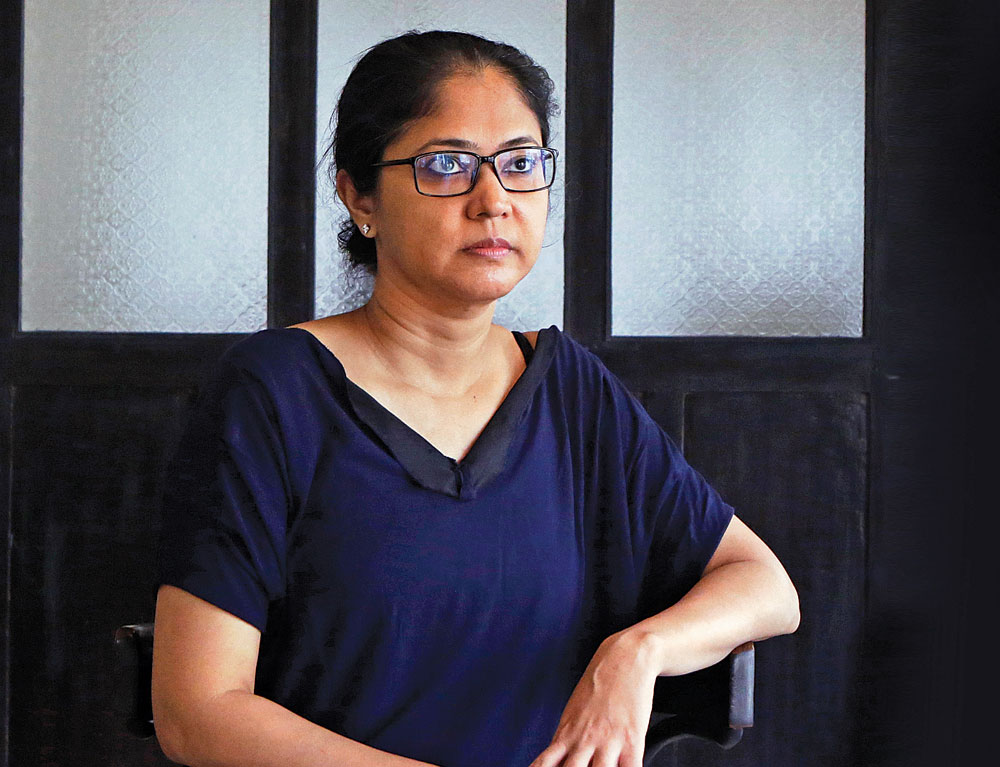 
Exhibited in Edinburgh, Kochi, Antwerp, Dallas, at the Venice Biennale and most recently at the Barbican Centre in London, artist Shilpa Gupta’s For, In Your Tongue, I Cannot Fit (2017-18) is a model of sublime subversion. An ode to 100 poets across his­tory who have spoken truth to power, the 70-minute sound installation hands the mike back to where it belongs—persecuted poets and thinkers. Many of them had to pay the price of dissent with their lives, including the 14th-century Azerbaijani poet Imadaddin Nasimi whose line, “Both worlds can fit within me/ But in this world, I cannot fit” gives Gupta’s work its tongue-in-cheek title. “Poets are a society’s voice. What if their voice, no matter how critical, is silenced? We would end up living in a world of lies, compromises and little imagination. For me, this work has been an act of listening, particularly at a time when free speech is under attack and truth has become malleable in the hands of those in power,” says Gupta, who is both soft-spoken and outspoken during our interaction at her studio in Mumbai.

An extended book version of For, In Your Tongue, I Cannot Fit is now in the works. Edited in collabora­tion with writer Salil Tripathi, the volume contains 58 revolutionary poems by poets such as Angel Cuadra, Faiz Ahmed Faiz, Nguyen Chí Thien, Kazi Nazrul Islam, Majrooh Sultanpuri, Abdellatif Laabi and of course, Imadaddin Nasimi. The text is inter­spersed with Gupta’s simple yet powerful drawings, which depict the plight of the poets — the Palestin­ian poet-activist Dareen Tatour under house arrest, the Pakistani anti-establishment poet Habib Jalib manhandled by the police, the dissident South Korean writer Kim Chi-ha being hugged by his wife, and the cops clamping down on demonstrators supporting the 81-year-old Telugu poet Varavara Rao. “The intention with this project was to share the re­search we have gathered over several years and see if it was possible to assemble different voices that have stood alongside those who have risked themselves, sometimes even unknowingly, while showing a mir­ror to their communities,” she says.

For Gupta, freedom of speech is not just a motif but also a statement of faith. The horrors of censor­ship and extremism have long worried her, ever since she first read George Orwell and Munshi Premchand (her mother’s favourite author). The latter was even accused of sedition. She explains, “Ten years ago, if you had asked someone on the street, ‘What’s sedition?’ No one would have known. Today, it’s a common word, being wielded against those who speak differently.”

Reviewing her recently concluded show Sun at Night in London where For, In Your Tongue, I Cannot

Fit was received with much acclaim, The Guardian described her art as “quietly heroic”. Some of that heroism is fuelled in part by her persistent interrogation of her own personal identity. “Nobody takes you for who you are. Isn’t that true, especially in South Asia?” she asks. “When I started out my work was different and couldn’t fit into any precon­ceived structure. I was instantly boxed into categories. Someone called me a ‘conceptual artist,’ someone else said, ‘new media/instal­lation artist’ or ‘woman artist’. Society always has this need to classify which becomes very limiting.” These thoughts about self­hood, freedom, gender and the relationship between language and knowledge grew into a project called Someone Else (2011). Cast out of stainless steel, the installation featured 100 authors who have written under pseudo­nyms because of the risks involved in using their real names. For example, Emily Brontë adopted the very “Christian and masculine” pen name Ellis Bell to deflate gender bias.


Someone Else is one in a long list of Gupta’s works over the last two decades that have acquired unprecedented relevance in a world caught in an endless cycle of conflict and violence. It is hard to imagine another Indian artist who has pursued such an idiosyncratic approach to art. Relying on a variety of media that includes performance-based experiences, installation, LED lights, sound clips and video projections, her audience-friendly and often immersive art is built like thought paradoxes and puzzles, recalling the avant-garde ethos of Marcel Duchamp, Yves Klein, Damien Hirst and Yoko Ono. Take Speaking Wall (2009-10), for example. This instructive installation motivated participants to stand on a narrow line of brick steps facing a wall while an LCD screen lobbed a set of commands. So irreverent was the concept that you could have almost missed its veiled critique — the impermanence and futility of constructed borders. The idea was born out of a casual remark by the Pakistani film­maker Farzad Nabi during her road trip from Lahore to Wagah. “What stayed with me was when he said that his grandmother still had the key to her house in Kashmir,” says Gupta, who has done extensive work in both Kashmir and Bangladesh, giving rise to a number of works based on national borders. She first visited Bangladesh in 2013 and was surprised to see marijuana growing near the border checkpoints. Back in her studio, she made drawings out of marijuana ink. Combining photographs, interviews and historical records, she went on to explore the idea of no man’s land. Visiting chitmahals, or enclaves on both sides of the border she realised the extent to which this lingering dispute from the days of the Independ­ence has impacted the lives of those stranded when the map was redrawn. One of her performance-based installations saw her use handwoven fabric to underline the political reality of the Indo-Bangladesh border, which at 4096 km remains one of the largest fenced boundaries of its kind in the world. Another time, she invited 100 people to draw their version of the Indian map, which was then traced and layered on top of each other using carbon paper. Besides site-specific installations, the artist also engages with outdoor neon-based light projects. These often include enigmatic aphorisms that make you pause and ponder. One installed near the Bandra seafront, written in a mix of English, Urdu and Hindi, read, “I live under your sky too,” while another reminded viewers, “We change each other.”

“I am interested in the relationship between text and image and how the act of reading can either inform or con­strain,” says the 46-year-old, adding, “What these works have in common is that they are about persistence of beliefs, of dreams, of mobility, which make us what we are as individu­als. When systems attempt to map, graph and tabulate to seek control, people masquerade, infiltrate and catapult.” Despite her constant engagement with politics, Gupta insists that she’s not comfortable with that word. “The moment you say ‘political’ it moves away from everyday life,” she argues. “I would say that we are a part of the system that makes us feel like passive participants. However, in life, all choices we make and navigate through are governed by systems of thinking and being. You know about the Milgram experiment where you are made to do things that run counter to your belief systems? I find that to be a useful reference today, as human beings seem to have become automated, giving up their own sense of logic.” Threat (2008-09) addressed this very theme as it tried to reconnect humans with each other, reminding them of their shared attributes rather than differences. The installation was also a response to the growing Islamophobia in the post-9/11 era. Playful and yet serious in its intent, Gupta placed bars of skin-colour soap with ‘threat’ printed on it. She encouraged viewers to take one bar with them as they walked out of the gallery. So, one by one, with efforts from each of us, the threat simply vanished.

Poets are a society’s voice. What if their voice, no matter how critical, is silenced? We would end up living in a world of lies, compromises and little imagination. For me, this work has been an act of listening, says Shilpa Gupta, artist

Gupta’s art is neither provocative nor elitist, as she often involves the viewers to unpack her brainteasers. She likes to treat the audience as fellow travellers and co-conspirators more than just as casual observers. “As an artist, I am not above anyone else. For me, it’s about creating a worldview and then sharing something that I have felt with others. It’s like a proposition. The viewer and I are walking alongside and maybe he/she can see what I have seen. We both can learn from each other’s journey.” With her experiments, she says she wants to reduce the distance between her art and the spectator. “When I first went to Kashmir I was greeted with ‘Bambai se aaya mera dost.’ That immediately put me in a comfort zone. I feel we must do the same with others. Art must also break barriers instead of creating new ones,” says Gupta, who clearly thrives on audience feedback. One of her breakout experiments, Blame (2002-04) saw her commute on Mumbai’s local train as a saleswoman peddling bottles containing simulated blood. “There were a range of reac­tions. Some ignored me, others were uncom­fortable, some spoke with me and someone even bought a ‘Blame’ bottle. The Gujarat riots had just happened and there was a sense of tension and urgency in the air.”

Gupta is A graduate of the Sir JJ School of Fine Arts, Mumbai. After graduating in 1997, she initially worked as a graphics and web designer—where she got her first taste of technology. Since then, she has tended to combine new media and fine arts with startling results. Born and brought up in Mumbai’s Bandra neighbourhood, she was a school topper who shocked her conservative parents one fine day by announcing her decision to take up art. “They just felt I would have an uncertain future as an artist and were hoping that I would become a doctor instead,” she recalls. “And then, when I entered art school it was in a bit of a vacuum. Just a year before I joined Mr Prabhakar Kolte, who was known as a great teacher and orator, had left and for good or bad, the whole abstraction wave sort of skipped me. I do regret not having Kolte sir as my teacher though,” muses Gupta.

Her professors couldn’t understand why she was more interested in something called new media when she was so good at drawing. “All my teachers were really empathetic but they would look at my experiments and say, ‘Good. Par yeh sab ghar pe karo (But do all this at home).’” Gupta, who became a full-time artist in 2005, admits that she has always felt like an outsider in the art world, “That allows for a sense of lightness and one is not weighed down by structures.” She has stayed away from the commercial landscape, remain­ing unfazed against the vagaries of the art market. Sitting in her studio, which doubles up as her private sanctuary, she reflects, “Art is about loving, and auctions about leaving.” In retrospect, she says that after art school she thought she would have a job and make art over the weekend. “Today, I feel privileged to be a professional artist. When many people are wrestling with set routines, I am grateful to be in a space of imagination and freedom rather than numbers and expectations of the market.”