The Inheritance of Loss

The story of India’s contemporary photography movement is ridden with egoistic tussles. It’s no wonder then that it has taken so long for the country to host an international photo festival 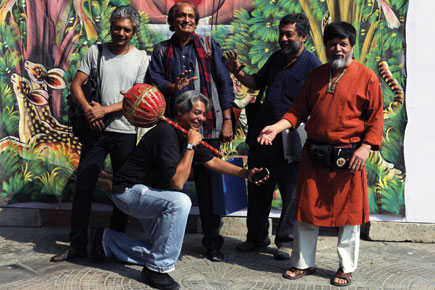 The story of India’s contemporary photography movement is ridden with egoistic tussles. It’s no wonder then that it has taken so long for the country to host an international photo festival


I am not a photographer. Never have been, never will be. For me, the world began with the word, a curse and a blessing. A curse because I will never know what it’s like to experience the world through a camera lens. A blessing because I enjoy being a ‘fly on the wall’; because, unlike photography, the written word has the power to document both the visible and the subterranean. An image may ‘speak a thousand words’, but sometimes you need a writer to read between the pixels.

Take the image above, for instance. It’s a sun-drenched afternoon, day one of India’s first international photo festival. All the shadows meld to form an ambiguous mass of tangled feet and form. The subjects are smiling, at ease with each other, and comfortable with being framed against this kitschy backdrop. Each subject is a personality in his own right. From left to right, we have Prashant Panjiar, 53, Prabhuddha Das Gupta, 51, Raghu Rai, 69, Pablo Bartholomew, 55 and Shahidul Alam, 55. Ostensibly, it’s a feel-good photograph, certain to make your lips curl into a smile.

Having spent the last week at the Delhi Photo Festival, I find myself returning to this photograph. Like a sleuth, I look into it for clues that will help me understand the understated dynamic that each of the subjects shares with the other. There’s much more than meets the eye.

As a non-photographer and art critic only on demand, my dedication to attending each session at this festival bemuses me. But I find myself drawn, not so much to the world of photography as to the world of contemporary Indian photographers—the bad-boy, irreverent feel of it, the sense of camaraderie that’s difficult to pin down, and, above all else, the sheer mythic aura that surrounds most of the figures in the frame in question and a few others that aren’t in the frame. Never before had I witnessed three generations of Indian photographers on the same platform. Which brings me to the overwhelming questions that form the basis of this piece: why has India’s first photo festival been so long in the making, especially when the country has produced such inimitable photographers as Raghubhir Singh, Kishore Parekh, Sunil Janah, Raghu Rai, or World-Press-Photo winners like Bartholomew and Swapan Parekh? The Jaipur Literature Festival, India’s premier literary festival, is already half a decade old, and since Independence, the art world has hosted a series of large-scale exhibitions and summits. Why the lacuna in the world of photography? Was there ever an attempt to organise anything of this magnitude before? And finally, what are the factors that have conspired to make this much-awaited photo fest a reality?

On Day Two, the Casuarina Hall at the India Habitat Centre had far exceeded its capacity. The festival’s organisers, Panjiar and Dinesh Khanna, apologised profusely. “We thought only 30 people would show up,” said Panjiar. There were easily at least 200. Dayanita Singh was the star attraction for the afternoon. After the crowd had settled into every nook and corner of available space, she began her talk with a story about a “forum” that existed many years ago which she said was like an “all-boys’ club”. Apparently, when one of the members of the club informed the others about the existence of a certain Dayanita Singh, Bartholomew retorted with a question, “Who’s Dayanita Singh?” This single question, she said, would be the title of her talk, and she dedicated the session to Bartholomew, who was seated beside her on stage.

The previous evening, both Singh and Alam had mentioned the Forum in passing, and had spoken almost elusively about there having been much talk among its members to organise something like a photo festival, which never materialised. “There was too much talk, too much pontificating, but nobody actually did anything,” Bartholomew said.

“I was never a part of the Forum,” said Rahman. “I think Raghu had a problem with me. He misread something I’d written on photography for India Magazine. I had said that Raghubhir Singh was the only Indian photographer to have made a mark internationally, as a photojournalist and within the gallery and exhibition scene. And Raghu had attained the status of pop-superstardom. This was sometime in 1989. I think Raghu got upset and thought I was denigrating him, but that wasn’t at all the intention. Also, I don’t think the Forum regarded me as a real photographer because I was mostly doing architectural photography at the time.”

Rahman was part of another forum, the Professional Photographers Forum, which he says was more interested in promoting photography as an industry and lobbied for the cause of the profession: to loosen restrictions on importing equipment, making film more easily available, etcetera. “It didn’t have an intellectual pretension. It was about professionalising the industry,” he said. “The Forum had the idea of doing things more intellectually and there were a lot of ego issues, which was a fact. At that time, there were fewer photographers; you were either in the Raghu camp or the Raghubhir Singh camp or the S Paul camp.”

Rahman traces the explosion of the photographers’ ego to the late 70s, when India Today, India’s first national magazine, had just been launched.

This heralded the era of photojournalists, he said, who came to dominate the field of photography. “There was greater public exposure,” he said. “People saw your name and you got known. It became high profile because at this time, print, as a medium, was very important.”

It was only in the late 80s that a new breed of photographers started to emerge: those who worked independently, outside the realm of photojournalism. This included Rahman, Ketaki Sheth, Sooni Tarapoorwala, all of whom had studied photography abroad and who had connections in the United States because of the influence of Raghubir Singh.

According to Panjiar, part of the struggle was centred around the fact that photography had yet to be acknowledged as art. “Our focus at the Forum was driven by the idea of having photography accepted as an art form,” he said. “It soon slid into negativity when photographers started fighting with each other. I guess we were always looking for solutions outside of ourselves; we wanted the NGMA and the culture ministry to accept photography as art.” Panjiar believes that today, this debate about photography as an art form has finally closed. “We realised that trying to get acceptance was a futile exercise.”

Since then, there have been many advances in the world of contemporary Indian photography. Photojournalism is no longer the centre of the photography movement in India. Where before, most photographers were struggling with the simple task of earning a living, today, almost 80 per cent of the 200 people seated cramped in Casuarina Hall are independent photographers. Cameras no longer need to be smuggled into the country, and the digital revolution has made film redundant. Photography today has become the democratic medium it was always meant to be. The proliferation of magazines, websites, blogs, collectives, and the simultaneous expansion of gallery space to include photography, have helped foster the art form.

Finally, there is the possibility of a dialogue between the older and younger generations. The opening ceremony of the Delhi Photo Festival confirmed this. Organisers, Dinesh Khanna and Prashant Panjiar, founders of Nazar Foundation, a not-for-profit organisation conceived to mentor young photographers, took the backseat and instead of soaking in the credit, highlighted the contributions of a younger generation of photographers, including Sohrab Hura and Vidura Jung Bahadur, who had helped make the festival possible.

“This is a photographer’s festival,” said Jung Bahadur just before he began his talk at Casuarina. He was followed by Ravi Agarwal and Bartholomew, both established photographers. “I think it was Dayanita who said that this festival has brought about a healing for generations of photographers. This is truly an inclusive festival.”

“Dinesh and Prashant were the only ones who could do it,” said Rahman. “They’re the least threatening among all the older photographers.”

“It’s true,” said Panjiar. “We both have a good reputation and don’t seem to threaten anybody. We see ourselves as facilitators between the older generation and the younger generation whom we now want to take things further.”

This, then, is the way I read the photograph in question: Panjiar, carrying on his back the burden of the past. Rai and Bartholomew with palms outstretched, as if bestowing their blessings and delegating all responsibility. Das Gupta standing on the edge, as if he does not quite belong to the photograph. “I went to only one meeting of the Forum,” he said. “I found it too influential. This is the first time I’m actually interacting with the community, and it’s more for the sake of photography than any history with any organisation.” And finally, on the extreme right, Alam reaches out to Panjiar, the gesture of his hand at level with Panjiar’s, a sign that he’s been-there-done-that, single-handedly, almost. Through Chobi Mela, the photo festival he started, and Paatshala, the Subcontinent’s leading school for photography, Alam managed to create a photography movement in his oft-neglected country: Bangladesh.