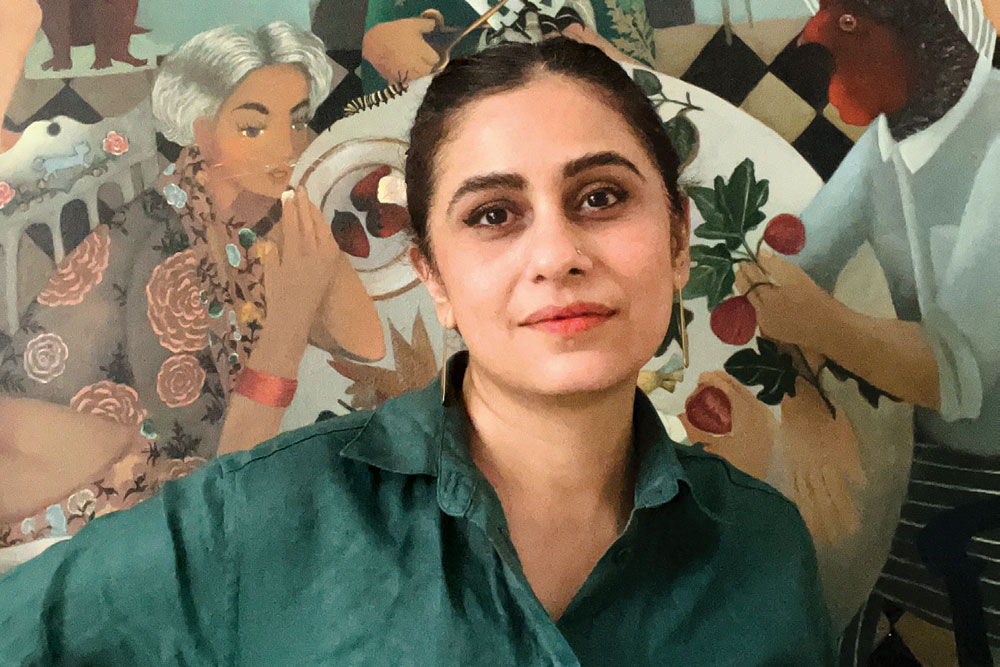 
Meet Phool Bano. True to her name, she wears floral prints to reveal her kinship with the wilderness. Perched on a magic carpet-like blanket and surrounded by wild flowers and guava and lemon trees, she yearns to return home. Now meet Baaraan Ijlal, the creator of Phool Bano. “She’s a version of me,” Ijlal acknowledges. Much like the 45-year-old artist’s other works, the line between fiction and reality is blurred in Phool Bano Ka Khwaab. Currently on display at the Shrine Empire gallery in Delhi as part of a group exhibition titled Forestial Flock, Phool Bano Ka Khwaab is Ijlal’s most recent series—perhaps, also her most personal yet. Phool Bano’s dream is based on a poem written by Ijlal herself while the garden at the centre of her reverie belongs to her mother. Usually, her art is informed by her father Ijlal Majeed’s poems or those of other Urdu greats like Rajinder Manchanda Bani, Mir Taqi Mir and Faiz Ahmed Faiz. This time, she decided to try her hand at poetry herself. “What began as a note on a memory of my mother’s garden and the moss-covered rock ended up as my first

azaad nazm (free verse),” says Ijlal, whose mother tongue is Urdu and who holds a master’s degree in English Literature.

Phool Bano Ka Khwaab is a collection of small-scale paintings. At the Shrine Empire gallery, they are suspended from the ceiling like pages of a diary. Rendered in acrylic on verso, the Urdu couplets written on them carry both literary and aesthetic meaning. Since childhood, Ijlal has believed that the body can be a site of both memory and trauma. Phool Bano Ka Khwaab is more of a parable about the “grief of ruins” (to borrow from poet Agha Shahid Ali), wilderness and the hu­man body’s peculiar tendency to absorb horrors and pleasures at the same time than it is about lost childhood and the shape-shifting idea of home.


Even as we speak, Ijlal has another group show going on in Mumbai that puts her in the august company of some of the most prominent women artists of India. Born in Bhopal and now based in Delhi, Ijlal is a part of the young guard of Indian art who are here to break new ground, one artistic sprint at a time. Largely self-taught, her practice explores memory, sound, language, migration, desire, politics of the body and “to understand the evolution of violence that comes with it,” as she puts it. Her work also places emphasis on the nature of anonymity as being “essential to individual liberty”.

Ijlal’s cross-disciplinary practice straddles multiple mediums and forms of expression. One of them is sound art. First showcased at Ahmedabad’s Conflictorium in 2018, Change Room is an unusual sound installation project, which was designed to offer airtime to unacknowledged voices. Anonymity, the artist reckons, is central to Change Room’s experience. “The journey of Change Room began with me recording my voice on the phone, and when that first person who came to record with me, sat across and shared with me the story of her life, a lifelong trust was built in that moment. We both witnessed each other. The telling and the listening, the many forms of listening, the ethics of listening, listening with my eyes and making my body the medium in this lis­tening, we are becoming a community who prolong our lost memories through the act of speaking and going on record,” she says, adding, “I am excited to see where this listening takes me.” Since then, the Change Room Archives has emerged as a platform where hundreds of untold stories have been documented, cherished and preserved in their origi­nal form. For Ijlal, carrying a recorder every time she steps out of her house has now become a daily ritual. The act of lis­tening, she insists, has taken place in the most unexpected locations. Under a tree in the middle of a forest, on the river bed of the Ganges, in the rooms of a century-old house. “Each location decides how it will receive these sounds,” she explains. “It comes with its own unique energy, politics, sounds and adds to the voices that are telling their stories. With each new site the sound installation evolves.”

The charm of Change Room—which, by the way, is one of those inexhaustible projects that have a beginning and a middle but no definite end— has earned her the title of an “archivist”. She instead describes herself as a “listener,” who knows far too well that a good conversa­tion always begins with just listening. She’s also a born diarist, a sound artist who’s attuned to the background hum that underpins much of our urban spaces and a self-confessed witness, as her immensely powerful series Hostile Witness proves. An artist of today is a many-splendored thing and Ijlal, it would seem, is an epitome of it. “I’m often asked about this,” she laughs, in response to my question about how to categorise her. “To exist outside of the box, it’s a freer space don’t you think? We are fluid and always in transformation. We are not a single being, are we?”

Created in 2014, Hostile Witness depicts a dystopian landscape. In most paintings from this ongoing series, the buildings are decaying and occasionally, submerged in water. They are peppered with recurring watch­words such as Zagh-e-Zaman (the crow woman), Peshrau (early travellers), Jaabir (tyrant colonisers), Mohtasib (moral recruits) and Mukhbir (spies), all symbolic of a world falling to pieces. Yet, the idea of Hostile Witness is very much rooted in the realm of reality. Bubbling beneath its surface, after all, are mounds of memories, narratives of ordinary people ignored by history and homes that have been silent spectators to their own impending doom.

Hostile Witness has been in the mak­ing for nearly a decade. Iqbal Maidan/Bho­pal is easily the most spellbinding paint­ing in this lot. With its deft composition and wooden framing, it appears to bridge the gap between Indian miniature and the fantasy style popularised by the likes of Hieronymus Bosch and Pieter Bruegel the Elder. Its subject matter reflects both the Bhopal Gas Tragedy of 1984 and the more recent pandemic that pummelled Madhya Pradesh’s capital city. The twin disasters had one thing in common— both ended up causing fatal lung infec­tions in its victims. “Bhopal is among the world’s worst industrial disasters and yet, remains largely forgotten. Iqbal Maidan/Bhopal takes us back to the question of whose story gets heard and whose narrative matters,” says Ijlal, who recalls being very young at the time of the Bhopal Gas Tragedy. But it’s a subject that has impacted her art in ways that she can’t even fully express.

“When maps are flawed, you make your own body the map and you acknowledge your being to begin with. You pause and you listen to the voices of your fellow travellers,” says Baaraan Ijlal artist

This project quite literally began its life from her backyard in Bhopal. When she first started archiving her ancestral house she was struck by the question, “Do places remember?” Elaborating on the concept, she says, “If places were to remember at all then you hope that they remember without prejudice and that they remember all narratives. They remember not just the grand monu­ments but also somebody’s name scribbled somewhere on its corner wall because the one who scribbled his/her name has done so to remind us that, ‘Look, I was here. Witness me.’”

Hostile Witness was born from testimonies that Ijlal sought in Bhopal, Mumbai, Lucknow, Kolkata and Banaras. The crumbling dwellings in old neighbourhoods were chosen for their fragility and resistance. The artist spoke to the inhabitants and heard their stories before putting them up on the broader canvas. She says, “I was looking for cities that have existed for over a century and would have layers of stories. They face erasure just like the many species that quietly went extinct, like many women go without telling their story.” While researching for this project Ijlal learnt how flawed the maps of the cities are across continents and have been so for centuries. “Who makes the plan of the city, who is included, who is kept out of it, how far can the human species go as colonisers in pushing every other being out of the plan of this city? When maps are flawed, you make your own body the map and you acknowledge your being to begin with. You pause and you listen to the voices of your fellow travellers.” Listening, she finds, gives her an access to people’s souls and their spaces: “That’s when the site and the plan of the city starts to reveal itself in different ways, especially when those who live around these sites start to narrate stories of their loss, violence and everyday conflicts.”

Ijlal grew up in a world of stories. “As a species, we are forever seeking stories to make sense of this place we inhabit. Stories that are buried in the depths of land and oceans, stories the water leaves behind on the shores, stories we carry with us to our quiet rooms. Stories led me to being an artist,” she muses. The love for stories was further nurtured in a family where literature and poetry were accorded the highest respect. She was trained in “listening as opposed to just hearing” from an early age. As a child, she saw around her social gather­ings, mushairas and mehfils where poets and bards held court while she would listen raptly. “From artists and poets you learn how to express yourself but to be in a space like we were, it also taught us how to keep your eyes and ears to the ground. Such activities prepare you for a lifetime of listening and seeing and opening up of your mind.”

Apart from relying on her father’s poetry as a point of inspiration, Ijlal regularly collaborates with her brother Moonis Ijlal. A historian by profession, Moonis has helped her in devising a new vocabulary of pictographic alphabets for Hostile Witness besides contributing the splendid sculptures that serve as a frame for her artworks. She says working with Moonis has been a nourishing experi­ence so far. But as the siblings prepare to team up once again for an upcoming project that will involve them painting together in her studio, she jokes, “I hope we don’t kill each other in the process!”

(Forestial Flock is on view at the Shrine Empire gallery, Delhi, till October 1) 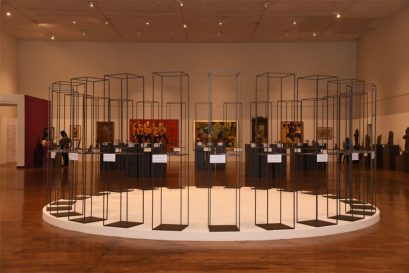