The third of May marks one hundred years of the release of Dadasaheb Phalke’s Raja Harishchandra, the first ever Indian feature film. Paresh Mokashi, director of the Marathi film Harishchandrachi Factory, based on the making of Phalke’s film, recounts Phalke’s extraordinary adventure. As told to Madhavankutty Pillai 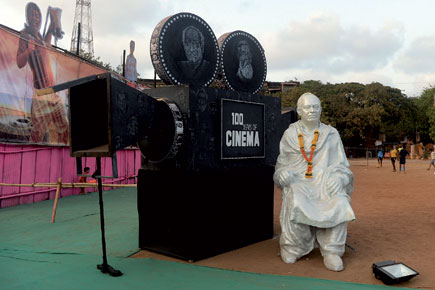 From scouting red light areas for a heroine to a wild ambition on an empty pocket, Dadasaheb Phalke’s extraordinary obsession


I was at the home of my friend, the actor Atul Kulkarni, when I came across a biography of Dadasaheb Phalke. It was written by Bapu Watve in Marathi. I started flipping through the pages. It was a small book, about 100 to 150 pages, and as I read it I started seeing a few visuals in my mind and my imagination went to work. I had always been in theatre and this was the time Atul and I had just finished a production called Samudra. While reading the book, I realised that the ideas going through me right then were not in the theatrical form. I said to myself that there might be a film here. Why not make one on Phalke’s first feature film adventure? That was Harishchandrachi Factory’s genesis. I collected more biographies of Phalke. The basic facts were in front of me. I completed the script in 15 days. I continued to talk to film historians, Phalke specialists and his descendants.

My exploration was to understand what Phalke was about. I decided to focus on those couple of years of the making of Raja Harishchandra, because I saw him coming out very strongly as he was—his character, passion and brilliance. Phalke was from a lower middle class background, but we can call it middle class by that period’s standards. He was born and brought up in Trimbakeshwar near Nashik. Even today it is a small town. The only economic activity that town has is around the temple and rituals. His father was a Sanskrit pandit who got a job in Wilson College, Mumbai to teach the language. Phalke was stubborn about accompanying him. He wanted to get into JJ School of Arts, which he did. He then continued his arts studies in Baroda. He was a brilliant student and that’s why a very wealthy sethji of that time presented him a still photography camera, an expensive equipment. He established a photography studio at Godhra but had to wind it up because of a very strange rumour that the camera sucked the life out of the person it portrayed.

For a period, he was jobless. Ramkrishna Bhandarkar, the famous Indologist, got him a job in the Archaeological Survey of India as a photographer. The details about how they knew each other are missing. Suddenly in a paragraph you find this, and next he’s in Pune meeting Bhandarkar. In 1905, Phalke resigned from the ASI in support of the national movement against the British dividing Bengal in 1905. He joined Bal Gangadhar Tilak’s movement. After another spell of unemployment, in 1906 he joined Raja Ravi Varma’s printing press in Lonavla, my hometown. He learned lithography, engraving and other techniques of printing. It became clear that he had a scientific mind. He could pick up technology fast. He moved to Girgaon in Mumbai after a sethji offered him a partnership to establish a printing press. The business thrived and in a couple of years they were number two in the business, just after the Times of India press. Then again, because of his eccentricity, one day he resigned from that post. While leaving, he gave his word that he wouldn’t start another printing press, and stuck to it. Some creative difference must have led to the split—that’s the only line or reference we get from the biographies.

Phalke didn’t have a business mind. He would spend a lot on something not very useful from a business point of view. It happened often in later life as well. He was part of many film companies but resigned from all of them. As I have shown in my movie, his first encounter with cinema was a chance visit to a booth showing clips of foreign movies, one of them on Jesus Christ. It instantly obsessed him. He had no connection with cinema before that. You can understand his fascination from his character. He would get attracted to different things. In 1901, after seeing a German magician who was touring India, he became his disciple for a year. He learned magic tricks and started performing under the name ‘Kelpha’—an anagram of Phalke. He was more a creative person than an entrepreneur. The entrepreneurship followed the obsession. He was struck by the medium and began to research. He collected books, catalogues, booklets, whatever he could find on cinema and filmmaking. There were British friends who helped him. In the process, he spent a lot of money he didn’t have. All his savings were over and he started selling his home’s furniture and utensils.

One of the things I show in the movie is him contracting an eye infection during that time, which left him blind for a while. I had to include it. A filmmaker who loses his eyesight, what bigger trouble could there be? It is a very basic requirement, a technical requirement. But even then, in that short span of blindness, the first thing that comes to his mind is not what will happen to his life or who will look after his wife or kids. It is, ‘What will happen to my plans of making moving pictures?’

Phalke was someone who was not aware of the problems before him; who had no conception of how difficult it was to do what he was doing. He had no money and needed Rs 10,000 to go to London. That was a big sum then. He showed no hesitation in approaching people to borrow it. Once he got the money, he went to London, studied the filmmaking process, bought equipment and came back. When he left, he knew nobody in London. He went in February 1912 and came back in April. In May, the equipment arrived.

Phalke, in his interviews, had often stated that when he started thinking of making a film for Indian audiences, he naturally thought of famous mythological characters and stories. Raja Harishchandra appealed to him the most because the story contained very basic and strong Indian values—renunciation, keeping your word and so on. A super hit play based on Raja Harishchandra’s story had also been running during the same period. So it was very fresh in people’s minds. The play was a hit in two languages—Marathi and Urdu.

Phalke needed money to start the film and, as usual, he had nothing. To impress financers he thought of novel tricks. He put a seed in a pot and filmed it for a couple of seconds every day over a period of 30-40 days. He made a film of that seed growing into a plant and showed it to people to impress on them the power of the new medium. There was no other way he could make people understand. Films, cinema—these are modern words. They were not at his disposal. Indians were only theatregoers then.

Phalke wanted a woman to play the role of Taramati, Harishchandra’s wife. Women were not allowed to even go out of the house then, forget about having a career. His first choice was his own wife Saraswati, but she put her foot down against it. Phalke had already taught her the ropes of filmmaking. She would shoot, print and develop, do production work, cook and clean for the 40-odd cast and crew, plus take care of the kids. She asked who would do these things if she became the actress? When he couldn’t convince his wife and no other woman was available, Phalke went scouting in red light areas to get a prostitute for the role. Most refused because they considered acting less reputable than their profession. One sex worker agreed and accompanied him home but a regular client of hers came and took her away. Finally, he had to go with a waiter after spotting him in a tea shop.

He asked the men who were playing women in the movie to clean, wash, cook and do all the things that a woman did. It was method acting much before the term was coined. The movie was shot between six to eight months. He built sets first and completed those portions. He then went outdoors to Wangni, on the outskirts of Mumbai, where there is a dense jungle and a river flowing—scenery important for the story. The cast, who had gone before Phalke, was arrested after the police mistook the actors for dacoits due to their costumes.

After the movie released, the response to it was lukewarm for the first two or three days. Phalke then started introducing novel marketing techniques. He came out with funny descriptions of the film, announcing in crowded market places that it is a mile long strip of 58,000 little pictures put together. He offered prizes to ticket buyers. The audience started coming in and the movie went on to make money. He not only recovered the film’s costs, but made profits after paying his creditors. With the money, he made two more films, back to back. In one-and-a-half years, he completed three films—Raja Harishchandra (1913), Mohini Bhasmasur (1913) and Satyavan Savitri (1914).

Even today, every first time filmmaker is a Phalke. He goes through the same difficulties—a shortage of funds, and making others believe in you to bring them on board. There is also the struggle within you, a creative struggle—will I be able to pull it off? What fascinates me most about the entire story is his wife’s contribution. We don’t know much about Saraswati Phalke, but she was a key element throughout the venture. In fact, Phalke even made a film on the making of Raja Harishchandra. I suspect that it was his wife who shot it, because in one frame of the making we can see the cameraman shooting the film. Saraswati was the only other person in the unit who knew how to wield a camera.

As told to Madhavankutty Pillai