The Artist With No Boundaries

Having fled his village in Kerala even before he was 20, Viswanadhan’s art is informed by a lifetime of itinerancy 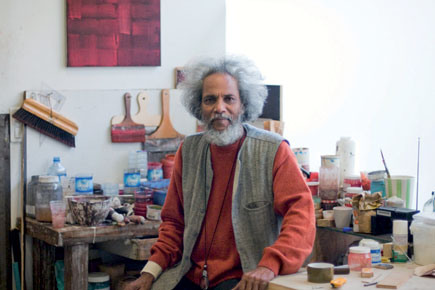 Having fled his village in Kerala even before he was 20, Viswanadhan’s art is informed by a lifetime of itinerancy


In the solitude of Viswanadhan’s studio in suburban Paris, it is so quiet that even occasional titters reverberate far and wide. The Kerala-born artist, who has made Paris his home since the late 1960s, emits a little laugh before saying in a grandfatherly tone, “I have got stories to tell.” And stories he has certainly got aplenty. His atelier is located in the industrial commune of Ivry-sur-Siene, the new Montparnasse, where over 400 artists of different nationalities and temperaments have converged over the years, making it an artistic hub.

Viswanadhan, 72, who is currently one of the leading Indian abstract painters working in Paris, moved here only four years ago after spending many years at rue Ricaut in 13th Arrondissement. “But then, I am used to moving,” he says, ushering us into his new studio at rue Molière after a quick lunch at an eatery next door. When he says ‘moving’, he is referring to the constant itinerancy that has come to define his life and art. Born in Kadavoor in Kerala, he was expelled from college for ‘political reasons’, sending shockwaves across his tiny village. Against his father’s wishes, he shifted base to Madras to study art under KCS Paniker. From Madras, he again moved to Cholamandal, a small village on the outskirts of the city where he helped co-found an artists’ village in 1966.

Both Madras and Cholamandal opened his eyes and altered his understanding of the world. But it was the advice of a friend who came to stay with him at Cholamandal village that changed his life—for the better.

“My friend said, ‘Viswa, this village is beautiful but the world is so big. You must travel and discover the world.’” Heeding the well-meaning advice, Viswanadhan set out in search of new aspirations. Within a month, he had travelled across Europe, including Holland, Denmark and Norway, on his Air France ticket. “There was no hassle of visa in those days. I travelled freely, wherever my heart took me. I was fascinated to have come out of a village and to see the world. I experienced the clash between the traditional and modern, new and old, all the things that Tagore had said in The Home and The World,” he says. By the time he reached Oslo, luck ran out on him. Penniless, he had to sell his paintings for a song to fund the rest of his journey.

Of all the cities and towns visited, it was Paris that called out to him. An impetuous visit to Galerie de France gave him enough reason to settle down here. “I had an envelope tucked under my arm which had some small paintings on paper. The gallery owner snatched the envelope and saw the works. Later, she visited my studio and proposed exhibiting them. She encouraged me by buying a few works. It was all happening a little too fast for me to understand. But I went along where life was taking me,” he says.

How he landed in Paris is interesting. At a time of great financial difficulty, he never imagined that he would collect enough money to travel within India, let alone Paris. The Kannada actress Lakshmi Krishnamurthy, a long-time friend, came to his rescue, offering to organise a show of his paintings in her garden. “I made enough money for a one-way ticket to Paris,” he told The Hindu in 2006.

Viswanadhan’s arrival and his subsequent decision to stay and work in Paris marked a new chapter in his life. He made the most of the seclusion and freedom that the city offered as he began experimenting with different forms and techniques. “I am still experimenting today. An artist doesn’t know what is in store for him,” he says, letting out a half-suppressed laugh.

His early paintings, which he has now digitalised on his iPad, are mainly ink works on paper. Some indicate his admiration of Pablo Picasso, Paul Gauguin, Edvard Munch and Amedeo Modigliani. The subjects are simple and primitive—basically, village scenes executed in stamping ink overlaid with a touch of turpentine. After having accidentally discovered this method, he developed it further.

Talking of how he arrived at this innovative method, to which gold, watercolour and oil were added later, he says, “I was in the house of a friend who was out on vacation. I thought it would be nice to stay there for a few days and work. I started drawing on paper with stamping ink. I wanted to wash it with water. I found this little tin in the balcony. Thinking of it as water, I poured it. Slowly, the preparatory lines and textures emerged. I smelt it. It was turpentine.”

Whereas his works from the 1960s had the looming presence of the female figure, a subject that has long fascinated artists, in his recent canvases you would be hard-pressed to find any inkling of human habitation. “It is not as if I have given up on figurative art. It’s just that you have to move on. If you ask me if I will return to figures, I don’t know. You can never say. Life is repetition, after all—so is art,” he says.

Now, his concerns are almost exclusively geometrical. “My body is like a compass which I use for drawing circles, squares, rectangles and other kinds of layouts. Paintings emerge from this movement,” he says. His inclination towards geometry can be traced back to works as early as in the 1960s. “Geometry is the invisible structure of the visible and one always tries to reach the invisible.”

The monumental canvases that are hung—and those under progress—at his studio are indicative of his obsession with ‘material’. Using casein, a milk protein and water-based medium known for its matt finish and longevity, Viswanadhan creates blocks of horizontal forms. The finished paintings look more like block prints on fabric. They contain no hidden message and are simply to be seen as examples of geometric achievement. The palette is mostly green and red. At most, you can say that the red is inspired by the red earth of Kerala and the patterns are subconsciously a simplification of the designs he saw as a child in the temples of South India. “I don’t like drawing parallels,” he says.

“In some of my early works, if you observe closely, you will see traces of the Malayalam script. I saw the wordings inscribed in temples while I was in college. It was so moving that I decided to make it a part of my painting,” he says, adding, “Painting is seeing, observing, recording and noting.”

Usually, he makes his own pigment. At times, he even prepares his own paper. When he travels, he picks up local paper as souvenirs. His art has no fixed theme, his way of working more instinctive than studied.

“Fundamentally, I am a material-bound artist. I lay out a canvas and work on it. There is never any pre-decided idea or theory. I move my body and hands, and the material guides me. Each painting has its own destiny,” says Viswanadhan, who gave up oil painting in the 1970s because of its slow-drying properties.

The 1970s also marked a turning point. Following a serious accident in Germany in 1976 (his art can be easily categorised as pre-1976 and post-1976), he arrived at an extraordinary moment of self-reflection. Lying in a hospital bed, he heard the doctor ask: “Who are you? Where do you come from?”

“That question hit me. Who was I, really? Was I an artist from Kadavoor, from Kollam, from Kerala, or from India? When somebody asks you about your identity and where you belong, you can say so many things—you, for example, are from Mumbai but Mumbai is in Maharashtra, Maharashtra in India, India in Asia, Asia on Earth and Earth is a part of the Universe.” Post the accident, he cut himself off from friends to rethink his role as an artist and individual in society. “The answer I got was that an artist was someone outside society. He is beyond society and few people can really understand him.”

Convalescing in hospital, a vision of India flashed before him. “I saw the triangle of the map of India, starting from Gujarat and Kerala to Orissa and West Bengal,” he recalls. That was the trigger point for a journey to his homeland, which culminated in a series of films he made on Pancha Mahabhutas, the five great elements of nature.

His filmmaking followed the same rule as his art. Here, too, he was dictated by the ‘material’. “In Banaras, I just kept the camera on a stand and it was capturing images on its own. There was a woman sitting in the water, collecting it in a little pot, praying and pouring it back into the Ganga repeatedly. I didn’t tell the woman to ‘act’.”

He covered 17 cities, and, aside from filming, collected sand from different coasts, a gesture that ended up in a suite of ‘sand’ paintings. These are just some of the ways in which he remains connected to India.

Yet, geographical boundaries do not matter to him. Citing the example of his late friend MF Husain who died in London with a painful longing to return to India, he says, “An artist belongs to the world. Husain was never bothered about whether he was in Prague, Dubai or London. He used to say, ‘I just see the direction of Mecca and pray’.”

At the mention of Husain, Viswanadhan nearly breaks down. After leaving India, they continued to cross paths, remaining constantly in touch. He remembers Husain visiting his retrospective exhibition at the NGMA, Mumbai in 1998. After seeing the show, he invited him to Gaja Gamini’s set. “At dinner time, we went to Husain’s room, but it was locked.

He called out to the watchman and the studio help, but nobody was there. He took a few steps back and kicked so hard that the door broke open,” he laughs.

“So, that was Husain. How can you lock out—or lock in—an artist? An artist is a free bird.”