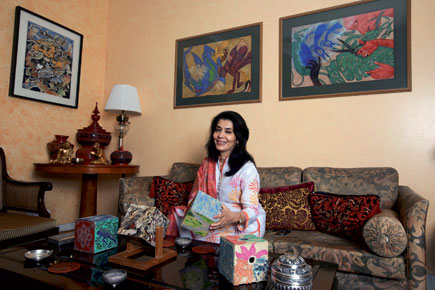 With piles of books scattered everywhere, the large office of art historian Tasneem Zakaria Mehta, managing trustee and honorary director of Mumbai’s Dr Bhau Daji Lad Museum, looks eloquently cluttered. Located at the entrance of the Museum, the office has large vinyl boards of its expansion plans resting on one of its walls. At the opposite end, there is a large table that displays some memorabilia, thick copies of annual reports and a few programme catalogues, among other things.

Over the last few years, Bhau Daji Lad, the oldest museum in Mumbai, has been constantly reinventing itself, blurring the lines between old and new, acknowledging and embracing various new forms of art. While the first half of the year saw the Museum get high praise for its various successes, it also had its share of controversy, as politicians threatened to oust Mehta and the Brihanmumbai Municipal Corporation put her on six months’ notice. Mehta was not fazed. Soon after, Mukesh Ambani came to the Museum’s rescue by announcing a grant of Rs 1.8 crore.

Mehta has a tight schedule when we meet her in the middle of a weekday afternoon. She looks highly composed, a far cry from someone who has been through a storm, even as she mentions an upcoming trip to the Himalayas where she would be completely inaccessible. She squeezes in a little more than an hour to talk about her curatorial style, about her life at the Museum, and her plans for it over the second half of the year. We start with the ongoing exhibitions, especially ‘Games People Play’ by the Delhi-based contemporary artist duo Thukral & Tagra. The exhibition has been seeing plenty of participation from visitors, something she is pleased about.

The show draws from the Museum’s collection of ancient and traditional games and explores the idea of ‘play’ from different perspectives. Right in the main atrium, the two artists have created a colossal vitrine which has been hosting various activities and competitions. In another part of the Museum, there are huge stone wings with space in between for people to stand and get their portraits or selfies taken. The wings are supposed to symbolise the ‘potential of dreams for each individual and the potential for the mind to take flight when it encounters the treasures within the Museum’.

The physical and digital come together in many forms, not least because the Museum’s entire permanent collection has been digitised. Last year, it introduced a regular feature, Video Art, and earlier this year, Mehta introduced Movies at the Museum, which features screenings and informal interactions with filmmakers. “Video is an important part of our programming because it is an important form of visual culture,” says Mehta, “Now there are a lot of artists who are creating film-based work. The divide between what is defined as ‘art’ and what’s not is blurring, and that’s very critical. Art has never been just ‘fine art’ for me.”

The Museum has a well-planned mix of Indian contemporary, Indian 19th century and international shows (often in partnership with other museums around the world) to draw diverse audiences. Mehta is very clear about basing the overall schedule on the idea that Indian art is holistic, handmade and participative in nature. And in this, showcasing contemporary art is equally important. “Most museums in India ignore the contemporary,” she says, “It’s a two-pronged approach for us, as we are showcasing the contemporary talent of India; and through that, the artists are able to do more.” The Bhau Daji, she adds, was established in 1858 with the aim of showcasing contemporary art of the time. The positions of the curator of the Museum and the director of Sir JJ School of Art were held by the same person for over 100 years. So artistic innovations at JJ would be put up at the Museum. In her curation process, Mehta feels that research is the most crucial element. She thinks that curators need to understand their material thoroughly and then engage deeply with the art; for they need to understand how to present an exhibition and how to give it visual strength. “I have curated the whole museum. I moved cases up and down. There was a whole statement being made. It took me 2-3 years of research even for the restoration of the museum.” Being a good curator also requires a lot of looking around to train the visual eye, she says. Whenever Mehta goes abroad, she spends most of her time visiting museums and devouring art galleries. “As a curator, you should be able to say why a work of art is good or bad. Then you have to get into technical aspects, like the idea of form, the spatial aspect, the vocabulary that’s used, etcetera. When it comes to curation, I feel there is a big lacuna in India.”

Mehta is quite hands-on with artists who exhibit their work at the Museum. “I interact with them quite closely. They spend a lot of time here looking at our collection, archives, and meeting our curatorial team. The interaction also depends on the artists, as some are very protective of their work and ideas, and others, mostly the younger ones, often need some guidance. I always give whatever suggestions I have. I am like the visual editor here and my task is to make sure that the overall product is great.”

She is glad that her two major passions—writing and art—coalesce at the Museum. With degrees from Delhi University in English Literature, Sir JJ School of Art in Textile Design, Christie’s in London in Modern and Contemporary Art, and New York’s Columbia University in Liberal Arts, among others, Mehta has been deeply immersed in her love for both art and writing throughout her life. During the conversation, she mentions that she once wanted to pursue further studies in Islamic Art and regrets that she didn’t. Her political background also comes into play in her role as a curator. She belongs to one of the most prominent families of Mumbai: her step-brother is the journalist Fareed Zakaria; her father, Rafiq Zakaria, was Maulana Azad’s secretary and a participant in India’s freedom struggle. “A lot of contemporary art has to do with politics, and with literary theory.” Unsurprisingly, most of the writing in the Museum is done by her.

Another experience that comes surprisingly in handy at the Museum was her stint at Bloomingdales in New York. “When I was working there, I didn’t think it was really going anywhere,” she says, “But it’s funny how things come together. Now I realise that managing a retail store and managing a museum have great similarities, because in both, you are dealing with the public, inventory, events, display, customers, footfalls, targets… how you manage people on the floor. So managing the museum came easy to me.” She clearly takes the business aspect of running the Museum quite seriously, and footfalls are a measure she focuses closely on. “You need footfalls; otherwise you should just give up, because that means your product is not working. If, as a museum, you are not worried about your funding, then you can choose to not worry about your marketing and footfalls either. But here we have to raise funds ourselves and funders will always ask how many people visit the museum.” She cites the example of American museums, which— unlike most European ones—must raise their own funds and have therefore become so adept at PR and marketing that they are dynamic institutions. “In India, we are lagging on this because there is no pressure to perform and therefore there is a laidback attitude. Part of the reason why we [at Bhau Daji] are successful is that we are private-public; and if we were completely private, we would have been 10 times more successful. I have to constantly ask the government to make so many decisions, and that leads to a lot of delay. The paradigm that I want to bring in here is that the state has a role and some say, but more or less we get to function as an autonomous body. And that has been the case up till now.” The public-private partnership was formed in 2003, when the Municipal Corporation of Greater Mumbai, Jamnalal Bajaj Foundation and the Indian National Trust for Art and Cultural Heritage (INTACH) got together to manage the Museum.

Funding, Mehta feels, is a challenge since there are some events that the Museum cannot host. She narrates the story of when Maharashtra’s former Chief Minister Prithviraj Chavan wanted to host a Republic Day dinner at the Museum with high- profile people in attendance, but had to shift venue as the Museum could not let alcohol be served on the premises. “The [party] MNS says ‘This is against Maharashtrian culture.’ That is ridiculous. [The late] Bal Thackeray used to drink wine himself. This is regressive, and at some level, the citizens of Mumbai need to stand up for themselves and counter-argue these baseless statements.”

Of course, there was the Lakme Fashion Show fiasco recently, where the finale couldn’t take place in the Museum as planned after threats were received from the MNS. Mehta gets innumerable requests for such events but has to decline most. Even film shootings have been stopped for now, as she wants to lie low for a bit.

In spite of the six-months’ notice issued to her, Mehta does not seem worried at all. Work seems to go on as usual. “I am only focused on being successful at what I do; 90 per cent of the comments in our feedback book are positive. The overall programming has been a huge success. All the top artists want to do exhibitions here. I have a list going on till 2018. That’s our success.” She adds, “Moreover, we haven’t done anything wrong. If there is a problem, they should come and talk to me, but they haven’t. In fact, Mr Kunte [the Municipal Commissioner] has publicly said that I was doing a great job. We have a legal agreement and I am completely open to any kind of scrutiny. And any scrutiny will prove our credentials and our integrity.”

Mehta’s next six months are quite busy. The Museum’s schedule is packed. In August, it will host an exhibition in collaboration with the photo gallery Tasveer to celebrate the latter’s 10-year anniversary. The exhibition would be looking at the history of photography in India. Another big exhibition is titled ‘Kindred Nations’, which is about a relationship between India and America that goes back to the 17th century. The Museum is also looking at a partnership for special shows with London’s Victoria & Albert Museum.

Mehta is currently busy evaluating event and exhibition proposals for 2016. She is also geared up for new batches of the Post Graduate Diploma in Modern & Contemporary Indian Art & Curatorial Studies offered by the Museum, started under her aegis. Her vision for Bhau Daji Lad, she says, is to provide a platform to all forms of contemporary art. “The idea is to take new forms of art to the public,” she says. “We want to make a difference in how the public feels about, views and engages with these artworks. Otherwise, what’s the point of doing all this?”