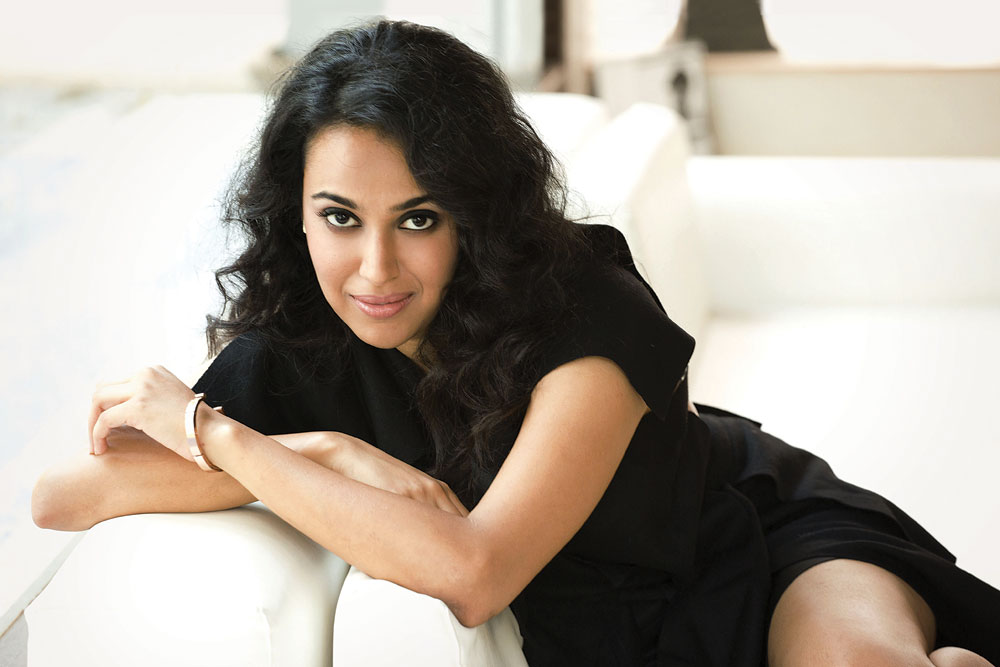 USUALLY WHEN AN actor in India chooses to play the heroine’s best friend or the hero’s rejected lover, people are quick to bracket her. They believe she supports the story, but can never be the story. She’s that face which aspires to be in the foreground, but is always just one step behind. However, five years and a few meaty roles later, Delhi girl Swara Bhaskar has torn apart this misconception. Her latest film Nil Battey Sannata— the story of a widowed house help dealing with her angsty teenage daughter—is her biggest victory to date. “Who would have thought the story of a maid and her struggles would be so universally relatable. It’s not every day you walk into the cinema hall and see people clapping for you in the interval,” she says.

The film, by debutant director Ashwini Iyer Tiwari made in just under Rs 2 crore, is becoming a hot favourite in the indie circuit and attracting more attention than imagined. Here’s a simple, inspiring mother-daughter story which heartens the audience. And most importantly Bhaskar carries its weight alone on her shoulders.

Bhaskar is Chanda, mother of a 15-year-old. In playing the role of a mother to a teenager, she displays a maturity that adds a new dimension to her as a performer. She’s a mother, a friend, a sister, a guide in this film. “It’s always tougher to play a role older than yourself because you are yet to live those experiences. I don’t know anything about being a mother, let alone grappling with the emotional outbursts of a growing teenager. That is why I was attracted to this part. I believe as an actor you need to be constantly uncomfortable in the space that you have chosen. How else will you grow?” she says.

Sleepless and visibly exhausted from the incessant promotions for the film, Bhaskar now sits back in her colourful Versova apartment stroking one of her three cats. Her walls lit yellow are laden with books on one side and vintage film posters on the other. A film which she nearly rejected two years ago has now become an acting milestone for her. “I was told doing this film would be career suicide because I had just played Salman Khan’s sister in Prem Ratan Dhan Payo and people were like, ‘Now if you play the mother of a teenager, no one’s going to bother offering you ‘heroine’ roles.’”

Ideally an actor, irrespective of gender, must play parts that will challenge his or her age, philosophies, sexuality and fears, but in Bollywood not many go by this. Bhaskar was smart enough to look beyond this limited vision. She confesses to being in two minds about the film till the last moment. Playing Chanda was a leap of faith that helped her shun her insecurities not just on screen but in life as well. “We are in an industry that’s constantly trying to look younger, richer, happier and more famous than you actually are. I would have been a fool to reject this part to protect a so-called image, which isn’t even real. It’s funny that I used to wear saris at 18 , when I was studying in Miranda House to look all cool and intellectual, and now at 28, I wear shorts so that I look like I’m 18. As a woman, everything from marriage to bearing children unfortunately comes with implications to your career. But then I thought, ‘Why would I stop myself from playing a part that is so real just because others will perceive me in a certain way?’” she says.

It was this realness that got her noticed in the first place. In her debut film Tanu Weds Manu (2011), Bhaskar stood out as Kangana Ranaut’s best friend who doesn’t mince words to keep her friendship alive. She wasn’t glamorous, neither was she trying to be. In Raanjhanaa (2013), again she was priceless as a woman stung by rejection yet lovelorn for the same man. She chose parts that were rooted in reality, and she accentuated the flaws in her characters to make them her own.

“I’m an impulsive wreck and I think that shows in each of my performances. I was a wreck when I decided to pack my bags and come to Bombay without any idea of how I am going to do this, but that’s just who I am,” she says.

When she speaks, this impulsiveness is evident. She’s dramatic, expressive and exudes an infectious energy. Growing up, she never acted on stage, and says, “My dad used to call me Isadora Duncan. I was a complete nautanki and still am.” The daughter of a college professor and a navy officer, Bhaskar had little reason to jump into acting. She was pursuing a Master’s degree in literature at Jawaharlal Nehru University when one film changed ther life. “I remember watching Omkara and thinking to myself, ‘I want to be on that screen’. I told my parents and they were a bit zapped because I was planning to pursue a PhD in anthropology. So clearly, this was a big shift.” She learnt Bharatanatyam from Leela Samson but had no background or formal training in acting. “When I came to Bombay I knew one writer, Anjum Rajabali, and one assistant director. We know how seriously writers are taken in this country, and we also know an assistant director is the lowest form of life on a film set. I did not have much to bank on, but I knew I had to do this.” She even worked as a copy editor for The Economic and Political Weekly for 30 paise per word before she landed her first film Niyati. “This was a film about a culture in Bihar where grooms were kidnapped and married off so that dowry could be avoided. To date it is my purest performance, because it was innocent of technique and medium,” she says.

Niyati never released, but her real struggle, she says, started after Tanu Weds Manu. “I was sitting with my theatre group one day when I got a call from Himanshu Sharma who’s the writer of Raanjhanaa. I was just thinking to myself, ‘Should I leave in the coming week or should I wait till I sell my house’, and that is when he called. It was a last-minute decision. Another actor had dropped out and I got the part. It’s happened with me a lot, this whole game of fate or whatever you call it,” she says.

That film changed not only Bhaskar’s fate as an actor, but also her approach towards her profession. “I got into a very weird space with Raanjhanaa. I am not religious, but Bindiya was. I don’t go crazy in love, but she did. I was becoming someone I hadn’t ever been. I remember going to Kashi Vishwanath temple with Dhanush and I couldn’t stop crying. When I was dubbing for that last death scene of his, I broke down in the studio. After that I’ve told myself that I will never let a part consume me this much.”

She calls cinema a medium of cheating. “I don’t know if I should say this, but many times when I am intimate with my boyfriend, I’m thinking, ‘Okay this is how I sound, look, feel’. Just to be aware in case I have to play this in some film. I mean that’s pathetic, right? You are so self-conscious that you are using every true emotion of yours for some ulterior motive. We don’t allow ourselves any emotion that’s sacrosanct. I feel guilt at times.” Few would admit this, and that is what makes her different.

In her next film Anarkali Arawali, she plays an orchestra party singer who sings lewd numbers. “I feel like I’ve finally learnt to play this game. As long as they think you are having more fun than you are, more famous than you are, richer than you are, younger than you are, it’s alright.” Does the vanity disillusion her? “I don’t know. Even if 20 years later I leave this industry, I will be performing somewhere, for someone. As long as that continues, I’m happy.”