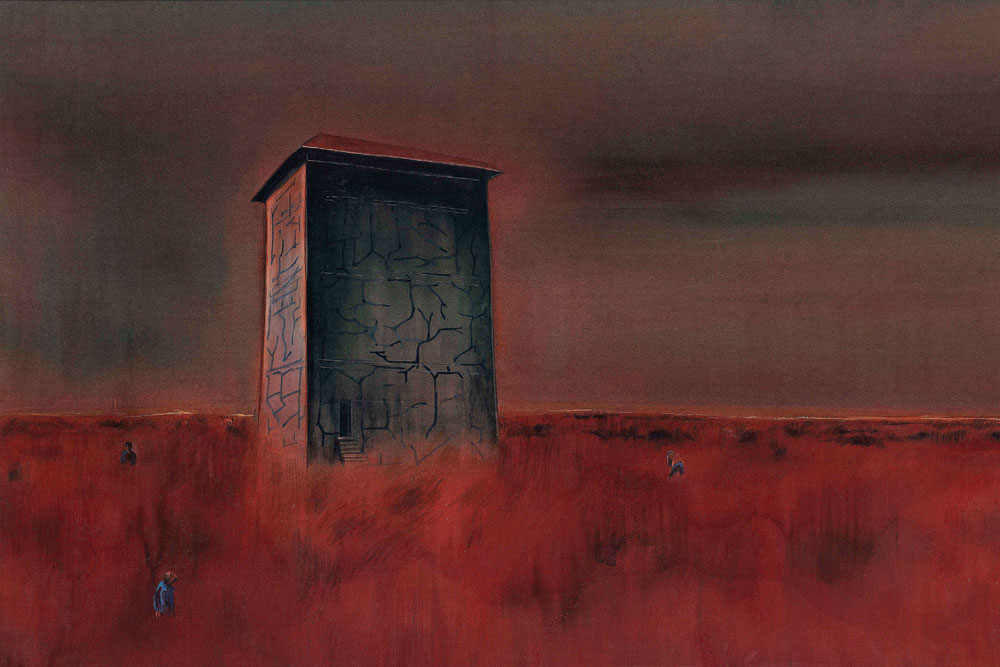 
THE TEXTUAL PRELUDE to Sujith SN’s solo Seer-Seen at Vadehra Art Gallery involves a brief but dense excerpt from an essay by art critic Prajna Desai. You wonder if you should just sidestep the text and proceed, but you can’t contain your curiosity about the source of this new body of Sujith’s work. What sets it apart? What new revelations has he stumbled upon in his avid deployment of watercolour as a medium?

Having followed the painter’s practice before he won the FICA Emerging Artist award back in 2011, which he shared with Charmi Gada Shah, I was eager for an immersion into his visual universe. Desai made a mention of the act of looking implicit in the title. ‘It is impossible to locate where boredom begins and contemplation ends, where the creative contagion of falling into a brown study as someone makes a work becomes a space of intensity that could reshape viewing. How much, before finally turning away, do you end up seeing of the sea?’ she writes. That was as much as I was able to absorb while containing my enthusiasm for seeing the show and managing my conscience, which was punishing me for stepping out on a Saturday morning to view art when I should have been social-distancing at home.

Luckily, Sujith’s landscapes are rarely ever peopled, which was oddly comforting in a time of the coronavirus lockdown. They are frequently vacant and feature structures that seem desolate, abandoned, but that acquire an eerie presence through his deftly delineated lines. You, the viewer, are tasked with bridging the ontological categories of seer and seen through the act of looking. There’s a sense of familiarity to every scene that Sujith presents us with. There are recognisable elements: a stretch of wall, a seascape, granary-like structures that dot the countryside, fields. Yet, each painting has been composed as if it were an event, which feels uncanny, considering there is little information to suggest a happening, or a spectacle. You realise they must each be the consequence of ‘hap’: a kind of chance encounter, a moment when the artist chose to embody the position of a viewer. We are exposed to traces of the artist as a seer.


Over a phone conversation with Sujith, who was safely quarantined in his studio in Mumbai, in the suburb of Borivali, in Kadarpada, I learn I wasn’t so off the mark in my observations. Not only does the 40-year-old artist spend more than an hour as a flâneur, walking the city’s streets, his practice avowedly involves what we decided to refer to as ‘notetaking’. It is an elaborate set of internalisations, involving photography and sketching, which then become part of what he calls his ‘reference library’.

Sujith, whose studio is located within his apartment, starts with a scribble. Over the course of our hour-long exchange, I find he repeats this word often, using it as a shorthand for a space that is in between a textual stage direction and drawing. It doesn’t sound like markmaking, but seems to closely resemble drafting. Sujith doesn’t draw or paint. When he begins, he scribbles, and part of his initial artistic anxiety stems from trying to ascertain the fate of his scribbling in terms of scale. This is a significant part of his initial decisionmaking process. Should the format be largescale or small? He tries to translate this visual strategising into literary terms, for my better comprehension. “Do you want to write a novel or short story?” Calibrating how to expand upon a scribbled composition is the first quandary he must resolve.

Learning about his dilemma with scale offers an insight into the new works on the gallery’s ground floor whose measurements linger between 28.5 x 47.5 inches, 41 x 70 inches, 34 x 80 inches and 34.5 x 82 inches. Besides scale, there are many recurring motifs: a crescent moon presenced by glow worm-like stars, walls with illegible text and singularly cast structures, slightly off-centre. Each is marked by a liquid luminosity that confers each painting with texture, substance and theatricality. You have to often remind yourself that Sujith is working with watercolour, and when you do, you are able to see swatches of great ease with the medium, and moments of reluctance, inhibition. Each painting is layered, but not necessarily intuitively, nor even calculatingly. The artist’s vulnerability in confronting the medium head-on is deliciously obvious if you look past the surface, which is always ‘set’ as if the Arches paper upon which Sujith draws had enthusiastically consented to the collaboration.

There is a point when the surface will tell you that I have become an entity. It tells you ‘I can live’. If you go further, you cross a safe zone, and it surprises you, says Sujith SN

He tells me he begins, usually, with a rust-coloured wash and builds on top of that. Sometimes he goes up to 15 washes. Sometimes he is sure a wash was a mistake, and that knowledge pleases him. It is what makes the process feel theatrical. “That is the beauty of watercolour, that is the complication of watercolour,” he says. He perceives oil as a medium in which it’s possible to hide your mistake beneath a coat of paint, while with charcoal, one can simply rub over, but with watercolour, the error is not as easy to erase, which he is sure lends to the medium an element of performativity. What we encounter as the surface is built through these layers of interventions and in this way his paintings seem to emerge from within themselves as organic sequences, their eerie imagery endowing them with a narrative dyslexia. “There is a point when the surface will tell you that I have become an entity. It tells you ‘I can live’,” he says. Sujith doesn’t interpret this point as a potential finish line. “If you go further, you cross a safe zone, and it surprises you.” He maintains, however, that you must be vigilant “not to abuse the paper”. It is “the clock inside you” that tells you when to surrender authorial agency. This clock is subject to many factors, both internal and external; metered as it is not solely by intuition or your own artistic temperament but the temperature outside and the humidity in the air. With watercolour, you don’t exactly get a second chance, he reiterates.

Sujith presages the accident, incorporating it as portentous of an inherent knowledge that helps him extend his artistic intuition. He allows himself to be subject to ‘drying time’ and to elaborately ‘make’, not just ‘portray’, landscapes that don’t quite seem worthy of being visually rendered as art. He sees the structures within his paintings as akin to objects from the past while also being signboards for the future. “It’s about the now,” he tells me.

When I ask him about his colour palette in the hope of unlocking some of the mysteries that lie at the heart of what makes his work uniquely his and so individuated from other kinds of landscapes, he suggests it has perhaps to do with how he plays with the transparency that watercolour allows you to achieve. He is apprehensive to speak more about it, for fear that I might dwell too much on his technical competence and understate its consequence. But it is, really, his subjective handling of the medium that makes his work so alluring. It is all the complex layering and the imbibing of accidental happenstance that draws you, the viewer, to become seer to his seen. A green hue is never just the result of the application of green; it is the result of at least four colours that have intermingled to evolve a fifth, which is not green as much as it is the idea of a green-hued tonality. The work is an accrual of these depositions of washes and the continuous drawing out of shapes and figures and the relating of earth to sky while configuring the boundaries of the horizon.

I am still unsure where boredom and contemplation fit in within this universe of seeing, and perhaps I am still trying to synthesise my experience of the work with Desai’s suggestion of optical complexity. And yet, I empathise with Desai’s dilemma in having to articulate what it means to encounter Sujith’s landscapes, because he conscientiously resists narrativising what he paints, and he isn’t interested in informing you of the provenance of his image-references. He seems invested in using watercolour to articulate a feeling, and his works, while still rooted in the representational, acquire a fantastical dimension that is un-self-consciously theatrical.

One large painting, And River without a Bend, best substantiates this tendency. Thirteen figures stand at uneven distances from each other. But there is little to suggest they are in a purposeful queue. They just are. And while each one’s face is cast in a halo-like glow, there is no clear source of luminosity. Their reflections meld into the river’s liquid skin whose depiction Sujith has privileged by sectioning off the sky. Unseen within this scene but presaged, is the viewer, who activates the painting through their access of it, thus performing the optical complexity of seeing and being seen, bridging the categories through an embodied hyphen.