State of the Art

Legendary collector Charles Saatchi has his eye on Indian art and the result is a mega show featuring 26 Indian artists in London. 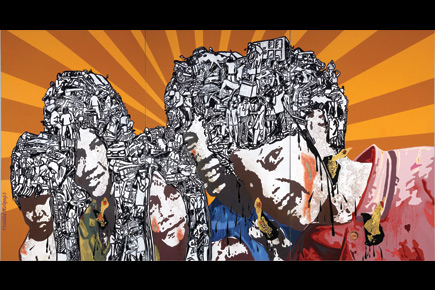 Charles Saatchi has his eye on Indian art and the result is a mega show in London featuring 26 Indian artists.


Charles Saatchi, the famous art collector and notorious recluse, is eyeing Indian art. That’s enough hint for the prices of works by Indian artists to go up in various London galleries. Imagine the fallout of Saatchi actually curating an exhibition of Indian art in his own gallery, drawing from his own collection.

On 29 January, Saatchi unveiled the exhibition of 26 Indian artists, naming it The Empire Strikes Back: Indian Art Today, at Saatchi Gallery. The reception has been spectacular, say the gallery staff, adding that the number of visitors over the first weekend has been the highest since the gallery reopened at its new space in 2008.

This is the fourth show since Saatchi Gallery reopened in October 2008 in the 70,000 sq ft Duke of York’s HQ building on King’s Road in the heart of London, aiming to bring contemporary art to the widest audience possible.

The Empire Strikes Back? “The title refers to the long relationship that Britain and India have had and nods to the legacy of the Raj, and it also turns the notion of empire on its head so that it is now back in the hands of India if you like,” says Rebecca Wilson, editor of the gallery’s online daily magazine and who was closely involved with the show.

Charles Saatchi has been collecting work by artists from India for the last few years and it is clear that, though still relatively small, there is now a very exciting group of artists emerging from India who are doing interesting work that speaks to the Western market as well as explores ideas particular to India.

Explaining why Saatchi chose the India show at this point of time, Wilson says that despite homegrown contemporary art being under-represented in public museums in India, its commercial and international success has allowed small ventures to grow into thriving art galleries in Mumbai, Delhi and Bangalore, with outposts opening in Europe and the US.

Wilson tells Open: “It’s an interesting moment for India and Indian art right now and there does seem to be a particular focus on India in the West. This is partly because of the increasing power of Asia and the sense that India, as well as China, is becoming a country with huge potential and increased power on the international stage. Also, over the past five years or so, India has become part of the international art world in a way that was not the case before… So there is greater East-West dialogue and in the West we are having our eyes opened to a very exciting emerging art scene in India.”

Saatchi personally selected the works from his private collection of Indian art, in a bid to showcase the changing and evolving India as seen through the eyes of the artists. Featuring 26 artists means a very wide range of work. There are, however, a few themes which recur—the legacy of the Raj, the influence of Gandhi, migration and the increasing urbanisation of India.

The best known artist, of course, is Subodh Gupta, who has been dubbed by some as ‘the Damien Hirst of India’. Incidentally, it was Charles Saatchi who sponsored Young British Artists, a group which included Damien Hirst himself. Gupta is now represented by galleries in the UK and in Europe. Jitish Kallat and Bharti Kher also have major solo shows opening in London this spring.

Saatchi has also included the works of three artists from Pakistan. Wilson is quick to point out that they are not lumping them with India. “But India and Pakistan share a complex history and that clearly has an impact on the artists, both from Pakistan and India. Similar concerns to do with displacement and migration recur in these works.”