These young musicians from strife-torn places like Afghanistan, Myanmar, Nepal and Sri Lanka are rebels in their homeland. But they believe their music is a weapon of peace. 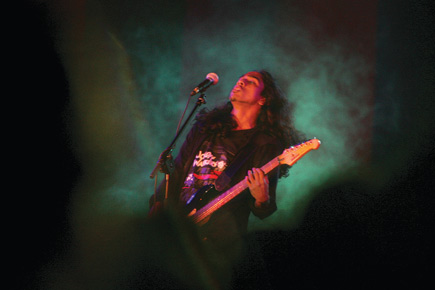 These young musicians from strife-torn places believe their music is a weapon of peace.


Though they look like your regular rockstars, complete with the goatee, long flowing hair and dark shades, there is something that sets this group of youngsters apart. Originating in countries plagued by conflict and tension, these rock bands use their music to reflect the troubled souls of their lands. Their lyrics are powerful, rebellious and fiery. They not only question issues like social hierarchies, dictatorship, regulation of free speech and expression, but more importantly, they tell the youth of the power of dreams.

In India as part of the South Asian Bands Festival organised by Seher—in collaboration with the Ministry of External Affairs—these rock bands presented their musical message earlier this month. The audience was treated to various genres of rock music by bands such as Kabul Dreams (Afghanistan), Paranoid Earthling (Sri Lanka), Emperor (Myanmar), 1974 AD (Nepal) and The Early Birds (Maldives).

As one listened to these young musicians, one could feel that it hadn’t been an easy journey for them. Take the case of the trio from Kabul Dreams, who came together early this year to form the first rock band in Afghanistan. “It is not easy to do any kind of music in Afghanistan, rock even more so as it doesn’t have an audience,” says Siddique Ahmad, who performs Indie Rock along with Sulaymon Qardash and Mujtaba Habibi.

A role model for all these young rockstars is Zaw Win Htut, lead singer of the Myanmarese band Emperor, who has been fighting government regulation of art and music since the 1980s. A legend of rock music in Southeast Asia, Htut has been facing government scrutiny for his lyrics, album covers and the length of his hair. The government first stopped his performance in 1990, when it prohibited long-haired performers. In response, Htut shaved his head. This soon became a fashion trend, and was again banned by the government.

Htut, along with his band Emperor, began by translating English hits into Burmese and soon ventured into original song writing. Their song I Am the Conqueror became a huge hit across the country. It was released shortly after the military crushed the student movement in late 1988. Their lyrics were regulated by the Press Scrutiny Department, which hated screaming and exclamations of any kind in music.

All these bands are united in their worship of rock gods like Led Zeppelin and Pink Floyd. “Rock music has the ability to reach out to people regardless of race, religion and cultural differences. I think, the music of Southeast Asia, specially bands like Parikrama, is now making waves in the world,” says Mirshad Buckman, vocalist and lead guitarist of the Sri Lankan band Paranoid Earthling. Mirshad, along with Asela, Shanka and Dhanushka, formed the band in 2001 when they were in school. Back then, rock music was not as popular in Sri Lanka as it is now. “At that time, our sound was very similar to grunge bands like Nirvana and Smashing Pumpkins,” says Mirshad. Their music now includes elements of psychedelic, funk and stoner rock music. Most of their songs are a reflection of the issues plaguing Sri Lanka.

“Our country has been surrounded by war and corruption in the last 20 to 30 years. Amidst the unfairness, censorship and suppression, it is only through our music that we can give vent to our ideas and thoughts,” Mirshad adds. Their song, Bringing Down the Sun, was released amidst the climax of the war in Sri Lanka and beseeched to everyone to drop hatred.

Living and performing in countries facing external and internal security threats can take its toll on a band. With blasts happening near performance venues and gigs getting cancelled, it surely is a tough life for these musicians. “Disruption of shows is quite common as a result of strikes, road blocks and protests. Sometimes, it is regulation by authorities that leads to these disruptions. For instance, we had to stop singing the song Sambhodan as it was dedicated to the late King Birendra,” says Adrian Pradhan, vocalist of the Nepalese group 1974 AD. The name of this band is a tribute to musicians of the rock’n’roll decade of the 1970s. “We try to imbibe these influences in our music, which is essentially a collaboration between Nepali folk and Western rock,” adds Adrian, who formed the band in 1994 with Manoj KC, Nirakaar Yakhthumba and Sanjaya Shrestha.

According to these bands, the changing times and the changing face of the youth spells good news. The need for harmonious living and united thinking is motivating people to use the arts as a powerful weapon of peace. More youngsters are now taking up music and producing their own albums. The lines of conflict are slowly diminishing. “Let me tell you an interesting story. All of us in the band come from three different parts of Afghanistan, speak three different languages and belong to three different ethnic groups. These groups have forever been fighting with each other. While we were coming to India, an officer stopped us at the airport in Kabul and asked us how the three of us even came together. However, this was something that hadn’t even entered our consciousness. That’s what pleases me about the youth today—they are getting away from ethnic and lingual conflicts. When the youth takes charge, only then will music thrive,” says Siddique.