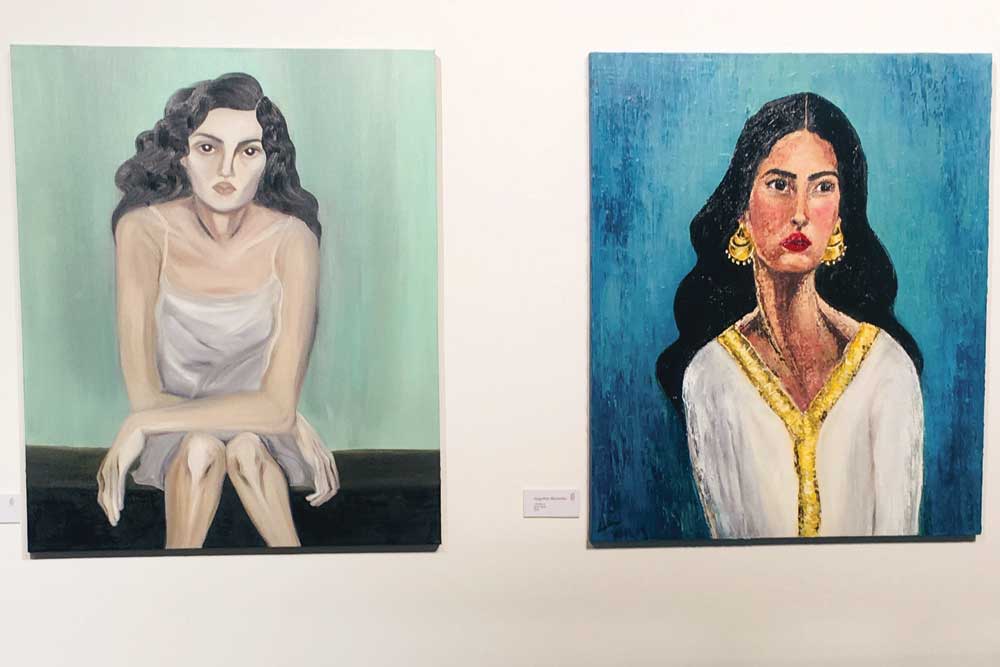 BAHRAIN-BASED ARTIST Duaa Jamal Alaamer’s fascination for art was ignited by her experience at the Manchester School of Architecture where many of her projects amalgamated architecture with digital arts. The 24-year-old illustrator started experimenting with art on Photoshop “as a way to raise awareness about gender inequality in the region”. Today, most of the young artist’s work is driven by issues and topics around female empowerment. “I find women to be strong, beautiful beings who need to be celebrated and I do that through my work,” she says.

Alaamer’s digital illustration on card paper—Invisible Hands—in hues of mauve and pink, for instance, shows alien hands cupping a woman’s face, a metaphor depicting “sorority and protection”. In another illustration, she creates a parallel universe where other-worldly women roam free in their own cosmic galaxy of equality. “By drawing alien chicks, I’m portraying the strengths and uniqueness of women as extraterrestrial creatures unfettered by earthly rules.”

The fair that hosted 16 international galleries from Argentina, Greece, India, France, Belgium, Bulgaria and Saudi Arabia, among others, showcased works of over 100 artists across 17 artist stands, most of them dominated by women.

Exhibiting at ArtBAB for the fourth year running, Lulwa Al Khalifa, a self-taught Bahraini artist, is a member of the royal family. Despite no formal art education Khalifa’s exuberance for painting reflects in the portraits she exhibited at the fair this year—abstract female figures defined by broad sweeping strokes and flat surfaces in vivid colors.

The painter, who has also exhibited at the Victoria & Albert Museum and Saatchi Gallery in London, says female artists tackling women-oriented themes at this year’s ArtBAB is a sign of the times. “We’re a pearling community and men used to go for months on end to pearl dive and so our society was controlled by the women. This independence empowered Bahraini women to be equal. That’s why we’re mindful of our rights in society and issues which impact us directly. This thought is increasingly forming the bedrock of our work.”

According to Kaneka Subberwal, Fair Director ArtBAB, the contemporary art scene in the kingdom can be seen as a harbinger of cultural and social change in the Middle East. “Bahraini women artists are a phenomenal force and are breaking stereotypes about Arab women’s intellectual participation in various fields, including cultural and artistic,” says the former gallerist.

Subberwal goes on to list women artists from the Gulf whose works highlight social issues. “Balqees Fakhro is one of the most distinguished abstract painters from the Gulf,” she elaborates. “Bahrain’s best known Faika Al Hassan’s striking paintings contain allusions to the politics of power and violence; emerging artist, young Aysha Almoayyed’s work is exuberantly experimental and explores Bahrain—its society and transformation of the built and natural environment. There are so many more who I could name. Invariably, I have found that women artists, who constitute a substantial proportion of our participants in exhibitions, are also invested in societal change.”

Apart from state support, private galleries across Bahrain have also created a fertile ecosystem for women artists, both established and aspiring, to showcase their works.

Chloe Vaitsou, the new International Art Director at Art Dubai, that is in its 12th year and was held late March this year, feels the region’s leading art event has been transformational for the art market in the Emirates.


“At the fair a high quality of female artists from the Middle East were showcased in the Modern and Contemporary Section,”  says Chloe Vaitsou, international director, Art Dubai

Vaitsou said at the sidelines of Art Dubai, “Looking around the fair itself there is a such a high quality of female artists from the Middle East who were showcased in both the Modern and Contemporary section at Art Dubai this year, including Ayyam Gallery’s dedicated solo booth to 82-year-old Palestinian abstract artist Samia Halaby to the thought- provoking photography works of Abu Dhabi-born artist Farah Al Qasimi at The Third Line. Not, of course, forgetting Banat Collective, the independent art collective opening up discussions and creative spaces for women across the Middle East and North Africa.”

This year the fair brought together 90 galleries from over 40 different countries, divided across four gallery sections as well as deeper engagement with artists and galleries from non-Western geographies. Participants said that that the emergence of the UAE as a hub for women in the arts has largely been fueled by the transformation and development of the entire region.

“There are numerous women shaping and allowing women to emerge as the voices of leadership in the promotion of art and culture across the region,” explains Smita Prabhakar, founder of the Dubai-based Ishara Art Foundation, a non-profit that promotes South Asian artists.

Prabhakar argues that it is mostly women who have shaped the creative landscape of the UAE today. She rattles off names—HE Noura Al Kaabi, Minister of Culture, UAE; Sheikha Hoor Al Qasimi who is responsible for the Sharjah Biennial, the first biennale in the Middle East; and Rita Aoun- Abdo at the Department of Tourism and Culture Abu Dhabi. In Dubai there’s Vilma Jurkute who is heading Alserkal Avenue, Antonia Carver at Jameel Arts Center, and Maya Allison Director at NYU Gallery.

“These women are ensuring that by leadership which is inclusive, women artists become stronger and empowered,” adds Prabhakar. “At Ishara too, we feel that art helps dialogue among communities so our focus will be on fostering this aspect in our programming. Many of our shows have paid a tribute to strong women and their work.”

It is no coincidence that most of the Gulf artists on show at all three art events were also women. Prabhakar predicts that women artists and curators from the region are a force to reckon with and will continue to “wield great influence on the arts in the years to come”.

INDEED THE FIRST striking thing about the art scene in the Gulf—especially Bahrain, Dubai and Sharjah after visiting their signature art fairs—is that it is almost entirely helmed by women. Most art institutions too, are directed by women.

Lithuania-born Vilma Jurkute heads Alserkal Avenue, the art district that has grown to be a major Dubai site for commercial galleries. It facilitates international exposure for local artists while fostering community development. The warehouse district-turned-gallery cluster features 15 of the region’s strongest galleries in one compact space, showcasing regional and international artists, many of them women. Jurkute has been credited with almost single-handedly transforming the site while making it more inclusive and international.

Nahla Al Tabbaa, a Dubai-based multimedia artist of Jordanian and Bangladeshi heritage and a regular Art Dubai participant, says that a reason for the augmented participation of women artists in art fairs is that as nurturers and caregivers, womenfolk are also more sensitive to community issues. This, she feels, is finding resonance on their canvasses.

“Arts are powerful tools,” elaborates Tabbaa. “They allow for self-expression and growth. And women artists are participating effectively in projects focused on youth empowerment, initiatives promoting gender equality, and those that create opportunities for the disenfranchised.”

According to Nahla Al Tabbaa while female empowerment is still largely measured by traditional markers like women’s achievements in the economic, political, and educational spheres, “arts too can be a good barometer with which to measure change. It provides a vital platform for women to express their views about their identity and their rights within conservative societies not fully accepting of the role of women as culture producers.”

Professor Noha Mellor, co-director of Centre for International Media Analysis, Research & Consultancy, University of Bedfordshire, UK writes in her essay—Empowering Women Through the Arts—that women throughout the Gulf region, as is true in the rest of the world, face a variety of challenges: under-representation in the political sphere, exclusion from or barriers to the workforce, repercussions of family status laws, physical and sexual abuse, and at times, the responsibility of supporting their families by themselves.

She writes, ‘The majority of these creative Arab women seek to remedy injustice in their societies, whether it is directed against women and children in particular, or marginalised groups in general. Through art, they communicate their views concerning the need for further reform—not only the political system, but also the educational system. These women are indeed passionate about reforming Arab educational programmes in order to encourage critical thinking as the bedrock for change and gender empowerment.’

However, despite the media shining the light on the Arab region, surveys have pointed out that there still is ignorance about Arab artists, particularly women, who are mostly confined to home. Worse, the architecture of discriminatory sharia laws in the region cripples female economic independence while bottlenecking their freedom and educational opportunities.

Mellor’s essay also highlights the case of many female artists for whom creativity has been a powerful tool to influence their political surroundings as well. She writes about Iraqi-British filmmaker, Maysoon Pachachi who grew up in Britain, where she received her film education, but her links to her parents’ homeland Iraq have become stronger over the years.

Maysoon returned to Iraq after 30 years to set up the Independent Film and Television College, a free-of-charge film-training centre in Baghdad. Amidst explosions and bombings, the filmmaker felt that Iraqis needed to reflect on their lives and voice their views to the world. To address this, she launched a project called Open Shutters Iraq, inviting 12 Iraqi women of different ages to share their experiences through participatory photography.

Opportunities thus are increasingly being made possible through arts which are empowering a new generation of women. This thought underpins the Sharjah Biennial as well, the Middle East’s oldest biennale. In the cluttered space of international art events, the biennale has today carved a niche for itself by attracting the who’s who of the art world who descend upon the port city to view newly commissioned artworks, installations and art projects displayed across the city.

Founded in 1993, Sharjah Biennial has grown from a traditional and regionally focused exhibition into the internationally recognised event it has become today. To spread its message far and wide, the current edition (on till June 10th), is spread over several sites in and around the city as well as a few off-site venues too.

I hop from one exhibition site to another soaking in artworks at an array of venues, including the Sharjah Art Foundation, the Sharjah Art Museum, and the nearby traditional buildings and courtyards of the Arts and Heritage areas.

The explosion in women making art underscores the complexities of the Gulf. New voices in the creative spheres are leading to good optics, crafting a modern vision of the region as a place that can value women and can respect their opinion.

Besides, as artists like Aamer and Khalifa, as well as art promoters in the region, continue to explore, question and challenge ossified conventions through their work, one can hope that the chipping away of patriarchal narratives in the Gulf has begun.

Neeta Lal
Neeta Lal is a Delhi-based editor and journalist