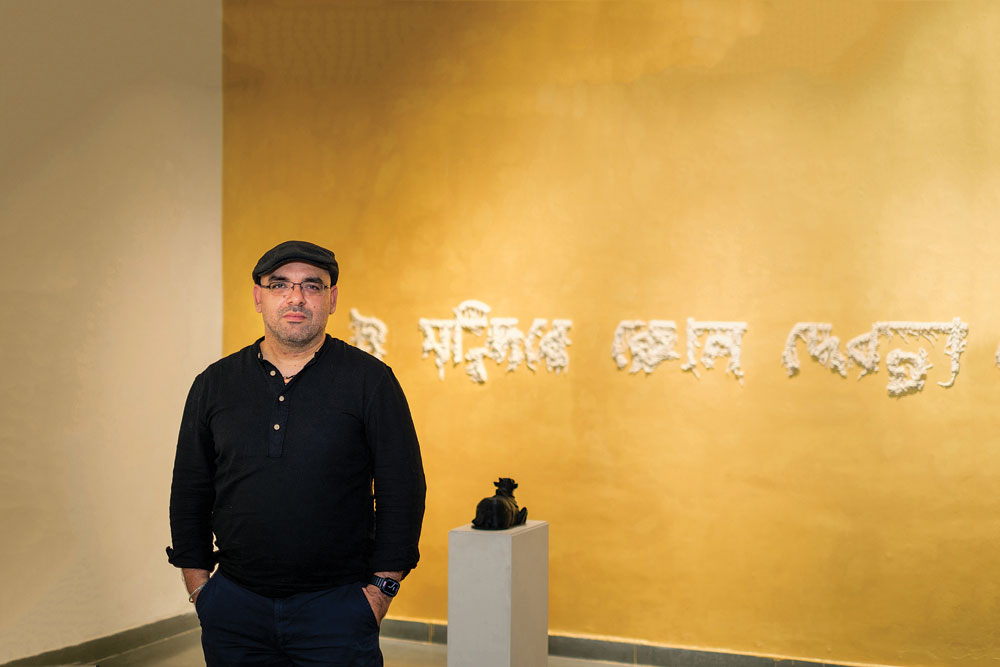 
WHEN ARTIST Shaurya Kumar first became a tenured professor at the School of the Art Institute of Chicago, US, in the early noughties, he spent most of his time at the Art Institute Museum’s Indian gallery. His purpose wasn’t merely to feel closer to his culture, and through it his country of birth; rather it was to observe the manner in which people engaged with the art on display. This purpose stemmed from the awareness that museums do not always translate the underlying message of Indian art in its true essence. Viewers often see Indian art, without its context, as something beyond comprehension, almost abstract. During that period of self-imposed study, an incident sparked off an interesting train of thought. Three elderly Indian women who lived in the area, visited the gallery on Ganesh Chaturthi with the intention of praying to one of the Ganesh sculptures on dis­play, as they had identified it as the exact one from their village in India. They wanted to pay obeisance to this divine object their forefathers had created and placed in a space of reverence, yet in its new home in the museum, they were stopped from doing so by the guard on duty, who insisted, “This is not your god, it’s just a sculpture of Ganesh.”

Sharing that moment, Kumar says, “Isn’t it amazing? The same object placed in a different context could have a com­pletely different meaning—whether art or spirituality. That shift of love fascinated me. I was interested in that aspect, both from an academic archival perspective and from a personal human­istic one. This scene reflected my own journey as it paralleled my move to the US. It made me understand the impact of materiality on abandoning one’s life and moving with just two suitcases, and the ensuing process of preserving one’s cultural identity.”

The safeguarding of cultural identity through memory, became the focal point of Kumar’s artistic practice going forward. It is most evident at his ongoing solo show, There Is No God in the Temple at Threshold Art Gallery in Delhi. Through an eclectic collection of miniature paint­ings, gold leaf on paper drawings, 3D sculptures, porcelain installations and handicrafts, the artist attempts to under­stand the role played by fragmented, de­stroyed or distorted objects in disclosing unexpressed details relating to history and society, nature and culture.

Born and raised in Delhi, India, Kumar was drawn to computer pro­gramming at a young age, and he even represented his school competitively. This early exposure to digital methods of creation spurred him towards the creative arts. He pursued a degree in painting with an elective in printmak­ing at the Delhi College of Art, and later graduated with an MFA from the University of Tennessee, Knoxville. Kumar’s involvement in prestigious research projects like The Paintings of In­dia, which was a series of 26 documen­tary films on the painting traditions of India, made by filmmaker Benoy K Behl, and Handmade in India, which was an encyclopaedic compilation of India’s numerous handicraft traditions, made him aware of his love of research, and his education under stalwarts of the art fraternity inspired him to teach. After completing his master’s degree, he was offered the opportunity of a tenured position in a research univer­sity, to design a new department and curriculum that would combine 2D mediums of art with digital mediums. He hasn’t looked back since, and his work has been exhibited nationally and internationally. With such varied influ­ences at play, the diversity of materials in his work does not come as a surprise.


“I wanted to look into and understand the iconoclasm of destruction that isn’t purposeful in nature but instead happens within the marginalia” says Shaurya Kumar, artist

Through his practice, Kumar has consciously examined questions of divinity in an Indian context. He was appalled when he read a report by the Comptroller General of India to the Par­liament in 2003, highlighting that over 92 monuments previously recorded in a survey conducted a decade ago, were untraceable, and decided to delve deeper. A recent study conducted by UNESCO estimated that between 1947 and 1989, as many as 50,000 idols and artefacts were smuggled out of India, and 2,208 sculptures and idols were whisked away between 2008 and 2012. These stark numbers should come as little surprise if we factor in the illegal trade in arts and artefacts worth $6 billion a year, as estimated by the advocacy group Global Financial Integrity.

Using this illicit trade as a starting point, Kumar put together the exhibi­tion, There Is No God in the Temple, whose title is taken from a poem written in 1900 by Rabindranath Tagore. The poem focusses on a hermit shunning the opu­lent grandeur of a newly constructed temple commissioned by the king as a means to show his wealth and prosper­ity and choosing asceticism over ostenta­tion. Kumar asserts this sentiment is echoed by devotees whose shrines and altars have been looted or destroyed and where originals have even been replaced by replicas in some cases.

This plays out most poignantly in the eponymous central piece at the exhibition. A porcelain installation of the phrase in Bengali font “Oi mandire kono debota nei (There is no God in the Temple)” is hung on a gold wall, as a 3D black sculpture of Nandi, Shiva’s mount and the guardian of his home Mount Kailash, looks on as protector and purveyor of the underlying message. At first glance, it seems the installation is made of cream-coloured threads, refer­encing the concept of wish fulfilment or ‘mannat’ that is so prevalent across religious practices in India. Yet, on closer inspection, one realises that the material used is fragile porcelain, where knotted threads are dipped into porcelain slip and fired. Kumar explains this unique ‘burnout’ process, “Once the wooden fonts and threads are burnt away, what is left is the eggshell thin hollow skin of the porcelain, which is so fragile and delicate. This method is rarely ever used for this purpose and in this particular way, but I was very clear that I didn’t want to make it into a mould as symboli­cally the work shouldn’t be something that can be recast. That goes against the very idea of a mannat.”

“I wanted to look into and under­stand the iconoclasm of destruction that isn’t purposeful in nature but instead happens within the marginalia,” Kumar adds. His fascination with the definition of divinity in objects stemmed from studying the case of Subhash Kapoor, an American art dealer of Indian origin who was recently convicted for the burglary and illegal export of 19 antique idols valued at `94 crore to his own gallery in New York. Kumar was particularly fascinated by the in-depth profile of this criminal and his methods in a 2015 New York Times article titled ‘How to Smug­gle a Saint Out of India’, which in eight succinct steps describes how ancient pre­cious sculptures were taken out of India.

Kumar says, “It was not looting from an economic standpoint, nor from a commercial or political standpoint as with artefacts displayed in a museum, which is part of common discourse, but from a temple which has a spiritual connotation.” Subhash Kapoor would hire local goons to break the lock of the temple, steal the idol, super glue the lock so the theft isn’t easily discov­ered, ship the idols in the middle of the night—specifically Chola bronzes—to a workshop outside Chennai, make a mould of the idol, cast a patina over it to make it look old, get them certified as handicrafts, and then ship the originals rather than the newly made ones. Then he would fake the provenance of the idol as having been outside India before the year 1997, concoct a history of its previous ownership and sell it to various collectors or museums.

Through his work, Kumar highlights that locals suffer the greatest loss when their gods and goddesses are looted. The first work he made as part of this collec­tion called, It’s Mine, No It’s Mine, Now It’s Yours, No It’s Ours, Now It’s Missing! directly captures this sentiment. In it, twelve 3D printed sculptures of vary­ing sizes are arrayed on a handwoven tapestry with wool and dye made to look like a chausar board. Kumar says, “The person who holds the dice is the one who decides the fate of the sculpture. Theoretically, if you were to throw the dice, it will keep changing its status— ‘now it’s mine’, ‘now it’s yours’, ‘now it’s ours.’” Here, chausar itself refers to the concept of deceit when it was used to subjugate Draupadi in the Mahabharata. The hand-knotted colourful rug is strik­ing on its own, yet it is the miniature 3D printed sculptures of stolen artefacts that are particularly poignant—they remind one of cheap reproductions sold at historic sites around the world as souvenirs and tchotchkes, hinting at the mockery of cheap reproductions.

Offsetting the colourful imagery of the chausar board, is a wall of creamy white and shiny 3D sculptures consist­ing solely of broken hands. Titled A Case of the Broken Hands, the work is a reproduction of black-and-white photographs depicting fragments of unidentified sculptures, which were stored in a bookcase at the National Mu­seum in the early 20th century, while India was still under British rule—a ‘case’ that is yet to be solved.

Kumar utilises his print-making skills for the series of drawings on gold leaf pasted on lightweight Japanese kitakata paper, in a work called, If in a Sacred Land a Traveler…. The act of adorning a sacred space with gold leaf is a time-honoured South Asian tradition. He recalls witness­ing worshippers in Sarnath, an exalted Buddhist shrine, smuggling small pieces of beaten gold leaf to paste as an act of reverence, even though it was expressly forbidden by authorities. Through a reductive etching style that is evocative of lottery tickets that need to be scratched to reveal the message beneath, the gold in his drawings is removed to show im­ages, which capture fragments of sacred objects observed on his many travels. The large white margins of the paper further emphasise the fragmentary nature of these reverential symbols.

ANOTHER EQUALLY STRIKING set of art works are Kumar’s miniatures made in the Basohli and Kangra style, with his collaborator, Rajasthani painter Raja Ram Sharma. These are near exact recreations of origi­nal miniatures that focus on divinities and divine spaces. A striking differ­ence between the originals and those of Kumar’s, is the stark absence of the main object of worship, which has been erased to signify the loss and emptiness caused by the act of theft. “In the Rama­yana panel supposedly depicting the Rama and Lakshman duo, one can only see the flora on a luminescent yellow background. Where have the gods gone? Are they pushed out of the frame or have they simply vanished into the margins of our consciousness?” he asks.

The most distinctive piece of this set is Krishna and Radha in a Pavilion, which sets the tone for the viewer in its position adjacent to the exhibition’s in­troductory note. As three beautiful gopis look at an empty pavilion, bedecked to service their lord and lady, a haunting sense of loneliness pervades the scene. We end our walkthrough of his works here, and the artist summarises this painting and his message; “This work illustrates in a very shocking way how people continue to worship the shrine even though it’s not original. It signifies that shift of sacredness, and how one defines what sacred actually is.”

(There Is No God in that Temple by Shaurya Kumar runs at Threshold Art Gallery, Delhi, till December 20)