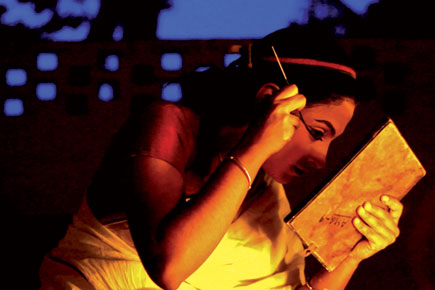 In a dark kalari (literally meaning ‘threshing floor’ in Malayalam and also used in the context of spaces used for learning and training), illumined only by the yellow light of a traditional brass lamp, Kerala-based Kutiyattam exponent Kapila Venu begins her daily after-dusk ritual of eye practice. She is wearing a beige cotton sari contrasted with a mustard blouse; arms folded, eyebrows perched high, almost atop her forehead, she follows instructions—with precision and perfection— from a teacher who ensures her eyes do all the talking. “Let the eyes travel the path where the sky, sea and clouds join… Far off," her teacher says in Malayalam, urging her to use her eyes imaginatively. Kapila’s eyes roll in synchrony; from one corner to another, traversing a long distance, carrying us along, allowing us a glimpse of that sacred spot, somewhere in the distance, where the sky, sea and the clouds dreamily come together.

Eyes are an important metaphor in Kapila, a documentary film that won a National Award this year—in the category of Best Film on Arts and Culture. Eyes, the recurring motif, reinforce the indispensable relationship with Kutiyattam; metaphorically, they sparkle as a symbol for being our window to this ancient, rich, layered, complex and fascinating world. The eyes are also paramount because they are the eyes of Kapila Venu, counted among Kutiyattam’s most talented contemporary practitioners; her eyes are, in a sense, our eyes. We see her, and we see everything she sees in the context of Kutiyattam.

A form of Sanskrit theatre that originated and was performed in the temples of Kerala, Kutiyattam continues to be nurtured by a handful of committed practitioners and loyalists. It is regarded as one of the oldest theatre forms in the world with a history of over 2,000 years.

In Kottayam, where the film’s auteur lives, thinks and creates cinema, Sanju Surendran, who is back after showing the film at the Films Division hall in Mumbai and is gearing up for the film’s premiere at FIDMarseille, an international film festival, recalls his many inspirations in making Kapila. “I wanted to portray Kutiyattam through the eyes of Kapila,” he says, “She is a modern woman, who lives, breathes and practices a traditional art form that requires routine and rigour; in some way, I wanted the film to explore this dichotomy in the two worlds she inhabits, and with ease.”

Dichotomy is a constant in the film that unfurls like a sensory experience, and not merely in the way it moves with ease from images of Kapila as an artiste, and Kapila the person, along with the paraphernalia of her art, her elaborate costumes, but also in the performances that the hour-long documentary presents. It negotiates three very different rasas (emotions)— Shantha Rasa, Sringara Rasa and Raudra Rasa—and allows us an entry point to the potential, possibility and versatility of both the art form and the performer.

Yet, despite the dichotomy, when the film ends—with a powerful act by Kapila as Narasimha (a half-man, half-lion avatar of Vishnu), who with her tongue out, eyes squinted, literally tears open Hiranyakashipu’s heart and consumes his blood—and closes with a shot of Kapila, in her home, flipping through the pages of a Malayalam magazine, you realise that Kutiyattam, for her, is literally a way of life; that the art and the artiste are one.

Kapila, daughter of Mohiniyattam dancer Nirmala Paniker and Kutiyattam exponent Gopal Venu, a performer, teacher and scholar of Kutiyattam, and a senior disciple of Kutiyattam Guru Ammannur Madhava Chakyar, was born into an atmosphere that was rife with the revival and rejuvenation movement of Kutiyattam. “I took to it naturally, and knew it was going to be my life,” she says, “This is where I belong.” Kapila lives with her husband, a seven-month-old baby, and parents in a large compound that is home to two practice studios and is a stone’s throw away from the gurukulam, where she first imbibed the art form herself. She now initiates a handful of students here—rigorously, patiently and without the pressure of a performance deadline.

Almost mirroring the life of a Kutiyattam artiste and the process of training that lasts around 15 years, the film’s beauty lies in its quiet, unhurried rhythm, in its subtleties and silences, in its exploration of details and its expression of rasas; together, Kapila is a powerful articulation of the very form and essence of Kutiyattam. “In a world where we are surrounded by inattention and distraction,” says Surendran, “Kutiyattam is like a matter of attention; in its attempt to elaborate and unravel nuances in episodes and moments from ancient texts, the film is a reminder of the richness of art forms like these; allowing them to pass away is like allowing a civilisation to die.”

A few years ago, UNESCO recognised Kutiyattam as a Masterpiece of the Oral and Intangible Heritage of Humanity. That, combined with the efforts of Kutiyattam practitioners and scholar- writers gave the form much-needed energy and nourishment. Yet, its future lies shrouded in mystery. “Firstly, let me clarify, Kutiyattam was never a very popular form,” says G Venu, founder of Natanakairali (Research and Performing Centre for Traditional Arts) based in Irinjalakuda in Kerala’s Thrissur district, “It was never meant to be that; there were always only a handful of practitioners, but in the past, its artistes were encouraged with many perks and facilities. Each traditional family that practised it, was allotted a large piece of land and with the luxury of agriculture as their primary source of income, artistes spent their day training and getting better at the form.” Things aren’t the same anymore. “The younger generation, for instance,” he adds, “is not interested in the form as much.”

It isn’t easy becoming a student of Kutiyattam. A rigorous art form, it requires from its student a sense of passion, utmost devotion and years of commitment. The initial training requires a student to spend at least six hours in the kalari, perfecting the art of balancing the body, learning hand gestures and understanding complex techniques of the eyes. Since the inception of the gurukulam, and over his years as a teacher, Kapila has trained nearly ten students, eight of whom are pursuing it professionally across the state and in different parts of the world.

In Kerala itself, she highlights a general sense of apathy towards the form. “Audiences are more curious and excited about festivals that are theatre or cinema-centric,” she says, “Their attitude towards traditional artistes, if I were to add, is almost insulting.” But, audiences cannot be blamed altogether. After all, the form in itself is rooted in ancient Sanskrit texts and knowledge of the texts and a certain interest and understanding of the form is imperative. “It is not drama for the common man,” Dr Neena Prasad, Mohiniyattam exponent says, “It is for rasikas—for connoisseurs who can understand and appreciate abhinaya (expression) in detail.”

Elaboration and extrapolation are among Kutiyattam’s prerogatives. Articulation of a single episode from a large text could run into several hours in this format. Kutiyattam festivals, in their original, unedited format, run into several days. Margi Madhu, yet another practitioner and exponent of Kutiyattam, based in Kochi, takes a little break from his make-up before a performance at IIT-Mumbai as part of SpicMacay’s third international convention last week, to talk to Open. “Our centre conducts two festivals, every year. Performances can be long. In unedited versions, a single story can at times be extrapolated over 15 days. It depends,” he says. As a result, it demands of every member of the audience both concentrated patience and an almost-active participation.

“You see, it would be unfair to only blame audiences,” Kapila says, “I think, traditional artistes too seem to be diluting the form and sometimes presenting it very carelessly.” And that has got to do with the training itself. “Kutiyattam cannot be taught over two years, or three for that matter,” she adds, “It calls for several years of investment of time and energy.”

V Kaladharan, who retired from the Kerala Kalamandalam as its deputy registrar and is now associated with its Projects’ Department, notes there is a renewed interest in Kutiyattam in the last five years or so following the UNESCO declaration. “But this is only relative to how things were ten years ago,” he adds, “There is definitely a little more exposure and focus that the form has found, but in terms of the level of appreciation by audiences and organisers, one really doesn’t know.” He also highlights how the form is both progressive and regressive at the same time. “It’s progressive because it is the passing of culture from one generation to another; it is regressive because unfortunately these so-called gurukulams are still deeply rooted in different aspects of caste and community and the resultant discrimination is a downside for the healthy and holistic development of the art form.”

Yet, quietly, and doggedly, Kutiyattam’s practitioners and teachers are doing their bit to imbibe and perform its vast repertoire and also simultaneously thinking of innovative ways of telling contemporary stories, staying well within its framework. A few years ago, Madhu conceptualised and re-interpreted Shakespeare’s Macbeth in Kutiyattam. As a three-and- a-half-hour solo performance (Kutiyattam is usually performed in a group), Margi declares that the “classical nature and the structural strength of Kutiyattam” allowed him the flexibility to accommodate creative experiments. Kapila’s Sita Parithyagam, also based on a text written by her father, addresses the abandonment of Sita; her agneepravesha (entry into the fire), and finally ends with her allowing herself to be swallowed by the fire, and leaving Rama alone. It is one of Kapila’s favourite plays. “It has very strong feminist undertones and is very personal,” she says.

That sounds like a story anyone from anywhere across the world could watch and appreciate. “Yes,” agrees Kapila, “In fact, having performed Kutiyattam across the world, I can say that the audiences in Mumbai and Bangalore are particularly interested in the form, and many among them are young.” Perhaps it has got to do with the kind of theatre culture that exists in the two big cities.

Obviously, then, preservation is imperative. MV Narayanan, professor at the University of Calicut and a researcher-writer, concludes, “I would say that ‘preservation’ is a contradiction in terms—because the moment you decide to preserve something is also the moment that you accept that it is effectively dead or dying. In that sense, then, preservation will only help to create a museum piece that has little bearing on the present other than as a reminder of the past and its forms. On the other hand, I firmly believe that forms like Kutiyattam have to be supported and nourished, its artistes encouraged and rewarded, and audiences educated about it. This is because it can offer a radically different aesthetic as well as alternative structures of spectatorship and appreciation that can counter the mindless and consumerist culture of the country’s present-day entertainment industry.”