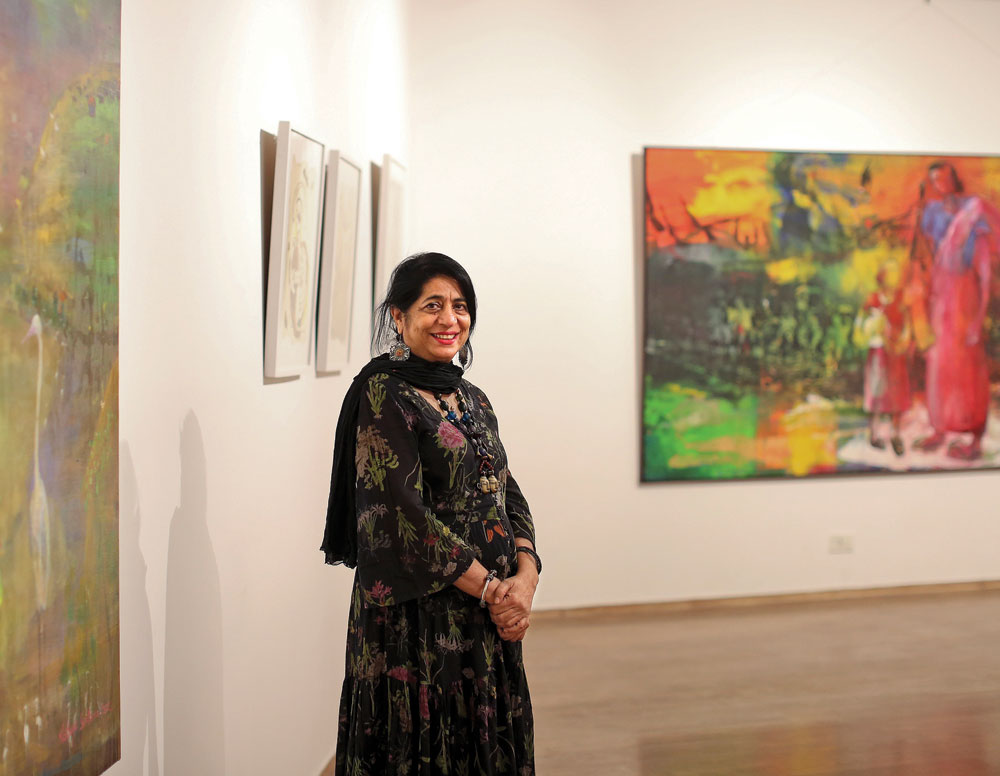 
ON A SUMMER AFTERNOON in Delhi, Rokeya Sultana walks me through a wide-ranging showcase of her art featuring prints, paintings and sculptures she’s been making since the late seventies. The renowned Bangladeshi artist is in town for a retrospective on her work at Rabindra Bhawan, Lalit Kala Akademi, in celebration of fifty years of India-Bangladesh relations. There’s an unguarded simplicity in Sultana’s description of her process. “This is my diary,” she says more than once, alluding to the many moods and seasons one finds in her work. “With my work, I mostly want to show my journey, as a female, how I experience my life, the relation between one human and another. Sometimes, it’s very bitter. Sometimes, good.”

As we talk, a young theatre practitioner introduces himself and asks if he can listen in. The artist presses cups of tea and biscuits into our hands as she wanders from painting to print explaining everything from how personal tribulation led to the emergence of her recurring motif of multitudinous limbs and breasts to the types of rollers she used for her viscosity work on zinc plates.

The exhibition’s opening section is dedicated to work she did as a student in Santiniketan, West Bengal, under the tutelage of Somnath Hore. Hore was known for prints he made chronicling the Bengal famine and the peasant agitations of 1946-47. Sultana would later make similarly socially conscious work on the 1971 independence struggle. With him, she mastered form and composition, often depicting Santiniketan’s landscapes and indigenous people, the Santhals—adding to an already formidable repository of art on the place.

In 1982, when Sultana was a student, beyond the canal, there were only fields as far as the eye could see. “There was no [visual] obstacle,” she says, only goats and clay huts helmeted by hay.

In contrast to the crowded urban scenes familiar to her, her school’s quiet expanse offered “peace, devotion, concentration” —invaluable gifts to an artist aiming to hone her skills. The drawing came easily in those days, though she remarks it was a lonely existence.


One of the chief characteristics of Sultana’s oeuvre is an element of mystery. She mystifies her subjects—a figure shrouded in shadows, a disembodied woman, a key section painted faintly. It was something that began when she was introduced to the Santhal community who she would see return at dusk daily after the day’s work. The time of day, the community’s relative independence from urban centres may have contributed to the sense one gets from Sultana’s art that we only ever understand a fraction of what’s in front of us. She stares fondly at this early work, musing out aloud that perhaps Hore’s instruction led to this art standing the test of time. Two other important influences were Jibanananda Das and Rabindranath Tagore for their resonant melancholy and attention to nature, respectively.

“With my work, I mostly want to show my journey, as a female, how I experience my life, the relation between one human and another. Sometimes, it’s very bitter. Sometimes, good,” says Rokeya Sultana, artist

“My master said to me, ‘You stay another year, because now your work is going very good, you understand the technique, the aesthetic side, so if you work another year more, then I think you’ll get even better.’ Lots of good things he said and maybe today I can see the result of that,” she says. But Sultana was unable to stay on. Getting there had already been an exercise in patience and perseverance, and had involved a degree of luck. Her father would not allow her to go study there. Instead, he gave her hand in marriage and decreed her husband could determine whether she could study art. Though she made it to Santiniketan, she went back without doing the additional year.

The women she depicts often have more than two breasts. She points out that in Italy, a goddess of fertility, Diana of Ephesus, also has numerous breasts. When she began to paint them, she was unaware of her existence. But on a residency to the US, a professor of hers brought it to her attention. She laments the fact that people are reassured when they find historical precedence for artistic choices. “If they don’t, then they ask lots of questions,” she says.

The artist is interested in showing how women are forced to suppress their desires with their sensuality dependent on another person. “In my country, we see lots of widows, single women, houseworkers, and we never think they are human beings with desires,” she says. Through her work, she wants to pose questions on these matters. The amplification of female anatomy is also a way for her to comment on the reproductive power only women possess, which becomes a slant way to emphasise other under-appreciated strengths women have.

“If you’re a sensitive person, and you look at the work with some concentration, you can understand how the female figures in the painting are feeling,” she says. She believes many women will relate to the experiences her art is born out of. She was promoted to a permanent position at her university more than a decade ago, but people still do not always recognise her or her work. It’s been challenging for her to pursue her creative ambitions. “I always have to ask someone. Then they say yes or no. Sometimes, that was a nice experience [to be told yes]. But later on, it felt like a twisting. It didn’t feel good to have to ask anymore.”

She named her daughter Laura after the character in Laura Ingalls Wilder’s Little House on the Prairie series, which she had read as a young child. “When I gave her this name, I was thinking, when I went to Santiniketan, it was a big fight. Something or the other people say, ‘don’t go, you work a lot’.” Even excursions outside the city to the river side or to a botanical garden were grounds for social censure. She was considered eccentric for her desire to paint outside her home. The subversive naming of her child was in the hope that the latter would never have those experiences.

Her painting, Women Are from Venus (2010), is a particularly striking piece at the exhibition. Made at an art camp, portraits of sixty women form the backdrop of the painting. She drew other artists participating in the camp, workers who cooked and served tea, and even people passing by (shown in light sketches in contrast to the detailed etchings of those she had a chance to observe extensively). “[These women] are my energy, power, support,” she says, pointing to the superimposed image of herself sitting on a chair in the midst of these women. Some of the portraits have signatures from those drawn. Many of the artists have come a long way in their skill and their career since then, and Sultana sees this work as a part of art history that shows these various artists at that point in their journey.

Sultana’s output is extraordinarily versatile. After speaking with her, it becomes obvious that the works are in conversation with one another, though there’s often no overlap in aesthetic, colour palette or theme from one work to the next. There is an astonishing explosion of colour in some and muted hues in others. A pair of paintings feature headless female figures carrying goat heads. Unlike the dehumanising practice of promoting literature and films using headless women, Sultana’s choice reflects society’s tendency to disempower women.

Another pair features bonobibi, a guardian spirit of the Sunderban forests, and combines the flora and fauna of Bangladesh and Australia. “It’s my way of bringing bonobibi to [the world],” she says. The spirit is an important one linking both Hindus and Muslims as well as West Bengal and Bangladesh.

Other works are even sharper departures from the rest such as a series of black-and-white sketches prominently featuring angel wings. Coming back to the idea that the canvas is her diary, she says she painted these at a time when she felt as if someone had cut off her wings. “At least in my paper, in my canvas, I have freedom,” she explains. Pointing to a painting of a girl eating a watermelon, she says, “Maybe these girls don’t get to eat watermelon, but in my work, I can give them watermelon.”

“In my country, we see lots of widows, single women, houseworkers, and we never think they are human beings with desires…if you’re a sensitive person, and you look at the work with some concentration, you can understand how the female figures in the painting are feeling,” says Rokeya Sultana, artist

Her series of paintings entitled Madonna rocketed Sultana to fame, earning her awards, money and opportunities abroad. Not expecting much when she started on the series, she was surprised when several of the first works were snapped up by the German ambassador in Dhaka. Her Madonna was often a middle-class saree-clad woman shown running errands, commuting or looking after her child. Seeing classical images of the Madonna and the child, Sultana noticed she was often alone, not flanked by any man and it reminded her of her own life. The relative busyness of both her husband and her child often left her on her own. The overlaps between Christian and Islamic stories of the mother further endeared the Madonna to her. Though her work emerges spontaneously, she later noticed that her Madonna was always on the move. “Perhaps, I wanted journeys for my daughter,” she says. In one work, the figure is depicted with six arms meant to reiterate the impossible number of tasks women are expected to juggle. In her own case, she must meet the demands of her teaching job, housework, family and her art career.

The Madonna success led to a gallery show where the gallery owner presented her with a book wishing her the greatest success. The artist remembers these details with obvious joy. She won a Fulbright grant to study non-toxic, chemical-free print making in the US. Bangladesh did not have book-making classes in their print-making departments. Sultana studied the techniques used in a letterhead press during her grant. “I learned how they used little lead letters in the letterhead press and I applied those in an etching press.” She incorporated lots of found objects she encountered in her regular life as a woman such as table mats to create these prints. The unusual approach earned her a great deal of attention in the US where she travelled giving lectures and demos. Her advice to young artists is to “work, work, work. Confidently!”

Outside, Delhi’s heat is characteristically oppressive. Inside Rabindra Bhawan’s air-conditioned halls, it’s a different world. There is a room where one can watch her paintings brought to life in a similar experience to that offered by immersive artist exhibitions in galleries abroad. The commute and the heat seem worth it to witness an artist with such staggering scope. Sultana’s creations reveal themselves slowly. I would hesitate to call her works ‘beautiful’, instead I would label them textured, storied, engrossing.