Remembrance of things to come

Stretching from Partition through recent violence against women, the work of Amar Kanwar is a constant conversation with history. The reclusive artist explains why 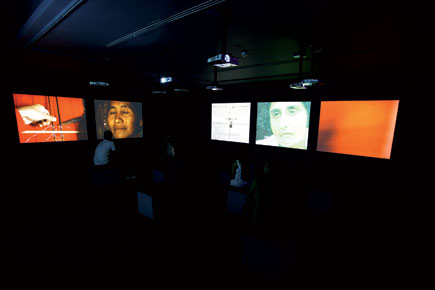 Stretching from Partition through recent violence against women, the work of Amar Kanwar is a constant conversation with history. The reclusive artist explains why

In a dark room in Saket’s Kiran Nadar Museum of Art, eight square stools sit at the centre of eight interwoven narratives which spin out for just over half an hour: “Were there no prophecies hidden in your dilemmas?”; “Why were the attackers not scared?”; “Kill us, rape us, flesh us”, they say. Men and women are quiet as voices from Bangladesh in 1971, Partition, Khairlanji, Manipur and Nagaland’s Mokokchung murmur, then cut to focus on a legendary Manipuri anti- rape protest outside an Assam Rifles camp and the huge, rending wail of the Draupadi figure at its centre. Watching artist Amar Kanwar’s work is like reading a short story by Alice Munro; many stories emerge from within the framework of one larger story. And so, his video installation Lightning Testimonies, in the capital for the first time this year (and on till September end), collates a history of conflict and sexual violence in the Indian Subcontinent.

Kanwar, who won the Leonore Annenberg Prize for Art and Social Change last month, has directed and produced over 40 films. He has also received the Edvard Munch Award for Contemporary Art, a Golden Gate Award at the San Francisco Int- ernational Film Festival and a Golden Conch at the Mumbai International Film Festival, while quietly creating a serious body of work around the dynamics of power and resistance. Based in Delhi yet low profile, he does not give many interviews and is wary of being photographed with his work.

“When I made Lightning Testimonies in 2007, I also made a version I could easily, with not much expense, show to any kind of audience in an educational context, and a Hindi version as well. I wanted to be able to show the content of this work on the day it got made rather than wait for ideal installation conditions,” says Kanwar. He showed the work at Documenta 12 in Kassel, Germany that year and repeatedly around the world, afterwards; currently, parallel shows run in the US at the Art Institute of Chicago and St Louis’ Kemper Museum.

Kanwar once remarked that “the act of remembering is an act of moving forward in time”; he seems to do exactly this, over and over. Thus, the term ‘current’ belies his oeuvre; his films are eerily timely whenever they are viewed.

“There is an indirect connection to Nirbhaya in the Bangladesh section of the film, where the women who were sexually attacked in 1971 were officially called ‘Veerangana’; at that time, of course, the attack on Nirbhaya had not happened, but this title has been conceived by the State, similarly,” he says. “One should think about why a government feels the need to give a glorified title to a victim of sexual violence; why one particular woman, why not another one, why make a monument out of this particular woman? And on one level Veerangana could mean ‘brave heroine’, but on another it also means ‘the woman along the side of the brave’.”

The installation, edited by Sameera Jain and shot by Ranjan Palit, shows that it is possible, even necessary, to watch and hear all these stories. “I felt that perhaps seeing this in simultaneity, in multiple projections, would be a completely different way of understanding this issue,” says Kanwar, who used eight different soundtracks which were carefully planned to come together. “If you see all the projections simultaneously, Hindu-Muslim, Muslim- Sikh, all the frameworks start getting mixed up. ‘This was religious violence’, ‘That was a moment of insanity’— these justifications keep on coming up. Someone will say, ‘If you don’t punish them enough, it will happen’; ‘In times of extreme religious conflict, these things happen’, and so on. But when you see the installation it becomes apparent that all this violence does not conform to most of these justifications. None of the explanations that are being offered to you really work.”

Manipuri actress Heisnam Sabitri performed the controversial play Draupadi (wherein she disrobes and confronts an Indian soldier) after several years for Lightning Testimonies and becomes its solo narrator at the end, for ten minutes; the artist absents himself even more than he usually does, here. Yet, he is powerfully present.

Viewers have written to Kanwar and shared stories; he has watched them watch. The work is a record, a piece of time set down; yet it also has a life of its own. “I learnt a lot about how people remember. For instance, when you are dealing with extreme pain or trauma, sometimes people do not disclose what happened, may not talk about something for 20 years and at a certain time they suddenly talk and often make a pact of confidentiality, insisting on the protection of their identity,” says Kanwar. “Subsequently there are disclosures, and identities are again camouflaged, and so a narrative can end up travelling across generations, cultures and geographies.”

Indeed, narratives seem to leak into each other, story bleeding into story; in the film, a beautifully bare bed lies in the rain, then fades to mountains— then reappears on another screen.

Kanwar studied history at Delhi University and film at Jamia Millia Islamia before first finding an audience with Earth as Witness (1994), about the Tibetan struggle. Then came a trilogy: A Season Outside (1997), around military pageantry at the Wagah border; To Remember (2003), about the Gujarat massacres; and A Season of Prophecy (2002), around caste and cultural differences. His most recent project, The Torn First Pages (2004-08), shows a Burmese book dealer imprisoned for sedition. A Love Story (2010), a lyrical five-minute film set in black-and-white against a Delhi landfill, is one of the only ones he feels he is done adding to. Most of the films are also short, or shorter than is usual.

While making Lightning Testimonies, Kanwar collected objects, including a shawl one screen displays as it is woven, and memorial items which ordinarily might have made it into the work itself. The Sovereign Forest, for example, an ongoing research project exploring the impact of mining in Odisha, began in 2010 and created an epic installation involving film (including A Love Story), texts, seeds. Visitors are invited to contribute to this cumulative library of ‘evidence’, conjured variously around the world and permanently housed in Bhubaneswar, Odisha. When it was shown in 2012 at the inaugural Kochi Muziris Biennale in Kerala (Kanwar is expected to return there this December), local farmers and bureaucrats gathered to discuss the rural world it examines—the kind of interplay Kanwar encourages, in his endlessly accretive idiom.

“When you move a show from place to place, it changes and can become quite different. The Sovereign Forest was in its largest form in Yorkshire. The installation keeps growing, and by the time this exhibition happened, there were 150 or 160 photographs, texts, etcetera, that had been added,” says Kanwar. “There was an 18th century organ in a chapel in Yorkshire Sculpture Park that was being dismantled, and so we used its old and very beautiful local wood and made several Listening Benches. I wrote a few more chapters in The Counting Sisters and other Stories (a hand-sewn collection of stories written by Kanwar) and recorded them and placed soundtracks inside The Listening Benches (the artist’s first sculptural objects for the outdoors). So in a way the stories continued out of the printed book and into the outdoors through the benches, orally.”

The artist works on three or four projects simultaneously, with collaborators. “I’m trying to make a film about the fluidity between fact and fiction, between truth and deception,” he says. “Socially and politically, there is a strong churning taking place, there are many things, many changes happening in the Subcontinent that are very powerful and disturbing.”