Rehana and Shakil Saigol: With Love From Karachi

Artist couple Rehana and Shakil Saigol trace their roots to Kolkata, a city they say nourished their imagination 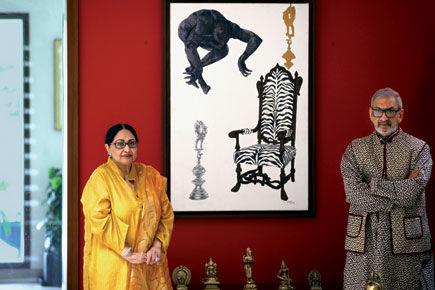 Rehana and Shakil Saigol are consummate storytellers. They conduct themselves with ease and refinement. They belong to a rarefied world, but it never impinges on the conversation. Their world— of the Karachi elite—forms the lively backdrop to a casual chat that ranges from art and culture to politics, identity, and the indispensability of memories.

They represent the artsy, rebellious and bohemian branch of one of the foremost industrial families of Pakistan. Shakil Saigol is a painter, his canvases are huge, his style is richly detailed and somewhat old school, his subjects alternate between the political and the personal. Rehana is a jewellery and fashion designer, a national bridge champion, a passionate promoter of saris in Pakistan, and a kathak dancer who has in childhood performed in front of Queen Elizabeth, Agatha Christie and Jackie Kennedy when they visited her family. They are cousins, known back home as Chand and Chunni. The names of endearment sit well on them. On a drizzly August morning on the outskirts of Delhi, at the sprawling farmhouse of industrialist Arun Bharat Ram, who is a friend of the Saigol family, the couple discuss their social engagements for the day. A game of bridge is planned for the afternoon with Rehana’s old friend and rival in bridge, Kiran Nadar.

They are on their third visit to India this year. “People ask me how I travel to India so often. But this is exactly like home. When I’m here, and I wake up in the morning, I have to remind myself that I’m not at home. Being here is so good for my soul,” says Shakil, in his sprightly voice. He is 70, and she is 68, but they have an essential youthfulness, which perhaps comes from lives lived fully and satisfactorily.

He dutifully scratches the chin of a golden cocker spaniel, Google, who wanders in and out of the room, as Rehana narrates how their life turned around when Shakil walked out of the family business in his forties to be a full-time artist. He unveiled his first solo show in Lahore in 1991, when he was 47. It wasn’t a practicable choice to make. The Saigol dynasty traces its origins to the late 19th century. The family, with its roots in the textiles trade, migrated from Calcutta to Lahore during Partition. In Pakistan, the name Saigol colloquially corresponds with the idea of fabulous wealth. A village in Chakwal district of Pakistan bears their family name, Saigolabad.

It is ironic then that the very thing he cast off, the family business, became his muse and inspiration in a way. Just like Husain had his horses, Saigol has his textiles. In every work of art he has ever done, the one constant leitmotif is the plush depiction of textiles. Take the 2013 series, Still We Are Like That Only, a rumination on the state of education in Pakistan, particularly for women. Most of the works depict women or symbolic objects like books and laptops, chained, shackled or caged. The mood is stark, it is meant to provoke outrage. But the eye is inevitably drawn to the lush detailing of their clothing. They are not just rendered life-like, they positively hum with life. “It is odd. All his life, he wanted to exit that world of textiles, and yet when he picked up the brush, it just flowed out of him,” says his wife.

In a few months, he will open a solo show in Kolkata, a continuation of a 2008 show, ‘Calcutta Revisited’, held in Mumbai and London. The Calcutta series is unvarnished by colour. The scenes of the city, the local people, the rajbaris, the gardens, trams and rain, are in shades of a poignant midnight blue. A sense of yearning lingers over every work. Calcutta is for them more than their home, it is the city they left behind, the one they nourished in their imagination. She was almost a midnight child, born at the brink of Independence, in July 1947. He was five years old when they left for Pakistan. He remembers the daily walk he took with his parents to Victoria Memorial. He remembers his father telling him, “Your first glimpse of Calcutta—and specially of Howrah—should be by train.” He undertook that journey a few years ago. The old family home is now a high-rise. “We only have our memories and the past which must be celebrated,” he says.

They bring up their present home, Karachi. “There’s no place like Karachi in this world. We can’t live anywhere else. But we howl everyday for our city,” says Rehana. Daily freedoms cannot be taken for granted anymore. “We have to employ armed gunmen to drop our children to school. We have to constantly keep in touch with loved ones through the day, look out for signs of violence. You’re lucky you don’t have any of this in India, that daily life feels like daily life. The worst is that the terrorists are our own people. You cannot know what it means to watch your city burn,” she adds. Shakil says that he plans to paint Karachi one day. He has saved red for the city.

The art scene in Pakistan is chiefly a talking point for the way it addresses the tumultuous political and social upheavals of the country, leaving little room for the personal. And yet, left to grow organically, with fewer marketplace compulsions the way India has, it is much more vibrant than we imagine, points out Shakil.“One difference is that the guru-shishya tradition is kept alive in the contemporary art scene. Every artist of note gives back by teaching art in the alma mater. I don’t think that happens in India.”

Out of nowhere, the talk turns to movies. Their daughter Chandni is married to Alyy Khan, the British actor of Pakistani descent who has also actively worked in India. They recommend Bin Roye, a small film from Pakistan that released the same week as Bajrangi Bhaijaan. Irrespective of quality, the very fact that a film is released in Pakistan is a cause for celebration. Bin Roye stars Mahira Khan, who will be seen with Shah Rukh Khan next year in Raees. “She’s very good, except for her nose. I think a nose job would be good for her, I should tell her,” says Rehana. Shakil intervenes, “No no! Look at what happened with Anushka Sharma. It’s a bad idea.” They debate the merits of plastic surgery.

Time is running out. They must leave to meet their family friends. At the end, he feels compelled to add, “People have a warped concept of what Pakistan is all about, that everything is suppressed and everyone is in pardah. It’s far from that. People entertain wonderfully and live well and give back to society.” He ends up reinforcing a familiar stereotype, the two social extremes of Pakistan, without illuminating a middle ground.