For some of us who cannot laugh at Indian TV humour, there is good news. Stand-up comics are coming 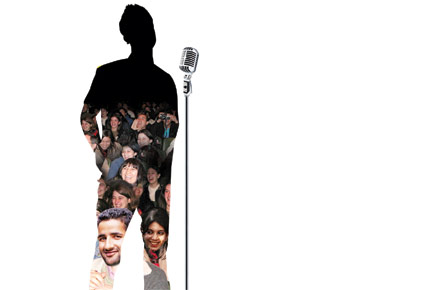 For some of us who cannot laugh at Indian TV humour, there is good news. Stand-up comics are coming


“I was in the US and I walked into the 7/11 store. Thought I would practise my Hindi.”

Jonathan Atherton grinned sheepishly. The Australian stand-up comic was the only one grinning. The rest of the 300-odd people in a Mumbai auditorium roared with laughter. They were young to middle-aged, belonged to different nationalities and two known genders, and all of them were united on a rainy evening in Bandra by a comic act that was peppered with jokes on sex, religion, nationalities and communities, all rude, politically incorrect and, in another era, blasphemous.

Here’s the question: who was this audience? This is a country where public humour has come with defined boundaries: jokes on Sikhs are funny, jokes on India are not. Blake Edward’s The Party from the late 1960s was once banned here because the protagonist played by Peter Sellers was a bumbling Indian film extra who also went ‘birdy num num’ to a macaw. The late 1970s British comedy Mind Your Language was frowned upon for its cast of hilariously unintelligent characters that included a Sardar. More recently, Hindu groups took objection to Mike Myers’ portrayal of a guru in the film, The Love Guru.

By those standards, someone in the crowd should have thrown a glass of wine at Atherton, some others should have burnt the chairs and the rest should have walked out holding placards seeking a ban on everything Australian. But Atherton continued :

“I like Sikhs. They like to drink like Australians. But they are better. They carry a bottle opener on their arm and bandage their head even before they fall down after one too many.”

The audience roared with laughter again. Is this the same India that we have come to know in recent times? Are these the same humourless Indians that Rahul daCunha, mastermind of the satirical Amul hoardings, says cannot laugh at themselves?

On the contrary, this is that other audience: one that does not vote but watches rented DVDs of Entourage and Grey’s Anatomy. This is the audience that saw Atherton perform this June; saw three comedians from the British institution Comedy Store do their gigs in five-star hotels and posh pubs in the run-up to the store’s Mumbai opening in December; watched Indian stand-up Vir Das’ Weirdass Productions do Ham-ateur Night, a show of 11 amateur comics.

This is the audience that international comedians say are ‘cool’. Ian Stone and Paul Tonkinson, who performed recently with the British stand-up club Comedy Store, and Atherton who has also been here before as has British comedian Shazia Mirza, all say it’s a myth that Indians cannot laugh at themselves. They are, of course, talking about these urban Indians who spend Rs 1,000 for a ticket booked over the Internet, dress up for an evening of comedy and physically risqué humour.

Comedy Store in Mumbai will have a bar and performance area. It will launch with international artistes but it will encourage local talent.

There is a big market for English stand-up comedy in India because a particular kind of Indians today cannot laugh at the rubbish that typically passes as humour in this country.

Stone says, “Perhaps India has never had someone funny enough to point out the obvious contradictions in Indian society with enough charm.” Atherton feels, “Indians don’t enjoy being stereotyped but appreciate the humorous aspects of the archetype.”

“You are not an actor called Sanjay are you? Because I don’t want to fuck with him: He is armed.”
Atherton got away with this but Sajid Khan’s digs upset filmmaker Ashutosh Gowariker during a film awards function. Similarly peeved was patriotic veteran actor Manoj Kumar, who went to court when he found no humour at an actor mimicking him in Om Shanti Om.

The film’s producer Shah Rukh Khan and co-host Saif Ali Khan ruffled quite a few feathers with their onstage banter during another awards show. The ones who laughed were not the butt of the jokes.
Atherton and the others, luckily, have found the other Indian.

Most people who commented for this article say people’s attitudes have not really changed but English language stand-up comedy has merely arrived to cater to an audience that would not get its laughs from Shekhar Suman, Raju Shrivastav or the Great Indian Laughter Challenge. The Hindi stand-up that has existed for years before finding its way into television, functions on a different barometer: physical comedy that sticks to safe subjects like mimicry, cricket and politics, and ignores direct references to sex but does not shy away from infidelity.

Television comedy is helped by musical aids that gives broad hints to the on-set audience when the joke has been delivered, aided by Archana Puran Singh’s loud guffaws, where jokes are self-censored to standards of Indian middle-class moralities for family viewing. So when a participant in the show Hans Baliye says “There won’t be any miscarriage,” instead of ‘misunderstanding’, it gets eight points out of 10 from the judges. For humour.

“Women, it’s a myth that sperm is good for your skin. Look at my hands. By those standards, one of my hands should have been a 14-year-old’s.”

Nothing sells like sex, even in comedy. Shazia Mirza, who performed here in 2006, says her audience loved the “rude stuff: the filthier the better. Indians are great. It’s the Pakistanis you have to worry about.”
Such generalisations by foreigners are usually not very insightful. There are two Indians we know. One who watches comedy on TV, the other who attends stand-up shows; one that classifies some jokes as ‘non-veg’, another that says out aloud the three-letter or four-letter word; one that smirks at Shiney Ahuja being ‘bai-sexual’, the other “Who is he?”

It’s as much an issue of class as it is of language. As Cyrus Broacha says, the working man, after a hard day and elbowed out of a local train, would want the loud, free humour of television or Bollywood.
Comedy for Cyrus is not a social event. It’s personal and straightforward. It’s Shekhar Suman over Jay Leno. It’s Lalu Yadav over Barack Obama.

It’s the demographics that have changed, says Quill Potter, promoter of the International Stand-up Comedy Circuit that brought Jonathan Atherton to Mumbai. “It (stand-up) appeals to the sophisticated audience, people who speak English at home. It’s the cultural connection with colonialism that works for the educated, erudite, well-travelled person,” he says.

Broacha talks about taking his popular show The Week That Wasn’t to Hindi audiences, but says it just would not work as a direct translation. How do you translate this into Hindi: “George Bush created the economic slump and like all white men, sent a black man to clean the mess.”

Sophisticated, urban, English-speaking Indians are very few, but for Don Ward, agent-producer-CEO of the Comedy Store, the decision to open here was as quick as a handshake. “Indians do take themselves seriously, so do the comics, and there is a synergy. Indians show off and comedians do need an element of show off. That’s the first thing I noticed in Mumbai: self-importance. Once I saw the old chimney at Phoenix Mills standing tall like a phallic symbol, I knew this was the place.”

Even as The Comedy Store and Potter’s group seek to find Indian talent to take their projects further, Indians are discovering the pleasures of live comedy and appreciating the fact that it takes years of practice and experience, of criticism and beer-throwing bar hecklers, before he can stand in the spotlight, with the microphone and tell hundreds of people something like:

“When I paid to enter the Osho Ashram in Pune and asked for change, they said change comes from within” Or this, “Have you heard this one about a guruji who walks into a hamburger shop and says, ‘make me one with everything’?”