Raghava KK shifts from canvas to performance art, from an iPad app to an installation, from film to a futuristic project with panache 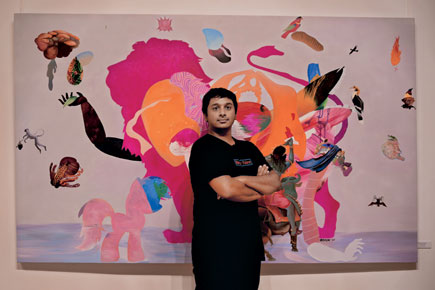 Bedecked with large colourful paintings, the walls of the main gallery at the landmark Jehangir Art Gallery in Mumbai are bursting with energy. It’s an August morning. Preparations are in full swing for the opening of Raghava KK’s new solo exhibition ‘Ridiculous Copycats’, which will later travel to the Art Musings gallery. Less than five minutes late for our meeting, Raghava walks in full of the exuberance that mirrors his artworks, and apologises profusely for being delayed. We meet Raghava in front of his colossal artwork Guernica 2.0, placed at the wall right opposite the entrance, a rendition of Picasso’s renowned anti-war work Guernica which was created in 1937. He was completely stunned when he saw Guernica for the first time, he says, and began to see so much more in it that he decided to “evolve” it. “The best art makes the viewer contribute his or her perspective to it. And I wanted to add my perspective to Picasso’s Guernica,” says the artist.

Raghava’s version is a mixture of nationalistic unrest and personal turmoil told with multiple narratives, and the whole artwork is actually a perspective of a little girl who is looking at the painting from a corner, just like a viewer would. This would be his fifth solo exhibition at Art Musings gallery in Colaba, where the show will be on till 20 September. Based on the themes of diversity and perspectives, the show is a riot of colours, interspersed with a few black and white pieces. The works were first hand drawn, then assembled with the aid of technology, and eventually painted traditionally—acrylic on canvas. He brings together various perspectives from the fields of spirituality, academics, technology, science and history.

Raghava KK started out as a cartoonist in 1997, and is now a well-known contemporary multi-disciplinary artist who works out of San Francisco and Bangalore. His works, often an interesting play between art and technology, span various formats including canvas, performance art, iPad, installation and film, among others. His art has been picked up by international collectors for up to $250,000 a work. A five-time TED speaker, Raghava walked into the spotlight when he was named by CNN as one of the ‘ten most remarkable people of 2010’, and later was awarded the title of ‘Emerging Explorer and Pioneer in the field of participatory art’ in 2013 by National Geographic.

In ‘Ridiculous Copycats’, the 34-year- old artist has crafted a graphic novel style narrative that begins in a simple manner but gradually weaves in complexity, and this complexity reflects society’s increasing diversity. “Each work encompasses life, death, philosophy, ideology and conflict, among other things. I wanted each work to be an ecosystem in itself, and the entire show to be another world,” he says. Peppered with humour, the artworks on display bear testimony to this as each work demands close attention to detail and narrative.

The only black-and-white—and starkly contrasting—images are inspired by his own children. These particular artworks are the outcome of a thought he once mentioned in one of his TED talks: “I can’t promise my child a life without bias—we’re all biased— but I promise to bias my child with multiple perspectives.”

Diversity, perspectives and evoking empathy through art are the overall themes that dominate most of Raghava’s work. His tryst with them started quite early in his childhood, growing up in a Hindu household in a Muslim neighbourhood, attending a Christian school. “I belonged to a time when kids were not being policed so much, so we were exposed to different worlds. That exposure makes me who I am. I am not a particular kind of person. I am a confluence of all these impossible worlds. Therefore, each work of mine is an ecosystem of all these influences,” he says.

Born in 1980, Raghava was inclined towards art right from his childhood, making numerous doodles and cartoons throughout his school life. He was deeply inspired by his mother, who was an artist too. “She would always tell me not to do anything I don’t love. She also taught me to not take anything too seriously, and that’s why you see humour in everything I do, even if it’s a sad thing. Beauty is not always beautiful. There is ugly beauty too, beauty in difficult times. For me, my mother embodied a more honest version of beauty.” This attitude also gives his work authenticity and helps him deal with criticism. “At some point in my life, I realised that I celebrate diversity through my work and it would be ironic if I pretend to want everyone to agree with diversity. So over the years, I have learnt to be honest. It comes at a cost and I have accepted that cost.”

After having left his schooling at 18 and started his career as a newspaper cartoonist, he went to New York where he and his then girlfriend and now wife Netra Srikanth tried to sell some of his artworks. In New York, he was again inspired by the diversity of perspectives all around. “I remember getting a shock when I learnt that all kinds of different families exist in the US. It was yet another exposure to different worlds. I didn’t judge it. I adopted it. For me, the biggest learning after moving to New York was that there are different ways to live and build families.”

He skilfully communicated this learning through his hugely popular iPad app Pop-It that was launched in 2011. The app is meant to teach children that there are many different types of families. Pop-it starts off with two fathers bringing up a child. Once you shake it, you get a lesbian couple, and on another shake, you get a heterosexual couple. This app was part of his quest for creative education.

Over the past few years, he has carved a niche for himself not just in art but in the technology world too, especially with his upcoming venture, ‘Flipsicle: The visual internet’, a social network that seeks to engender empathy. The idea came about after Raghava was invited by Jeff Bezos to share his vision at a think-tank event. The venture aims to reimagine a visual internet and offer a completely new form of knowledge. It stems from his belief in in the power of visuals and how they can mean different things to different people. The venture, almost ready for its official launch in the next few weeks, received funding of $2 million in 2014 from various investors including Neeraj Arora of WhatsApp, Vishal Gondal, founder and CEO of technology and fitness firm GOQii, and Kleiner Perkins’ design partner John Maeda.

Headquartered in New York, Flipsicle bought over a three-year-old Swedish company called MerchiiAB that specialises in monetising visuals. “We have put together a brilliant team at Flipsicle. We have different set of people, including data experts, visual experts, academics, data scientists and hardcore engineers. They challenge me to think like a coder. They would say, ‘Don’t give us stories, give us formulas’, so now we have formulas for empathy, formulas for curiosity, and we are building a curiosity graph as well. So when you use our system, we will make a mental model of who you are. We will be able to understand how curious you are, and what you are curious about,” he says.

The origins of this project go back to the iPad app Pop-It. It also seems to take on from his collaborative project with Sean Stevens where they used brain- wave technology (through EEG headsets) to combine technology with art and make it more interactive. An example of this was his work Mona Lisa 2.0, where the EEG headset measures frequencies from a viewer’s brain waves to indicate his mood, which is then reflected on Mona Lisa’s face in real time.

The more we talk about Flipsicle and his other ventures over the years, the more we realise that Raghava straddles so many different worlds.

He has been involved in an education initiative, NuVu Studios, in association with Harvard and MIT, which aims to redefine creativity in education. He has also lectured at several art institutions and universities, including New York University, Kellogg, Carnegie Mellon, the New Hampshire Institute of Art and the Ecole des Beaux-Arts. He also co-chairs the INK Fellowship program. In between all this, he squeezes in time to write for Mass General Hospital on psychiatry.

Talking about his love for education, Raghava says, “Art is not just about painting, it is a way of seeing the world and a way of being. It’s the politics of knowledge. I want to try and affect knowledge systems, so I work with different sets of people that include scientists, mathematicians, engineers, visual artists, etcetera.”

It is in keeping with this endeavour to expand the scope of his art that Raghava has had some fascinating collaborations with people as diverse as musician Paul Simon, singer and activist Erykah Badu, technologist Sean Stevens, celebrity chef Dan Barber and perfumer Yann Vasnier.

One of his biggest collaborators over the years has been his wife Netra. The moment I mention her name, Raghava is quick to declare that he simply cannot do anything without her. “We respect and love each other, so we can be brutally honest. And we are complete opposites and so we complement each other.” Netra, who takes care of the business side of the work, keeps him in check, he feels. For him, however, it is all interconnected. “It’s not like I am doing completely different things. All my work is connected and motivated by a common idea. I have been through it all —science, technology, academia, visual arts—and I have understood that at the end of the day, we all have our own different truths and emotional needs. We need to understand people, not just by what they say and do, but by what truly guides them.” On a more practical level, he says he is able to take up so much by being extremely hardworking and focused. “I just want to make the most of every day, and I collaborate with smart people who energise me,” he says.

What also contributes to his many accomplishments is his eternal restlessness and blatant optimism, both of which are reflected in his very demeanour. “I am constantly moving, and I am never satisfied. You just need to have that itch to complete yourself, but you should never be able to complete yourself. I am already looking at the show and thinking ‘What next?’”

(‘Ridiculous Copycats’ is on view at Art Musings, Mumbai, till 19 September 2015)