Puneet Kaushik: The Craft of Gratitude 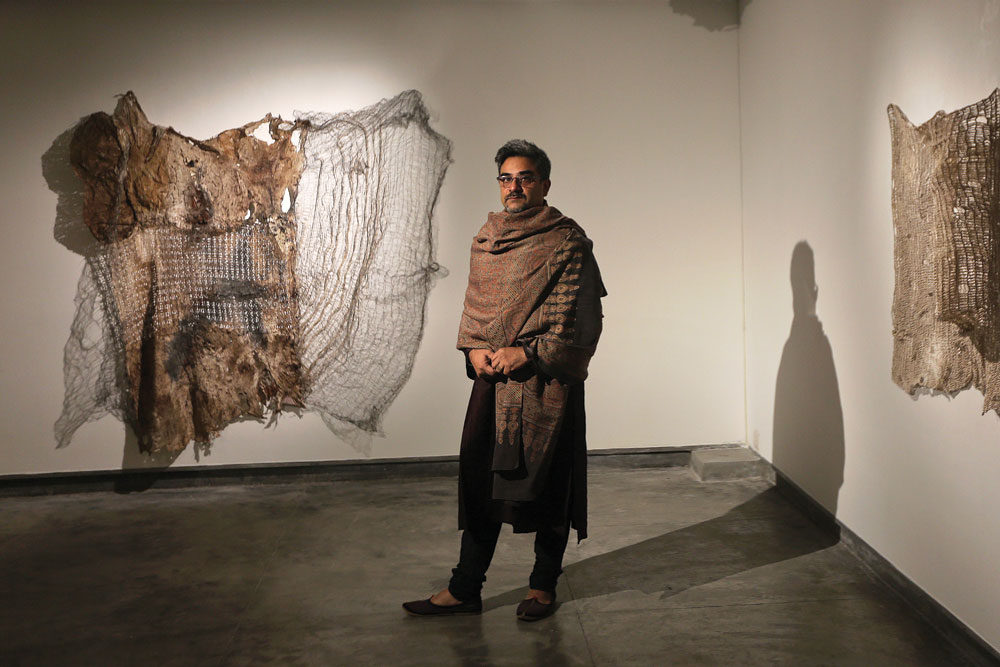 
AFTER THIRTY YEARS of experimenting with art, Puneet Kaushik finds himself agreeing with a sentiment expressed in Walt Whitman’s poem from 1856, ‘Song of the Open Road’. Quoting from it, he says, “Still here I carry my old delicious burdens,/ I carry them, men and women, I carry them with me wherever I go,/ I swear it is impossible for me to get rid of them,/ I am fill’d with them, and I will fill them in return.” For his recently concluded show, Threads of Time: The Material Memoirs of Puneet Kaushik, held at Gallery Espace in Delhi, the artist was inspired by the “delicious burdens” he has accumulated over a lifetime of learning from other artisans.

The collection is part memoir, part homage. Kaushik’s aesthetic has long been associated with a deep interest in traditional crafts, and in Threads of Time, he constructs an ode to the master craftspeople who have informed and ignited his work over the past three decades.

Because the artist is exploratory in his approach, his works remain cartographic at their core. The paths he identifies for materials like thread, perforated paper and even steel move the needle forward for Indian contemporary art. What he learns from his travels across the country and his involved interactions with those engaged in crafts work, he pushes forward through investigation and trials.

The resultant landscapes—though they aren’t landscapes in any conventional sense—reverberate with the old and challenge the audience to glean the new. An appropriate description for Kaushik’s visually engaging, continually evolving work is “alive”. There is often tactile treachery at work in his art. One experiences the textures of the work’s surface without ever touching it. What appears like fabric in one instance resembles desert wind the next. The pieces with beads, in particular, appear as if the surface were bubbling up and about to burst. The interplay of object and shadow, light and shade, and hidden and glimpsed bolster the work with a viscerality that is difficult to shake.

This energy, so replete in his work, is also reflected in his studio. As many artists do, he describes it as a sanctuary. But where he differs from others is in his rejection of silence. The space is intended for collaboration where craftspeople and artists come by for discussions and joint endeavours. Often, these are colleagues he has known for many years from all over the country. They stop by, as curious as old friends, to see what he is working on and he, in turn, travels to their workplaces to educate himself in new techniques and unfamiliar material.

This social, cooperative element is central to Kaushik’s work, and for that, he finds Delhi the perfect place to live. He was born and raised in the capital by a father who was from Rajasthan and a mother who hailed from Punjab. As a civil engineer, his father was posted to various places, and Kaushik imbibed a great deal as a result of his moves.

After studying Applied Arts at Jamia Millia Islamia, he headed to the University of California, Berkeley. This marked a turning point in his journey as an artist. Living abroad changed his perspective on Indian handlooms and handicrafts. When he would attempt to buy a small handmade item, it would cost a great deal more abroad than it would back home. It helped him realise, especially in the context of India as it existed thirty years ago, that handicrafts were taken for granted in his home country.

Kaushik turned his attention to understanding traditional techniques and materials with a seriousness that never went away. He stresses, “That got imbibed into my work. It’s one of the core things. That’s something that Delhi gave me. Because it’s a melting pot. Everyone comes here.” For several years, he has served on the Board of Directors for Dastkar. The organisation now holds crafts fairs across the country. But in Delhi in particular, it is a familiar institution for those looking to invest in Indian handwork. “It gave me an opportunity to work and interact with different artisans. And that built up,” the artist says.


As a city, he believes Delhi has much to offer to the creative individual who benefits from coming in contact with fresh energy and new ideas. He points out, “there’s an endless number of people coming, endless interactions.” In a smaller place, he would not have had the same access to international conferences, trade fairs, museum shows and meetings that come to the city. But Delhi’s charms don’t stop there for Kaushik. Every by-lane he takes leads him to a corner that “looks like an [art] installation.” Every few kilometres, there is a historic monument to be found. The details of Delhi’s weekly Thursday markets and pavement stalls inspire the artist, down to the way a seller arranges his myriad wares on a cart. Going to the iconic neighbourhood of Chandni Chowk for materials is a pilgrimage for the artist. The bustle and cacophony may be off-putting to some, but for Kaushik, it’s these aspects that lend Delhi its character.

He travels with his wife, Rema Kumar, who is a textile designer, when she visits different looms in various parts of the country. As a result, he often collaborates with and learns from the artisans working these looms. His work with traditional craftspeople also requires him to travel. “Just to be in a village where you pick up water to drink from a running stream is an experience in life. That itself becomes imbibed into [my art] in so many ways,” he says. He credits this wandering with consistently infusing his work with an element of newness.

At the time of our conversation, he had just returned from Kohima, Nagaland where he had been working with basket weavers. The baskets are woven from bamboo with the method of weaving providing the finished product with surprising strength. “Those baskets last a lifetime; they’re that sturdy and strong. They fill them with rocks and carry them uphill,” he says. However, the baskets cost between nine and twelve thousand rupees apiece. Kaushik is working on finding a way to make these products more productive so they may survive in the contemporary world.

There’s a raw accessibility in the crafts Kaushik has observed in the interiors of the country with the locals working with the material they have on hand to cater to their pragmatic needs. The artist himself doesn’t like to be bound by the conventional mediums of bronze, canvas, or paper. “I have always strived to carve out my own artistic vocabulary, which relies more on my creative impulse,” he explains. Using whatever material he has or is currently interested in, he stitches, welds, weaves, moulds and meshes. He’s humble about these experiments, acknowledging that the materials master him rather than the other way around.

“Just to be in a village where you pick up water to drink from a running stream is an experience in life. That itself becomes imbibed in my art in so many ways,” says Puneet Kaushik, artist

Much of Threads in Time was completed during the lockdown. Though the artist never considers his work complete, revisiting them even after exhibiting. He adds, cuts and prunes after the pieces return to his studio. He clarifies, “The final composition is not meant to be perfectly balanced as perhaps that of a Da Vinci painting or a Chola period bronze sculpture … my work is imperfect just like the world I inhabit and draw inspiration from.” The pandemic allowed him to stretch his repertoire and understanding of materials. During the nationwide lockdown, he was unable to travel or procure new material for his studio practice. He started using coffee residue, tea bags, charcoal, and graphite on paper and fibre. He admits that the pandemic inadvertently helped him work without social distraction.

Kaushik’s earliest experience with accessible craft came through his grandmother who crocheted. He saw the painstaking effort that went into the delicate pieces. Later, he would see export warehouses full of such work, and be struck by the fragility of the work. “I wanted to make it sustainable, an item that’ll last for a longer time,” he says. For three years, he looked for the right material for his version of crochet, eventually landing on a particular kind of stainless steel wire. In his choice, he sought to acknowledge that he was a man taking on a craft that had long been the domain of women. “We think of steel as a very solid material. The way I used it for crochet, it looks very fragile. Most people think it is feminine, a delicately done thing. That’s my interpretation, my adding to that form,” he explains.

Kaushik’s politics are an intrinsic layer of his art. He often describes himself as someone interested in “issues of identity, gender, violence, and sexuality.” He views his art as a “disruption.”It is a difficult quality to discern in his mixed-media installations and paintings, which are abstract bordering on opaque. Is it the lineation that dominates his work? Or the choice of material? In his 2016 show, Barren Red, the connections between the colour palette and the universality that the artist was trying to evoke cutting across lines of caste, skin colour and religion were more obvious. In Threads of Time, the interpretation is much more in the eye of the beholder. The webbing and perforation stir discomfort within me. How I choose to connect that to the present day changes from minute to minute.

One of the disruptions he identifies in his work is his straddling of the two worlds of traditional art and craft techniques of the Indian subcontinent and that of contemporary art practice. Another is his choice of abstract subjects, ancient craft techniques, and challenging media, which “perhaps signal [his] refusal to be bound by the existing prosaic parameters of art reception and the restrictive notions of contemporary Indian art practice.”But at the most instinctive level, he believes the intensity he puts into stitching the beads into the canvas and the knots into the thread come through to the viewer who he hopes takes back an awareness of themselves.

This much is clear: Kaushik is invested in the Whitmanian burden of carrying forward what he has learned from traditional master craftspeople. He explains, “For me to be able to respond to the realities of life is as crucial as to remain alive.” He worries that traditional crafts are dying out in an increasingly mechanised world. For many arts, there are only a couple of families left actively practising them. As Sanjhi papercuts which are ordinarily done by hand begin to be cut by laser, he fears the old techniques will be lost. He has incorporated the hand-worked cut-outs, which remind him of Mughal jaalis, into his own work. He urges, “Put it into a museum or a gallery that rebuilds its whole story. Help it sustain and survive.”