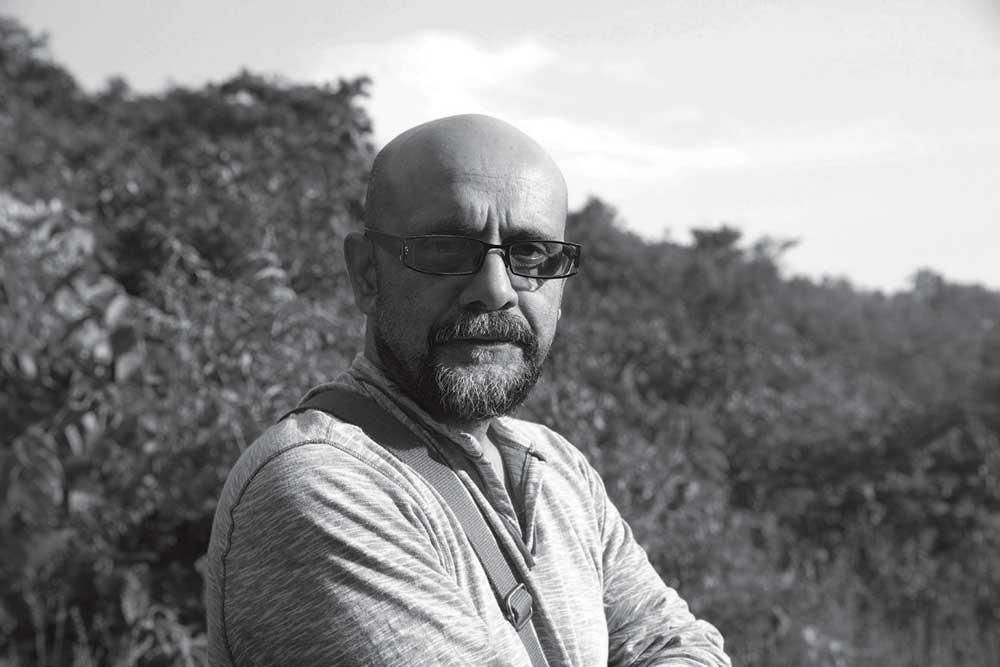 For centuries, artists have chronicled violence and suffering. They depict scenes not only of victory (the raising of the flag), but also of despair (a search for home). Their works plunge a viewer into conflict, and also force her to step back and grapple with not just the scale of the destruction, but personal injury and issues of identity. Following are portraits of five artists who bring the conflicts of their home and the world into their work.

Veer Munshi’s suite of poignant photographs of deserted Pandit homes in Kashmir, falling to ruin or inhabited by vagrants, reflects the notion of conflict by speaking of its aftermath. At the centre of the collage of photographs is a video—of Pandit houses continuing to burn—playing on loop.

Munshi has always been a politically conscious painter. When he came to New Delhi in 1990, one of the first paintings that he was recognised for, by mentor and collector Ebrahim Alkazi, was Terrorist on a Floating Land. The painting shows an ape-like hirsute creature, naked save for a headscarf that hides its identity, and an AK-47 gun that guards its sex. The headscarf covers the creature’s face and shoulders, obliterating all its facial features. The figure stands erect, offset by a blazing red background. It is deeply evocative of the violence that Kashmir was facing at the time. It also speaks poignantly of the artist’s displacement, since he fled Kashmir during the ‘ethnic cleansing’, when thousands of Hindu Pandits abandoned their homes under violence and terror.

‘’It took a lot of courage to visit my ancestral home in Srinagar, where I was born. However, my art has always been inspired by this notion of home, so I had to revisit” – Veer Munshi

Munshi’s work has grown immensely since that painting to include videos, sculptures and installations. His approach, to the unrelenting violence that envelops the Valley, has always been one of aesthetics and ambiguity. He creates shrapnel-shaped cutouts from plywood, papier-mâché skeletons that peep out of velvet caskets, a horse from a Muharram procession loaded with bones and skulls, and adorned in a decorative paisley motif that usually adorns papier-mâché boxes made by local craftspersons.

He started creating the images of discarded homes in 2008. He says, “It took a lot of courage to visit my ancestral home in Srinagar, where I was born. However, my art has always been inspired by this notion of home, and so I had to revisit.” Faced with nothing but rubble at the spot where his ancestral home had once stood, Munshi processed his pain through a series of photographs. “I had to first learn photography. Then overcome the various physical and emotional challenges of shooting in Srinagar,” recalls the artist. The photographs, when first displayed, were standalone works shown at Tao Art Gallery. Munshi has recreated them as a collage of smaller images with a video piece in the centre, for a recent exhibition titled ‘Contrabanned: Provocations of Our Times’, curated by Myna Mukherjee and presented by Siddharth Tagore. As the video work indicates, the conflict is far from resolved.

The playful yet deeply evocative work by Northeastern artist Jimmy Chishi speaks of the identity crisis faced by many Naga youngsters, who continue to be at the receiving end of racist slurs in this country. His acrylic-on-canvas paintings refer to the tribal energy of Naga art in a highly Modern expressionist approach to colour and composition. His work is cheeky and cerebral as it bring together disparate cultural references such as the Naga bull-head motif and the mass culture Mickey Mouse head. “While searching for my Naga roots, I came across several carved images of bull heads in many Naga homes. I found it had an absurd resonance with the Mickey Mouse head, since both are triangular in shape. I wanted to have a bit of fun by counterposing these two together, because each one has its own cultural baggage separately while together they give me a third meaning of a hybrid culture,” says Chishi.

“You cannot put culture in a box and label it neatly. It is complex and messy” – Jimmy Chishi

Chishi first studied mass communication, but ended up studying visual arts at Jawaharlal Nehru University, Delhi, because he could no longer ignore his ‘calling’.

Another set of works by him are his Andhra Tolubommalata and Ravan Chhaya puppets that are larger than life. Each puppet is functional, even though it does not have rods attached to control its arms and legs. He has mounted them more in a manner that resembles mobile sculptures. His work in essence is about the assimilation of imagery from various cultures, which poses critical questions about how indigenous Naga culture is ‘consumed’. “I clubbed the Andhra puppets with the totemic carvings and geometric designs of Naga tribes. My idea behind these two works is that you cannot put culture in a box and label it neatly. It is complex and messy,” says Chishi.

Another artist from Kashmir who weaves in threads of conflict into his work is Ahmer Khan. An intentionally blurred photograph taken by him shows a child pelting stones at an unseen adversary. This image is a shocking yet poignant take on lost childhood. Children who live in conflict zones do not get to live out the cliché of an ‘innocent childhood’. Instead, they are hurtled into violence and often become hapless foot-soldiers and human shields.

Khan has also created a triptych that focuses on the eyes of three individuals. The first is of a bride viewing the world through hennaed hands with lovelorn eyes; the second is of a soldier wearing a visor, to focus only on his target. The third is of a young man whose eyes have been disfigured by pellet guns fired by the Army. “The curator [of ‘Contrabanned’] Myna [Mukherjee], chose these images since she wanted to show three different aspects of life in the Valley and tell the story from three different perspectives. Kashmir isn’t just known for violence—we have massive wedding celebrations as well, and many of us have grown up used to the vigilant gaze of the military,” says Khan.

“Initially, I didn’t want to cover conflict. But when it is in your own backyard, it’s hard to ignore” – Ahmer Khan

Like many boys in typical families, Khan was supposed to do engineering. Life had other plans for him, though. “I was always interested in photography and Kashmir landscapes really made me think I could do landscape photography. So, I started out with a mobile camera but with time everything changed. Today, I don’t know how to shoot landscapes…I shoot human life,” says the 25-year-old with a laugh.

He is currently in Cox’s Bazaar, capturing the plight of the Rohingya as they migrate from Burma to Bangladesh. He has also done a stint in Nepal where he photographed girls learning Kung Fu to defend themselves against sexual violence. But Khan does not make a distinction between documentary and art photography. He says, “Honestly, I don’t do art photography. I do documentary stuff and I really like to do long-term projects relating to human suffering and tragedy. Of course, I do positive projects as well, like the girls in Nepal,” he says.

Clearly, conflict plays an important role in his work. He says, “Initially, I didn’t want to cover conflict. But when it is in your own backyard, it’s hard to ignore. I see death and destruction a lot in Kashmir. Mentally, it’s hard. I get nightmares for a couple of days following a funeral or death. But I don’t cover only conflict, I travel to many places to cover stories and I really enjoy it,” says Khan, who is planning to do a Master’s degree in photography.

Syed Mujtaba Rizvi talks of the conflict in the Valley indirectly through popish bright canvases that hint at unrest over land and ideology. His works explore the idea of a hybrid identity and bear the influence of British contemporary conceptual artist Michael Craig-Martin, who taught Rizvi at Goldsmiths.

In the Name of God depicts a religious site through the motif of the prayer bell. In the Name of Development uses the builder’s setsquare and scale to signify construction, while In the Name of Gandhi uses the Mahatma’s glasses topped by a punk image of a skinhead with a crown. Together, these three images tell the story of Kashmir where religion and unrest often impinge on development and where Gandhi’s idea of peace and ahimsa has morphed into anti-establishmentarianism among the youth. “In the early days, I painted romanticised landscapes and people to express my angst,” says the 28-year-old. “However, my work is rooted in my immediate environment, which is fraught with conflict,” says Rizvi, who also founded Kashmir Art Quest and helped organise the Kashmir Biennale.

“My work is rooted in my immediate environment, which is fraught with conflict” – Syed Mujtaba Rizvi

While Art Quest, founded in 2009, was to showcase the works of over 200 artists from across the world, the Biennale was conceived as an international art event aiming to put Kashmir on the global art map. Unfortunately, both projects were scrapped and he expresses dismay at not being able to sustain an intellectually stimulating environment for the arts in the Valley. “We look for ways to circumvent this censure, but it is an uphill task,” says Rizvi, whose art is powerful without being polemical.

Artist Sumantra Sengupta takes a pedagogic approach to his art, bringing in history and wisdom of the traditional performing arts into his contemporary multimedia work. His struggle is to give voice to the disenfranchised and picks the soldiers who fought for the British in 1914 to do that. “The war was followed by the famine in Bengal, in 1943, which was a reality for Indians much more than a war being fought for a distant coloniser, and yet the famine was underplayed,” says Sengupta. He does not see the heroism and instead speaks of the vulnerability of the soldiers, many of whom were farmers.

He brings together the narrative of these soldiers and muslin weavers in his multimedia paintings titled Hahakar, since muslin was used to make bandages for soldiers. The symbolism, hence, comes to speak for various injustices. Sengupta says that Bengali artisans were often mutilated and their thumbs severed since the British wanted to retain control over the craft and distribution of fine cloth.

Furthermore, the weavers wove straight and horizontal lines in a performative manner. Sengupta incorporates that discipline in his works. He would work for hours at a stretch in the same shifts as mill workers in solidarity with their discipline. These works challenge modern art practice, he says. His paintings also feature Butoh dancers from Japan. It is a dance form that arose in 1959 and rejects rationality and depicts distress through the playful and the grotesque. In essence, Sengupta’s work collapses many centuries and time zones, disciplines and mediums, to speak against violence and war.