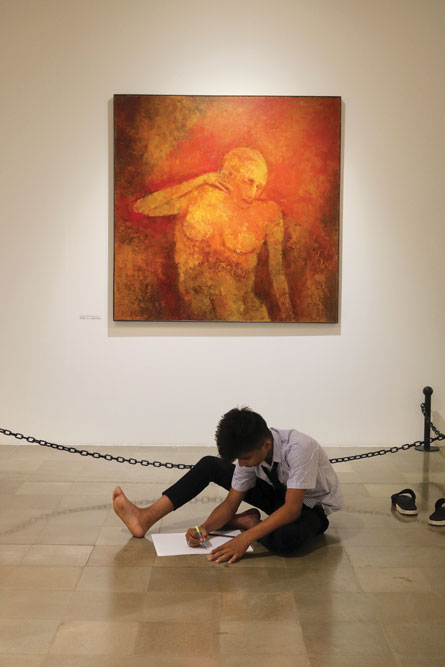 
MF HUSAIN HAS started speaking again. Ever the lean, silvery-haired presence brandishing his famed paintbrush, he’s being quizzed by children and young adults in a TED talk-style spotlight event. “What’s your favourite painting?” a bright young girl wants to know. How would he describe himself? “A painter who prefers to walk barefoot, a filmmaker with a difference and a lover of the most expensive cars on earth,” he replies. A rather simplified summary of the life of one of India’s greatest artists, it is still a good place to get to know Husain and his prodigious art. The Museum of Art & Photography (MAP) in Bengaluru along with Accenture Labs has created what they call the “Husain Experience”. Billed as ‘India’s first conversational digital persona’ of any artist, the Husain experience is designed as an interactive educational tool to attract youngsters to the world of Indian art and culture. MAP’s founder-trustee Abhishek Poddar tells Open, “Weaving in exciting and innovative technological experiences, such as creating Husain’s digital twin through AI, helps in changing the perception of art and museums in general for children.”

In Hyderabad, The Children’s Fine Art Gallery (CFAG) is hosting a worldwide children’s competition inspired by Husain’s peer, SH Raza’s works. Held in collaboration with the Raza Foundation to mark the late artist’s centenary, the online event will act as a primer for children to learn more about Raza and Indian modern art. “Raza’s philosophy was simple. He wanted to interpret nature in a minimalistic style, which he called geometric abstraction. Kids instinctively respond to his bindus, especially his colour schemes,” says Atika Amjad, founder and director of the CFAG.

Meanwhile, New Delhi’s Kiran Nadar Museum of Art (KNMA) has a busy summer ahead, with all kinds of art quests in the offing. Launched in 2010, the museum’s popularity with children has inspired affectionate monikers such as the “Haathiwala museum” (a reference to Bharti Kher’s fibreglass sculpture on its premises) and “Taj Mahal wala museum” (referring to Sudarshan Shetty’s installation composed of over 250 miniature Taj Mahals). The KNMA has actively worked towards getting children on board, with events ranging from traditional art workshops like painting (one of their exercises is based on legendary artist-scholar KG Subramanyan’s illustrated children’s books) and pottery to dance and film screenings. They even have a litfest for juniors. In May, Kolkata’s Emami Art had tied up with ThinkArts to host online art engagement sessions for 9 to 12-year-olds. Titled Of Horses and Birds, young minds were encouraged to create stories and drawings based on artist Kartick Chandra Pyne’s surrealist motifs. “We are motivated by the enthusiasm that the children have shown us and we plan to come up with many such sessions all year round,” promises Richa Agarwal, CEO, Emami Art.


Agarwal is not alone. Museums and galleries across India are upending conventions and reimagining a new playbook when it comes to art for children. No longer are museums dusty old places where adults go to have fun. Now, these most sacred of spaces where connoisseurs discuss art in erudite whispers are fast turning into creative playgrounds for children. This is being achieved through innovative programming and friendly workshops to engage the young. From field trips and summer art camps to nature trails and curated museum walks, curators, teachers and educators are reshaping learning, by emphasising interactive, hands-on and sensory experiences for young students. Opened to visitors only two years ago, the Children’s Museum at the Chhatrapati Shivaji Maharaj Vastu Sangrahalaya (CSMVS) has been a hit among schools, educational institutions and NGOs in Mumbai. It is a rare cultural oasis in a city starved of real estate. One of the founding principles of the Children’s Museum is to establish a sanctuary where the next generation can learn more than just art — but also empathy, compassion and a respect for nature.

Billed as ‘India’s first conversational digital persona’ of an artist, the Husain experience aims to attract youngsters to Indian art

“Children need to be encouraged and empowered to express themselves because they live such a confined existence, whether it is the experience of going to school or how they spend their time at home. Even if they are going to school, they do so on a school bus. There are multiple layers of protection, which is great. But what are you going to do about their creative and emotional growth given such regimented routines? Which is why there has to be a strong focus on art, as well as on appreciating nature and the values of coexistence to tell them that we live in a highly interdependent world,” argues Vaidehi Savnal, assistant curator, Children’s Museum.

The museum’s summer line-up is packed to the rafters. Hosted over Zoom and the learning app Enguru, children can opt for everything from Gond art to doodle workshops to tree trails to mythological storytelling.

Top museums boast a vast collection, all of which unfortunately can’t be displayed permanently. When organising extracurricular activities, it is not uncommon for them to dive into their own treasures. Children’s Museum, for example, works in sync with its parent body CSMVS to ensure there’s a certain consistency with the overall curatorial vision. Early last year, the Jehangir Nicholson Art Foundation at the CSMVS held a retrospective of Akbar Padamsee. For broader engagement, the CSMVS had invited children to reflect on Padamsee’s highbrow art, a combination of his signature metascapes and figurative experiments. Savnal says she was amazed at the ways in which children interpreted the blazing palette of the artist, who had passed away in January 2020, barely days before the opening. “We have been working for some time with a bunch of kids from Colaba Municipal School,” Savnal says. “We know how linear the education format of public schools can be. But without any training or prodding, we had them contemplate Padamsee’s paintings. The way they responded to his work was so fascinating and goes to show that art is inherent and belongs to everyone.”

At art workshops, curators prefer to avoid flooding children with too much information about art history, movements or even details like which phase a particular artwork belongs to in the artist’s oeuvre. “As it is, people are scared of art, why alienate them any further? The right thing to do is trust our children’s imagination and have them discover it on their own without any prior clues,” remarks Amjad of the CFAG.

For children themselves, like Samaya Apparasu from Sloka—The Hyderabad Waldorf School, art speaks a universal language. “Where words fail, often an image conveys so much,” she says, adding, “I want to be an architect, which I feel is another offshoot of art. I am happy that even after growing up, I will stay connected to art.”

The participants at the art room, Fort Kochi, were encouraged to explore natural mediums available in their living spaces. For instance, soil

MOST ART LOVERS are aware of the Kochi-Muziris Biennale that takes place every alternate year in December and continues for three months. Spread across an array of venues in Kerala’s commercial capital, the Biennale is a sought-after hunting ground for some of India’s and the world’s leading artists. One of its lesser known events, however, was the Children’s Biennale that was refashioned as Art by Children (ABC) in 2014. Later, in 2018, the ABC set up a project called the Art Room to cultivate a non-judgemental and non-competitive space for children to pursue their creativity. The Kochi-Muziris Biennale has set up the Art Room at the Cabral Yard in Fort Kochi, which serves as an ongoing site for visiting children and school groups. Blaise Joseph, programme manager at the ABC, estimates that they have clocked in over 8,000 visitors and 75 workshops in collaboration with at least seven schools from Thrissur and Ernakulam districts since last year. An art educator with more than a decade’s experience, Joseph joined the ABC a few months after the devastating Kerala floods of 2018. Children’s initiatives always struggle for sponsors. But the floods made it worse. The cash crunch sent Joseph and team to find more creative—not to mention, cheaper—ways to sustain. To compensate for a lack of art materials, the participants were encouraged to explore natural mediums available in the surroundings of their living spaces. For instance, soil. “It almost became like a research programme,” Joseph says, over a call from Kochi. “The children were really thrilled as they collected mud, soil, charcoal, ash, leaves, flowers and fruits from their school campus and courtyards of their house. They went on to find as many as 12 different shades of soil and 20 shades of colours from nature.” Even in the initial stages of the Art Room, “for a long time, we had to depend on natural elements for our art,” recalls the 45-year-old who has spent the last decade trying to reconnect children and adults to the joys of “living in harmony with nature through art-based workshops.”

Joseph adds, “The educational system as it exists in India today suppresses our creative impulses. Creativity is about thinking out of the box and taking risks, isn’t it?” Joseph intends to address this shortcoming, firstly by bringing children from different social backgrounds on an equal footing. He describes his method as “perspective building”. An ardent advocate for empathy and inclusivity in education, he says only when we abolish competitive classrooms can our children truly grow. “If I am accepted as a person with sufficient potential and so are you and there’s no comparison between us, then we can work and evolve together. Art is about finding connections and building relationships, with one’s self and with others,” he says, stressing on the need for building like-minded communities through art. Empathy, believes Joseph, is one of the first lessons of art. It lays the groundwork for everything else to follow.

The ongoing Covid-19 pandemic has been a period of uncertainty for schools and museums. More so for students who are growing up in a world bereft of personal touch. Since last year’s lockdown, a large piece of the art action has shifted online. And the museums have gone back to being spaces where silence reigns. Eventually, everyone recognises that online is the future. The pandemic has merely fast-tracked it. Savnal of the Children’s Museum calls the digital surge a “blessing in disguise”. She admits, “We have come to appreciate what the internet has done for us. We have been able to reach out so much more because of this proliferation of digital lives, especially to those who never before looked at museum-going from a cultural or educational perspective.”

Joseph, who has promoted the concept of bringing classrooms into nature—a variant of Rabindranath Tagore’s idea for Santiniketan—is still familiarising himself with apps and video platforms for Art Room’s ‘Learning at Home’ initiative, though only grudgingly. He says, “Nothing can replace physical workshops,” adding, “I personally believe that being with children face-to-face brings more humour, playfulness, togetherness and a sense of sharing and caring. But at the moment, it seems we are stuck with this.”