From Carnatic and Hindustani classical performances to religio-folk songs and fusion bands, it’s three days and nights dedicated to discovering the richness of Indian music. 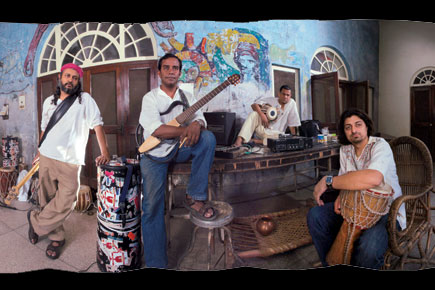 From Carnatic and Hindustani classical performances to religio-folk songs and fusion bands, it’s three days and nights dedicated to discovering the richness of Indian music.


This is one place where your unprotected ears won’t be assaulted by Himesh Reshammiya’s nasal notes. Or the chartbusting ‘Aal izz well’ accompanied by crude bottom-scratching. “Bollywood film music is the only thing we’ve banned,” says Shubha Mudgal about the upcoming Baajaa Gaajaa festival, which she has conceptualised along with percussionist Aneesh Pradhan.

In what seems to be a musically-playful and open-throated people’s party, that brings together ganewale, Tansens and kansens, Mudgal suggests you “come at 10 in the morning and leave at 10 at night”, to listen into the marginalised diversity of Indian music. Right from rarely heard religio-folk forms such as Gondhal from Maharashtra and Dasara Padagalu from Karnataka to qawaalis, classical Hindustani and Carnatic performances. There will also be pakhawaj and harmonium solos.

Everything will be playing loud and evocatively over three days and nights in Pune, from Friday the 5th through Sunday. Unlike the mandatory jugalbandi at most festivals, Baajaa Gaajaa’s highlight will be Shastroktra, which will have the venerables, Hindustani vocalist Rashid Khan and Carnatic vocalist M Krishna, explore dis-similarities between these musical spheres. “We’re likely to see an exploration of ragas borrowed from the South such as Saraswati, Kirwani and Hansadvani, in terms of their contrasts and compliments,” says Mudgal.

Beyond the performances are a series of seminars and film screenings, that’ll bring you face to face with rarely seen and heard musicologists and players, like Dr Ashok Ranade and Hiros Nagagawa from Japan. And no, you don’t have to leave the kids at home. There are workshops for pint-size Ustad wannabes. “They’ll be given books on about the tabla, as well as percussion shakers and instruments, specially developed for kids by Bhargava and Co (the leading Indian music instrument company),” says Mudgal. Be at this everything-you-won’t-get-on-the-iPod experience and imbibe all, especially the interactivity.