The actor traces his roots in conversation with Open 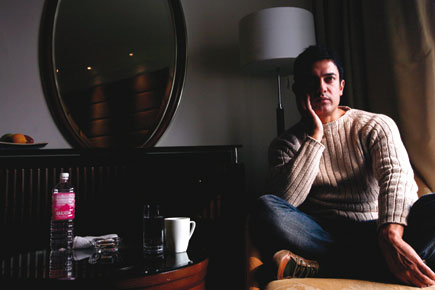 The actor traces his roots in conversation with Open


It is two days before the release of Aamir Khan Production’s latest film, Dhobi Ghat. We wait in the actor-producer’s office lobby, amid sparse white walls that have a few black-and-white photographs of the shooting of Lagaan. We want to ask Aamir if his an­cestors were Pathan. After an hour, Aamir Khan strides in. He has an uncharacteristically wild display of facial hair. He is wearing what seems like a designer kurta, a Pathan kurta of sorts. He has silver earrings on, and looks rather ethnic. The look, the regal stride, the gracious de­meanour—they seem to have pre-empted the question.

Q How is it that your name is Aamir Khan and your father’s name is Tahir Hussain?

A Actually, my father is Tahir Hussain Khan, and my uncle is Nasir Hussain Khan. They found the name too long. Three words are too long. So [they thought], ‘Let’s make it shorter [as a] screen name.’ When I became an actor, the same discussion came up. ‘Drop either Hussain or Khan.’

Aamir Khan felt better, sounded better. My full name is Mohammed Aamir Hussain Khan. A lot of Muslims keep Mohammed as a first name after the Prophet. My name is Aamir. Hussain is the surname. Khan is a tribe name or what, I don’t know. Khans are Pathans, I imag­ine. All of us are Pathans in terms of surname. I’m not born in Afghanistan and I don’t speak Pashto, though.

Q Are you related to Maulana Abul Kalam Azad?

A My grandmother was the Maulana’s niece.

Q Does your wife know that she studied at an institute started by your ancestors, Jamia Millia Islamia?

A Yeah, I’ve told my wife about it. We are all very proud of Maulana sahib. I’m sure every Indian is proud of him. My kids know about it too.

Q Do your children say Khan or ‘Khan’, the Urdu pronunciation?

A My kids say ‘Khan.’ As a kid when you grow up in an Urdu-speaking household, you pick it up. I can’t say Khan, it sounds very funny to me. The ‘kh’ is different from the ‘kh’ in khana.

Q Where are your parents from?

Q Have you ever been to your ancestral house?

A We have ancestral property in Shahabad, near Hardoi in Uttar Pradesh. I’ve never been there. My great grand­father owned mango orchards there. My father has five brothers and sisters. He and his brother passed away, and the others were keen to sell it. But I don’t want this land, which is my great grandfather’s land, to go outside the family. So I decided to buy it. I’ve never been there, but I want to go there.

Q Do you consider yourself Pathan?

A I’m actually a Mumbaikar totally. I don’t know what’s Pathan about me. The only Pathans I know are myself and my family, and that too because of the name.

Q Do you view the Khans in Bollywood as a community, in the loosest sense?

A No, I don’t. Not because I don’t look at Khans as a com­munity, but because I’m unable to look at anyone as a community. For me, everyone is a human being. I don’t feel ki yeh mere jaat ka hai, yeh mere biradari ka hai (he is of my caste, he is of my community). I feel ki yeh ek insaan hai (that he is a human). I value the person on the basis of what he or she is, and not what he or she represents.

Q Is it just a coincidence that the top three stars in Bollywood are Khans?

A I believe it is a coincidence. Just a coincidence. I don’t at­tribute it to anything more.
But Khans have come a long way in Hindi films since Independence. From changing names to now. From Dilip Kumar to the three Khans now.
Those were difficult times, and it’s difficult to comment on those times sitting 60 years away.

Q A new book states that most young MPs in India come from political dynasties. Dynastic politics is the only kind in India today. Do you think that holds true of Bollywood?

A No, it doesn’t. Over here, it doesn’t matter who you are, who you’re related to. If you don’t connect with an au­dience, you can’t last. Cinema isn’t like Indian politics. Cinema is a great leveller. That’s a harsh way of putting it. A better way of putting it is that there’s something in you that connects with the audience. It’s an intangi­ble thing that you can’t describe. Very often, even you don’t know that you have it. You don’t know what it is that people can connect with. I don’t know what people see in me which makes me [more than] what a good ac­tor is. There are so many good actors, but what is it that makes me connect with my audience?

The bottomline is that when an audience wants to see my film, it isn’t because of who I’m related to. If they don’t like me, they just won’t come into the theatre.

Q Is there something your family taught you that helped you understand the connection? Is it inherent or can it be learned?

Q When you went searching for your mother’s house in Banaras, was it an attempt to search for your roots?

A The trip was many things put together. The primary rea­son was to promote 3 Idiots. Instead of media interviews, I decided to get lost so the audience and media searches for me. It resonates with the story of two friends search­ing for Rancho, their lost friend. But as I was thinking more and more of this idea, I realised this can be much more. On a certain level, it can be an experience for me. I’ve never seen the country. And there’s no hope in hell I will see it so closely—because wherever I go, people rec­ognise me. My travelling in the country without special attention isn’t possible. It’s only possible in disguise. I was actually able to see the country. I travelled to UP—Banaras, Kanpur. Searching for roots was part of the jour­ney, which is why I went to Banaras. I was on the road for 14 to 18 hours…

On a second level, I was enriching my life. Taking part in people’s lives. I spent three hours in Telia Nala, the lo­cality of my mother’s house, with people, with no one tailing me. There was a friend who followed me with a video camera. We were going from place to place. For me it was a lifetime opportunity to sense, absorb and feel my country so closely.

On a third level, I wanted to use this journey to shed light on certain issues. [When] I go to a weaver’s house in Chanderi, MP, I get the problems faced by the weaver first-hand. And it comes on TV. The message I basically give out is: ‘Please use more and more handmade cloth because it’s a work of art, it isn’t just cloth.’ Going to school in Gujarat sheds light on education in rural India.

Q What are the issues playing on your mind right now?

A Malnutrition. I’m working on it.

Q In Dhobi Ghat, you have white hair. Is it natural?

A Part of it is. I started going white at 25. While my hair isn’t white entirely, it has flecks of grey in it. I thought that’s a good look for the film. So we enhanced it a bit.

Q Does it bother you, carrying off grey hair on screen?

Q Do you plan to visit your mango orchards in Shahabad sometime?