Musical Instruments: The Sound of Creation

A host of new musical instruments are born in India. A lowdown 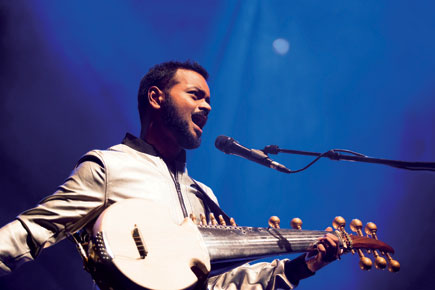 Karlheinz Stockhausen, the German avant garde composer considered ‘one of the great visionaries of 20th-century music’, once had a near- mystical dream of a man playing upon an old church door like a percussionist to gain entry to the great darkness beyond. With his incessant raps on the large wooden double door, he finally gets it open. As he vanishes upon entering the place, a symphony of metallic instruments erupts, followed by the wail of a siren. Soon, a little girl from the audience ascends the stage and passes through the mysterious door, leaving behind a lingering sense of her disappearance in between the receding sounds of the siren and the metallic orchestra. This cryptic dream inspired the maverick Stockhausen to create a whole new instrument resembling that strange double door. The wood of acacia, alder, oak, ash, walnut and wenge combined to form what the composer called Himmels-Tür or ‘Heaven’s Door’. The instrument made its first appearance on 13 June 2006 at Rossini Theatre in Italy—in a not-so-frequent instance of an eminent composer regaling an audience with a spectacular double bill: a brand new composition with a new music instrument.

They may not have lofty stories of being inspired by mystical dreams, but several musicians in India too have gone on to create new instruments in their bid to sculpt new sounds—attaining a sharper resonance and stage presence.

The natural hollow of bamboo has made the plant highly amenable to musical improvisation—the most ubiquitous manifestation of which has been the flute, represented in Indian culture by the popular image of Lord Krishna with his bansuri. Musicians down the ages have relentlessly sought to repurpose this unique plant of immense economic and cultural value to elicit a bewildering range of sound effects. Currently, one such music band in the country uses all its instruments made entirely out of bamboo in an effort to revive and preserve the folk songs of Kerala. The Bamboo Folks, a four-year-old band from Arangottukara in the Thrissur district of Kerala, has given close to 250 performances as India’s only symphony orchestra of bamboo instruments. Of the 14 instruments it uses, two are entirely created from scratch by band members. One is the thambore, which has five logs of bamboo varying in length and size. It has an open pipe with one of its side sealed with cattle skin. The second is the short drum made out of belathy bamboo and is used for the sharp base note. The endangered folk songs from the shores of the Bharathappuzha form the core of the repertoire of Bamboo Folks and is relayed in enchanting instrumental scores, recalling the rustic simplicity of a time when man lived in close harmony with nature.

Their newly created instruments are slowly gaining wider applications. “More and more people are calling us and asking for the instruments. We are also on a mission to explore the potential of music instruments for special kids,” says Vinod Nambiar, executive director of Bamboo Folks’ parent NGO, Vayali Folklore Group. Inspired by the Japanese bamboo orchestra Rakutakedan in 2007, Bamboo Folks has had several collaborations with the former.

Bamboo has also helped shape location-specific instruments to reinforce cultural identity. The fiery folk fusion band from Nagaland, Abiogenesis, is a trailblazer in its own right. Not only have its members invented a new genre of music called Howey, which seamlessly blends Naga folk tunes with modern genres of Western music, but one of its members, Moa Subong, is credited with creating a new wind instrument called bamhum. This thick flute-like instrument has a circular hole to hum into and its range has dramatically altered the soundscape of the band’s music, lending a soaring, undying spirit to indigenous, tribal melodies. The bamhum was officially unveiled in May 2005 by the then Governor of Meghalaya and was declared one of six important new innovations by the Technology Information, Forecasting and Assessment Council (TIFAC) in 2013. Having received a number of awards and nominations for their passionate rendering of hoary, age-old tunes, Abiogenesis also scored a nomination in the Contemporary World Music Category at the 50th Grammy Awards.

When it comes to actually securing a Grammy, Hindustani classical music instrumentalist Pandit Vishwa Mohan Bhatt needs a mandatory mention. He won the 1993 Grammy Award for Best World Music Album along with Ry Cooder for their album A Meeting by the River—the second Indian to win the most prestigious music award in the world after Ravi Shankar. And he can justly attribute his stellar success as a musician to the Mohan veena, which he created back in the late 1960s. By adding 14 more strings to the regular Western Hawaiian guitar, he assimilated techniques of the sarod, sitar and the veena into an ingenious whole. “When I was around 17, I saw a German woman arrive with a Hawaiian guitar to take lessons in Indian classical music. I was of an experimental nature and I wanted to get more out of the existing classical instruments… I wanted the notes of the sitar, sarod, veena and sarangi to come together in one instrument,” recalls Bhatt. So when the German lady was about to leave, he convinced her to sell her instrument for Rs 25 and began work on what would soon become a physical extension of his very identity as a musician. Undeterred by snide remarks like, “Yeh toh guitar lagta hai” and disapproving reactions for tampering with an illustrious tradition of musical craftsmanship, a 20-year-old Bhatt had a finished model ready in 1970 and gave his first performance in Mumbai with the Mohan veena. The instrument today is an integral part of the pantheon of Indian classical instruments, with many noted musicians devoted to excelling in it.

Dr Suvarnalata Rao is a well- known musicologist and heads the Indian music programming department at the National Centre for Performing Arts (NCPA) in Mumbai. According to Rao, it would be misleading to regard electrical and other technical revamps of existing instruments as new creations. “In the recent past, no particular instrument from India qualifies as being radically new,” in her view, “Most of them are simply modifications and adaptations and marketing gimmicks.” Her idea of something truly innovative is refreshingly different. She sees a musician’s constant search for ways to express new tunes and timbres as the only driving force for change, and in that respect what Pandit Shivkumar Sharma did to a folk instrument like the santoor and how Brij Bhushan Kabra adapted the guitar to play ragas have proven to be much more significant in the modern evolution of Indian classical music than the creation of any new instrument.

With that perspective, it is easy to identify many contemporary Indian classical musicians who are extending the possibilities of what traditional instruments can achieve with some tweaks. While the Mohan veena was a Hawaiian guitar remodelled into an Indian classical instrument, British Indian composer Soumik Datta has lent a modern, more urbane touch to the solemn and weighty sarod.

Having trained in Hindustani classical music from the legendary sarod maestro Pandit Buddhadev Das Gupta, Datta has traversed quite a distance in evolving his music language from hard-boiled classical to a shade of metropolitan cool—all thanks to an electro-acoustic version of his sarod. His latest album Anti-Hero has been reviewed as ‘cinematic and explores a fertile area somewhere between Radiohead, Pink Floyd and Indian classical music’. His training in the traditional discipline of Indian classical music, along with extensive exposure to contemporary composition and music-making in London, has led him through an exciting journey of cross pollination via the sarod.

“The reason I tampered with the sarod at all was [that] I wanted to create new tones and different sonic textures,” says Datta. “If you hear the album Anti-Hero, which is evidence of all my research on modifying the sarod, you will find that there are literally new sounds coming out of the sarod. You wouldn’t guess it’s the sarod—you’d think there are other instruments like the keyboard,” adds Datta, who has toured extensively and collaborated with musicians like Beyonce, Jay-Z, Bill Bailey, Nitin Sawhney, Anoushka Shankar, Talvin Singh, Joss Stone, Javed Akhtar and Shankar Mahadevan. He collaborated with the London Philharmonic Orchestra to lend a surreal Indo-Western twist to Satyajit Ray’s cult classic Goopy Gyne Bagha Byne at the Alchemy Festival in London this May, sporting his sarod like a guitar.

Another Indian classical musician to have added an electric zing to the sitar is Niladri Kumar. Born to sitar player Kartick Kumar who was part of most Laxmikant-Pyarelal compositions, Niladri was also deeply influenced by the music he heard outside the confines of his house—like The Beatles and Michael Jackson. “Sometimes, necessity is the mother of invention. I wanted to be heard and I wanted to connect to a whole new generation, in a way in which they could easily relate to,” he says of why he created the zitar.

The yearning for new sounds is universal, and that’s reason enough to expect even newer instruments.