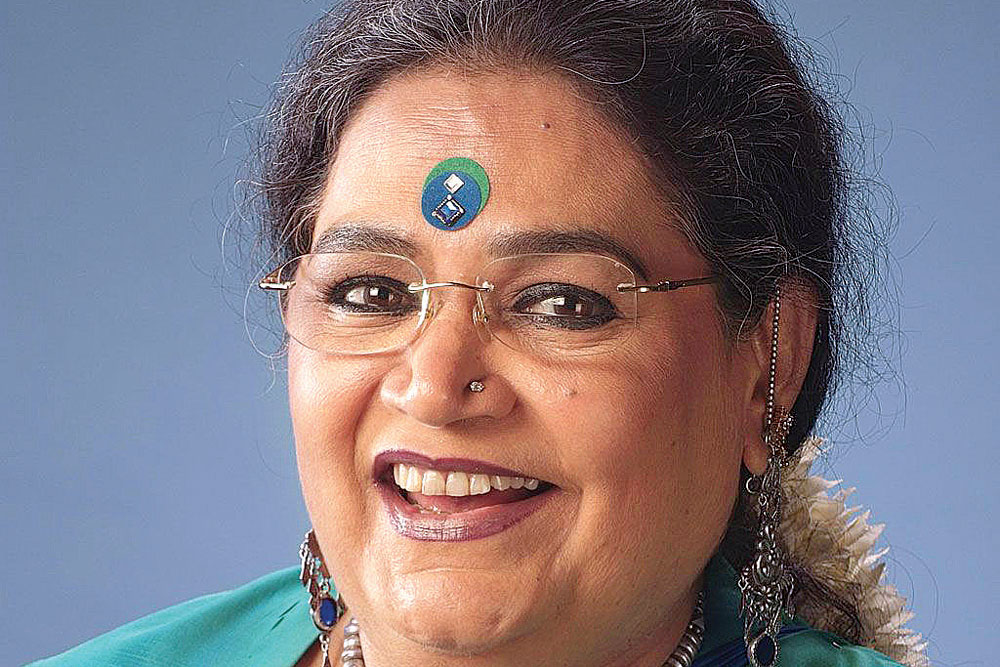 
HER VOICE BOOMS across the room, reaching the furthest corners with ease; it washes over everyone with a warmth seldom found even in seasoned stage singers. She can make everyone feel seen, even in the largest of audiences—the sheer joy that she takes in performing pulls everyone in with its irresistible magnetism. It’s a talent that cannot be replicated: an intuitive ability to make everyone in the room groove to the rich contralto of her vocals and sing their hearts out.

This is the experience of attending a concert by Usha Uthup. Despite originally being a ‘Madrasi’ who was born and brought up in Mumbai and married to a man whose family is based in Kochi, Uthup has long been claimed by Kolkatans as one of our own. The attitude may seem confusing—after all, why would a city love an artist so much that her very name is embedded in its culture, even when she’s not originally from there? But Uthup has 50 years of proof that she belongs to Kolkata, and that Kolkata belongs to her, for intertwined with her story is the tale of another icon of Kolkata: the venerable Park Street establishment, Trincas.

Trincas has existed for 60 years in its present form: a diner and a live-music venue. Fifty years ago, on October 1st, 1969, the long journey of Uthup’s career began at Trincas, where she became a phenomenon in a very short time, owing to her deep, husky voice, her choice of singing in English and her unusual outfit of a Kanjeevaram sari, with flowers in her hair. The singer observed the golden jubilee of her career with a series of concerts in Kolkata this September, at Trincas, and it was a double celebration, since Trincas, too, is marking 60 years of existence.

I speak to Sunny Puri, the son of one of Trincas original co-owners, Om Prakash Puri. In 1959, Om Prakash Puri and his partner, Ellis Joshua, took over a quiet tearoom called Trincas and transformed it into a place where patrons could enjoy continental, Indian and fusion fare while watching the many variety shows put up by the establishment.

“We converted it in 1961, after taking over in 1959,” says Puri, speaking of the initial period of that transformation, “At first, when it was owned by a Mr Trinca, it was a tearoom and a bakery. Around that time, other places with similar concepts—dinner and live shows— were coming up all around the country—Mocambo, Blue Frog, Magnolia—and my father and his partner had both been with the Oberois for more than a decade each. They had the experience, the knowledge and the exposure to turn the place into an entertainment hotspot.”

And so they did. Over the next two years, they acquired the required permissions and voila, Trincas was born. The place became known for providing performers of all kinds, especially bands and cabaret singers from many parts of India, a platform to test out their shows in front of a live audience. The momentum soon built up and Trincas became identified as one of the most familiar places in Kolkata, with the biggest draw being its variety performances. This is where Uthup began.

“I belong to this place and Trincas belongs to me,” says Uthup. She moved to Kolkata permanently in 1977, but she began performing at Trincas in 1969, when she was just shy of 22 and was belting out renditions of Western songs in her powerful voice: jazz, pop, folk, rock and everything in between.

“Mr Puri and Uncle Josh [Ellis Joshua] heard of me through word of mouth and came to see me at the Ritz hotel in Mumbai, and soon afterwards, Uncle Josh wrote a letter and asked me to come sing here,” recalls the artist. She was singing at the Nine Gems in Chennai at the time and she wrote back saying she would love to, but that she didn’t “know how to wear a frock”. “And he said, ‘No, no, we just love you the way you are—come in your sari!’”
Due to the reputation that cabarets had gained in Kolkata at the time, being thought of as places of decadence, Trincas was termed a ‘nightclub’ and frequented by men more than women. If one wanted to sing there, they had to go to the police headquarters at Lal Bazaar to sign a contract stating, ‘You could not solicit men or sit with any other customers.’


The women in the audience became my best friends – with a body and a face like mine, they felt that I was never a danger to their husbands

Soon after Uthup’s arrival, however, the audience changed completely and it became more of a family place: “The women in the audience became my best friends—with a body and a face like mine, they felt that I was never a danger to their husbands!”

The shows, performed in both English and Hindi, were scheduled around other events on Park Street, with three sessions being held during the day: the tea session, the pre-cinema session and a late-night post-cinema session. The evening shows at the theatre would start at 8.30 and before people went there, they would drop in at Trincas and then return later for dinner and music after the film was over. There were also all-day-music Sundays, on which informal jam sessions started just after brunch and artists like Uthup not only performed but also explored and experimented onstage and often invited audience members to join in.

“This is where I learnt everything: how to coordinate with all the musicians in a band; how to work a room; how to perform with no stereo and just one speaker and one amplifier; how to nip across the street to Shivani’s or Harmony House or run down to Chandni [Chowk] if we were a cable short,” recalls the singer.

It was, no doubt, a steep learning curve: one incident that remains fresh in Uthup’s mind was when she sang her favourite closing number, Hava Nageela, in front of a row of Middle Eastern diplomats and was immediately sent a chit from Joshua that read, “We think you should change this song very fast!”

Uthup entertained a galaxy of stars at the eatery. Amitabh Bachchan and Kabir Bedi dropped by. Sharmila Tagore and Tiger Pataudi had a regular corner stall, and Bengali actors Uttam Kumar and Supriya Devi had their own favourite seats next to the pillar. Satyajit Ray frequented the place, as did politicians like Somnath Chatterjee and Jyoti Basu. There was more eccentric clientele as well: Uthup recalls a man called Sultan, who would order only a cup of tea and nurse it for the rest of the evening, sitting in a corner stall and enjoy the music. “We even had an obituary for him when someone said that he’d passed away and then of course he came in and sat down the next day!” she says with a smile.

Perhaps this is why Anand Puri, Sunny’s son, says, “Kolkata is a city of quirkiness and charm. You find quiet little nooks here that you can call your own, where the steward has been there for 40 years and can immediately make you feel comfortable.” He’s referring to people such as Jammu native Vishnu Mishra, who joined Trincas in 1975 as a manager when he was 24 years old. He has retired now, but still prefers to come back to his job. Anand calls him ‘Uncle’. It’s hardly surprising, then, that one of Uthup’s favourite memories at Trincas is singing Auld Lang Syne and its Bengali version, Rabindranath Tagore’s Purano Shei Diner Kotha, on a New Year’s Eve with a guitar, with the entire audience singing along.

Now, Anand is trying to bring back the authentic ’60s aura that made Trincas stand out. Over the years, the restaurant has been divided into several rooms: the main hall, two bars called The Other Room and The Tavern and a Chinese cuisine section added in the ’80s, called The Ming Room. “I want to restore much of the original decor from the 1960s,” he tells me, when on one afternoon we sit down in the restaurant to talk, with the clink of knives on plates and the thrum of live performances in the background. “The plush red velvet backdrop to the stage, the red velvet curtains and valances over the windows, the little lamps on the tables and the chandelier, which has been there since the restaurant opened, are all back.”

Trincas is where I learnt everything: how to coordinate with all the musicians in a band; how to work a room; how to perform with no stereo and just one speaker and one amplifier

Anand has also put out a call on social media to invite people to come and tell their stories about Trincas, with a photograph or two if available. He has already received interesting responses, such as ones about the legendary producer Biddu Appaiah, who performed at the restaurant under the name Lone Trojan, and a band called The Cavaliers that played in the eatery in the ’60s and the ’70s. The collection of anecdotes and photos, arranged chronologically, is scheduled to go live on the restaurant’s website, still under construction. His attempted reconstruction of the restaurant is thus both physical and mnemonic. “It’s a massive archiving effort, an effort to rebuild the history of the place and to contextualise its present,” he says.

He is also restarting several old traditions, including the Sunday afternoon informal jam sessions and weekend quiz. The latter will be hosted monthly by quizmaster Dhruv Mookerji as part of a series of ‘legacy quizzes’ on themes close to Trincas, like music, food and Kolkata. “Trincas is from an era before discotheques and nightclubs, and it provided all of these great ways to relax and socialise on a weekend,” says Puri. “We want to bring that human connection back.”

This melding of the old and the new is young Kolkata’s favourite new way of recovering and rediscovering the heritage of their city. There is a sense of renewal and regeneration, as a new generation of entrepreneurs in the city, like Puri, has decided to build a future that is constructed with the help of the past. This is the ‘renaissance’ that both Puri and Uthup (who calls herself a fatal optimist) have begun to experience in the city, and it often consists of a tendency to look back at Kolkata’s past as a cosmopolitan melting pot and bring that back. The Park Street scene itself is undergoing this transformation, and Trincas is right at the heart of it.

As Uthup says, “In the midst of all the dreary news we hear every day, about people fighting on the basis of religion, caste, colour, creed—none of which ever made any difference to us at Trincas—the idea that people are coming to celebrate an evening of good music and good food and togetherness gives me so much happiness.” Anand seems to echo her when he tells me, “This place has helped to create good memories for so many people for more than 60 years, reflecting the best of Calcutta. We can only hope to maintain that legacy for a long, long time.”