To Gig or Not to Gig

The dilemma of choosing between the live and the recorded 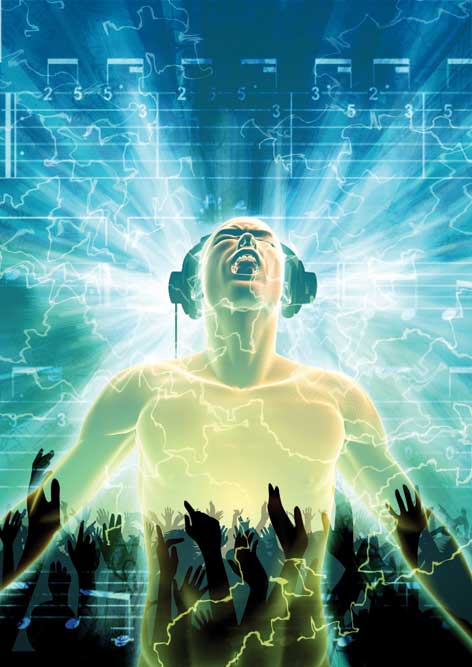 WHEN SOMETHING I’M listening to is really powerful—when that realisation hits that this music is going to stay with me for a long time—I get a distinct feeling of upheaval. It begins in my torso, as if I’m about to vomit orchids. And then it travels, like hot mist, towards the back of my neck. Where a slight flutter resonates absently. Then come the goosebumps—though they’re not absolutely essential. Some people start crying because it’s so overwhelming. It’s a moment or two of complete blankness (the good kind). While ‘spirituality’ in the real world remains debatable, there’s no doubt that listening to music is a profound physical experience.

I’ve had hundreds—maybe thousands— of such epiphanies through the years, most of them while locked away somewhere inside my home. Earphones jammed deep into my ears. Waiting, drooling, for these quick-fire flashes of pure joy. For so, so many others, that moment—that exact feeling—presents itself in a live setting. At a concert, or an intimate gig, or a recital, or whichever setting where a musician performs in real time and people gather around and listen. The live experience, while in no way the same as sitting alone in the dark shovelling music into your brain at will, is just as equal, just as powerful.

It’s no more than a Sophie’s Choice- styled thought experiment, but I’d pick the former. If I really had to choose, I’d much rather spend a lifetime just listening to recorded albums and songs alone, even if it meant having to sacrifice the live experience altogether. I think.

This isn’t an audiophile argument. The apparatus used to listen to the music matters, of course, but it doesn’t necessarily have to be of top-notch quality. My greatest memories involve going to school as a 15-year-old and exchanging one rackety old cassette with another that a kid there has. Rushing home, locking myself up in my parents’ room with their 2-in-1—known in those days as a ‘deck’—and reading the liner notes of the album while it plays. Or, maybe, dunking the tape into a Walkman—I eventually progressed to a Discman— and blocking out all worldly sounds. Today, it could just as easily be an album that my streaming algorithm spits out accidentally. Or listening to a vinyl record on a gramophone.

Fidelity does play a role in determining how you experience music, but it’s a deeply personal equation. I use mid- range earphones these days, which, for me, can have as great an impact as high- end studio-quality speakers. In essence, there’s no ‘right’ way to listen to music.

What matters is the connection. The listener is surrounded by technology and devices she’s comfortable with. I can listen to music in precisely the ways I think will maximise its impact. I can turn off the lights, select my own ‘mood lighting’. Sometimes I’ll play chess on my phone. It’s a controlled process. And the control that I get to exercise over external factors helps, oddly, as a means to surrender that same sense of control to the music itself.

If I really had to choose, I’d much rather spend a lifetime just listening to recorded albums and songs alone, even if it meant having to sacrifice the life experience altogether

Live music, on the other hand, is ultimately defined by variables outside the listener’s control. It is chaotic by design (which isn’t necessarily a bad thing, but can be). What if the entry charge is too high, and I spend the entire gig dealing with buyer’s remorse? What if the band I’ve come to watch decides to get really stoned right before they get on stage, and they spend the next 40 minutes giggling while tuning their guitars (unsuccessfully)?

Often, you’ll find yourself stuck behind a really tall guy who refuses to stand still. You can’t see the artist play, so you have to imagine what he might look like (I’m average height, but I greatly empathise with short people on this). Then there are the incessant clickers, the amateur photo and videographers who refuse to experience a band without the comfort blanket of their phone screens, choosing to record memories instead of experiencing them. This year, when American alt-rock band Incubus performed at a festival in Pune, I had to suffer the antics of a particularly randy couple as the band switched to a slow ballad. Between people in the crowd making out and blocking my view or just having them sing along loudly to a song I’d rather hear just the band sing, I can’t tell which is worse.

Which isn’t to say that listening to recorded music doesn’t come with its own set of concerns. For instance, my old laptop used to occasionally stutter if I ever made the mistake of playing high- fidelity audio on it. Nothing beyond an MP3 would work well—a FLAC file would send my motherboard into convulsions. So I had to work around it. (Or buy a new laptop.) CD players had this annoying habit of sputtering if the CD was dirty. YouTube will often throw in an infuriating 10-second ad in the middle of a song. Sometimes I’ll get a phone call just as I’m having a moment. These are all legitimate gripes. But these quirks, the internal dynamics of one’s environment and devices, remain familiar.

Coming back to the live world, there’s also the classic Indian-gig problem: the damn sound. Without speculating on whether it’s the fault of the performer, the sound system, an incompetent sound engineer, poor acoustics at the venue, or a mix of all of the above, so many gigs in this country—especially those held on a smaller scale—are ruined by terrible live sound.

It gets worse for people who self- identify as introverts (such as this writer), who’re forced to be part of a crowd when they’d really rather not. But regardless of one’s position on the Myers-Briggs Type Indicator, huddled in a crowd of hundreds of sweaty people is never fun. Oh, and the absolute worst is that group of people who will chat loudly whenever a quiet song is played on stage.

With recorded music at home, it can work slightly differently: One’s intellectual and emotional processes often operate in tandem. One ends up informing the other

However—and this is a big however—I should concede that none of these counts when a gig is really good. It’s the same factors, and about a thousand more, that often make live music so memorable. Think of the unpredictability, the uniqueness of each performance, the frightening volatility of a gig. The joy of listening to an artist as part of a community of like-minded souls who’re there for exactly the same reason is magical. There’s an almost palpable aspect to it, a chemistry being formed in real time between the artist and the crowd. But it’s mostly intangible. The kind of communion that is forged here is perhaps impossible to match.

There’s a reason why people have bucket lists filled with their favourite artists; and why deaths of famous musicians are followed by dejected fans lamenting their own luck that they’ll never get to watch the artist live.

Of course, listening to music is a fragile, reactive, emotive response predicated on factors that language doesn’t quite have words for yet. For all its temptations, I’m willing to sacrifice live music. In a setting of my choice, listening to music I’ve picked fussily, I get to experience a kind of happiness that’s mine alone. In isolation, I find it far easier to submit. It’s a deeply personal bond being formed between me—and the experiences that shape my personality— with the music. There’s time to gather my thoughts, to understand the motivations of not just the music but also my own. I find it a more direct form of communication between the artist and the listener.

The loudness, the physicality, the craft of the artists during live music can affect the listener in a way that she can’t help but give in and have a great time. Or the reverse: something can seem just too challenging—or poorly presented—to truly appreciate in that moment.

With recorded music at home, it can work slightly differently: one’s intellectual and emotional processes often operate in tandem. One ends up informing the other. I can be moved physically and emotionally by the music, of course, but I also get the space to absorb it. There’s more space, more time to scrutinise the secondary elements of listening to great music: the why of it. What is it about the music that’s so moving (or not at all)?

And this allows for one of the greatest joys that any Very Serious and Self-Important Music Listener can experience: the process of ripping apart a work you enjoy, analysing it from all angles, dismantling and reassembling the intent and execution of a song, understanding the finer mechanics of it, and really just nerding out. It all leads to that one very short-lived moment where it all comes together and you get the distinct sense that you’re about to burst.

The dilemma between choosing live and recorded music becomes even more tortuous—and torturous too—when you take into account the motivations or preferences of the artist. Which would a musician prefer? Would she rather have people listen endlessly and obsessively to her album, or would she prefer playing to packed crowds at every gig of hers? What about musicians who existed in an era when recorded music didn’t even exist, whose written works were performed and recorded much after their lives? What about good old stage fright?

Then there’s the fact that most mid-level artists today make their money through touring and not album sales. How would they pick?

It is a difficult choice. What always stays constant, though, is the enormous power of that one short moment. And I prefer to enjoy it in the solitude of my drawing room.