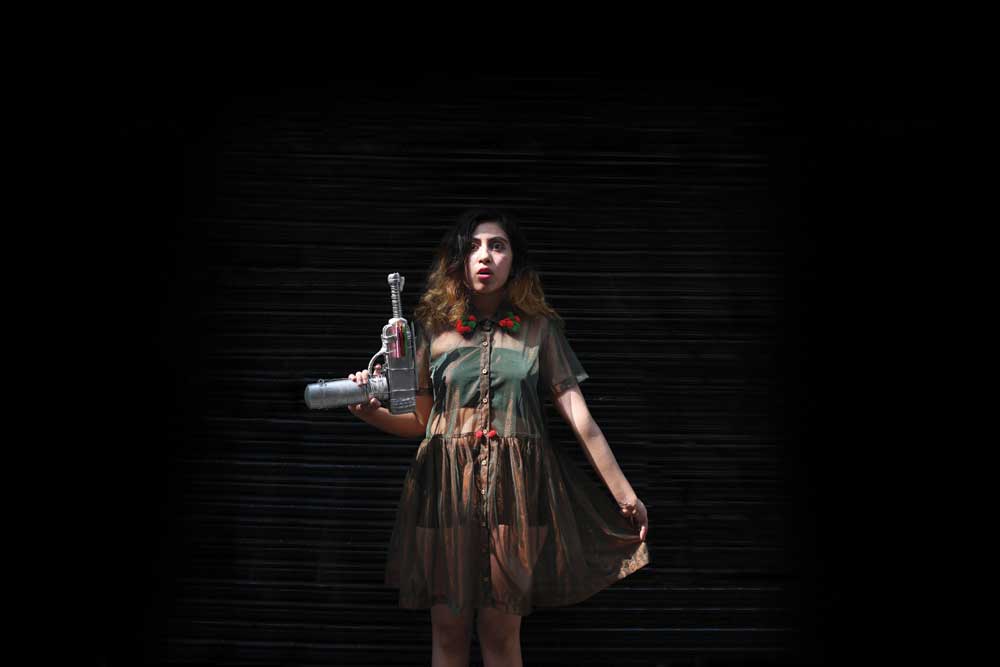 TARANA MARWAH remembers having a decisive conversation with her father when they’d gone out for a long walk many years ago. They were talking about music. “He was like, ‘If this is something you want to do, you have to start taking it seriously now’,” she recalls. “I was seven.” Her father, who plays the harmonium and tabla, had introduced her to classic rock and old Bollywood music early on, instilling a musical curiosity in her. Growing up in Canada, Marwah began learning the keyboard, and is a classically trained player. She moved to Delhi aged 12, after which she learnt jazz, before discovering the joys of electronic music in college. Twenty-three now, Marwah, who writes and performs as Komorebi, is all set to release her debut full-length album Soliloquy, later this year.

At Chocolateria San Churro, in a forever-crowded south Delhi market, Marwah orders a portion of churros. They’re the reason she was keen on meeting at this cafe, she confesses. She orders another plate for takeaway. Marwah, who has blonde hair tips and is clad in a green floral dress, takes out her laptop as she discusses Soliloquy excitedly.

For good reason too. She has outlined an elaborate plan for its release, spanning multiple disciplines of art. There’s the eight songs to begin with, of course, but complementing her musical vision will be a combination of art and fashion, all revolving around the theme of ‘Candyland’. Late last year, once the recording process had finished, Marwah decided to expand on the idea of the record. “I thought, ‘What can you do right now that’s different from what you’ve done in the past? ’ You have to evolve; you can’t stay in one place. So I thought of adding different elements of art. I thought maybe I could enhance the viewer’s perception through that,” she says.

A technicolour inlay—a nod to Alice in Wonderland—and album cover, designed by Siddhant Agarwal, maps out the concept. Marwah’s working out visuals and gigs for the Candyland tour. She performs live with drummer Suyash Gabriel, and plans to expand the scope of their live performance. She is also working with her friend Pakhi Sen, an entrepreneur and artist, for theme- based outfits to accompany the album. There’s going to be a grand photo shoot once the fashion line is ready, and she’s also planning to wear the clothes at the gigs. The two have been roaming around town sourcing materials. “I told her I’m looking for a sort of Alice-in-Wonderland- meets-Grimes-meets-Japan-meets-Korea. That highly accentuated… you know, it’s magenta, it’s in your face,” she says. “If you’re trying to build a personality on stage, if you want people to relate to it, to like it—or dislike it, whatever it is— you have to be something. You have to have an identity. I’m trying to create this world, where the person who’s listening can sort of be here, with me.”

So while the concept driving Soliloquy is entirely Marwah’s, she has collaborated with artists who can enhance her vision. The songs feature performances by bass prodigy Mohini Dey and guitar virtuoso Warren Mendonsa (aka Blackstratblues). Marwah wrote the music, produced it on her own, and has sung and performed on the album. She recorded at Cotton Press Studio in Mumbai, working closely with Rohan Ramanna, who has mixed the album.

“If you’re trying to build a personality on stage, if you want people to relate to it, to like it—or dislike it, whatever it is— you have to be something. You have to have an identity” – Tarana Marwah

Working at a big studio allowed her to explore several creative directions. Her self-titled EP, from 2015, was produced entirely at home, on her bed. For Soliloquy, though, she decided on a more ambitious recording process, using the advantages a big studio setup provides. “I learnt a lot about production, just by watching [Ramanna] work. I like to find innovative ways of looking at the same piece of work,” she says.

Thematically, Komorebi is perhaps part of a particular cluster of artists that have been gaining prominence in India over the past few years, all self-producing off-beat, downtempo electronica. The music in itself resists conventional categorisation—it might owe some allegiance to EDM, but it’s not nearly dancey or uptempo enough to slither into that specific type. And while there’s a heavy live element to the sound often, it’s still not in the same space—in terms of energy—as live rock ‘n’ roll. Really, this downtempto scene exists somewhere between the lines, and under the radar.

While Marwah’s previous release had a strong emphasis on textures and rich soundscapes—with gentle plucks and pads lending the songs an airy feel—here, she has gone for a slightly more structured approach to writing ‘songs’. The odd departures into weird spaces remain, showcasing her skills as a songwriter willing to explore sonically challenging passages, but she believes there’s a more cohesive identity to the music on Soliloquy . She doesn’t identify as a singer-songwriter, given her pedigree as a keyboard player and forays into production and composing via DAWs on her laptop.

Yet there’s a far greater focus on the voice and the lyrics on Soliloquy, a more ‘commercial’ bent. She’s singing about her life, her family—the opener, Little One, is addressed to her younger brother—her friends, her relationships, and there’s an inward (at times self- critical) gaze directing the songs. “It’s everything that’s ever happened to me,” she says. “It’s also self-indulgent. But then a lot of these are relatable issues and problems. And everything is happening in ‘Candyland’, this magical realm.”

While talking about how the music of Björk, Imogen Heap, and Grimes has shaped her creative instincts, Marwah brings up gendered tropes that sadly still exist in the music business. “I feel like a lot of times, for some commercial gigs or otherwise, people have said, ‘You should make an effort to look a certain way, dress a certain way.’ Be ‘feminine’.” She understands the need to have a ‘brand’, a musical identity that exists not just inside the songs but on stage—as a performer—but she has a problem with the imposition of strict, outdated labels.

Marwah obsesses over her craft, and has a roving curiosity. In addition to Komorebi, she’s also a part of Delhi’s experimental outfit Tankbund and River, while her most recent musical output was a song she worked on with Gaurav Raina (aka Grain, one half of MIDIval Punditz), called Dream, where she contributed vocals and was part of the production. She collaborates often with Raina, whom she cites as a mentor of sorts.

“I’m all about meeting people who’ve been around, who know what they’re doing, so I can learn and build a path for myself,” she says. Marwah speaks with a lot of enthusiasm, wandering off on stream-of-consciousness musings mid-sentence — “I tend to babble,” she laughs — but at the heart of it lies a fascination for her craft.

She tells me how she often struggles with a lack of structure as a full-time musician. “I try to be proactive. But I don’t have a nine-to-five, or a boss telling me what to do. But it’s also part of your success, where you can constantly wake up with energy every day.” Self-belief plays a strong role in her identity as a musician, and she offers a welcome note of positivity in an indie music industry that’s mostly filled with pessimism: “I believe in it, that’s why I’m doing this. When you do something right, you get a response.”

And then there’s her running obsession with Japan. Ever since she can remember, she’s been fascinated by the culture: “I’m nuts about it,” she says. Their food, their art, the anime, the music, style, she loves all of it, and it’s a constant motif in her music as Komorebi (the word itself means a nostalgic longing for a person or place in Japanese). She’s never visited the country, but knows it well. “If shit doesn’t work out here, I’m going to go to Japan. I will cut off from everyone I know in this country, go to Japan, and score videogames and meet people there. That’s my life!”