Death of the Rock God 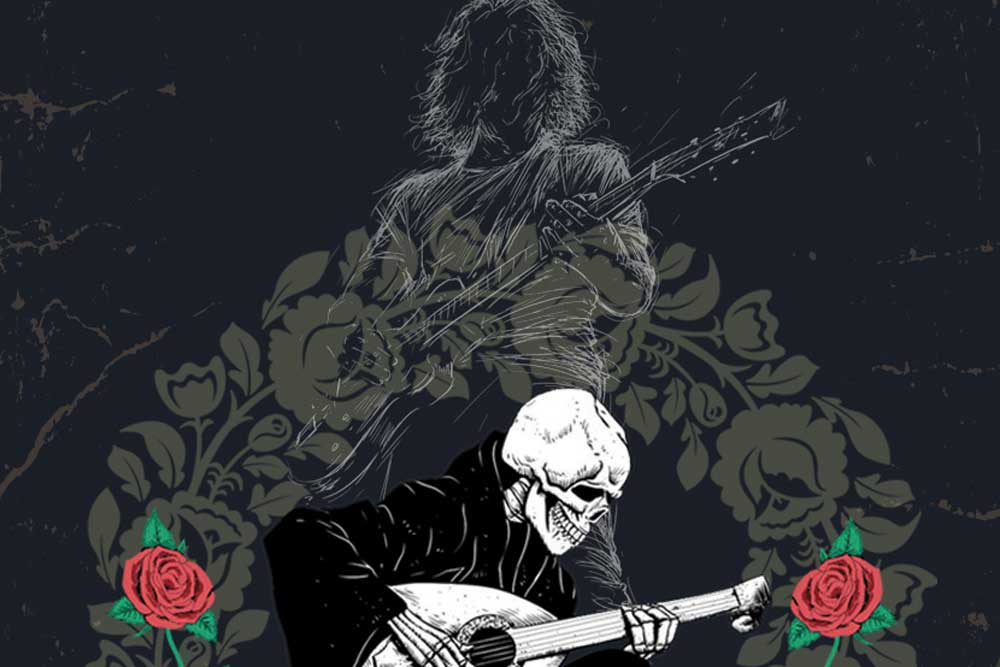 WHEN JOHN BONHAM died in 1980, he had some 40 vodka shots in his system. Bonham was the drummer of Led Zeppelin, arguably rock ‘n’ roll trailblazers and inarguably complete tools. There’s this thing that happened— allegedly—in 1969 involving the band, its crew, another band, and a young woman in a hotel room. The story has shifted form and shape over the years; without getting into the graphic details, it’s referred to as the ‘shark episode’ or the ‘mudshark incident’. Needless to say, it’s horrifying. David Bowie, when he died in 2016, was eulogised as this genius and a great role model for the youth, neatly glossing over all the depravity and misconduct he’d been associated with, including but not limited to the statutory rape of a 15-year-old girl. There are similarly disturbing stories from the ‘good ol’ days’ about Chuck Berry, often touted as the father of rock ‘n’ roll. The Rolling Stones are all somehow still alive and playing music, defying science and reason. At a reasonable estimate, their blood is more drugs than plasma by now.

Music, until not too long ago, seemed to function in its own little bubble of excesses. The recklessness has even been romanticised: ‘sex, drugs, and rock ‘n’ roll’. It used to be a free pass for successful artists to do terrible things, both to themselves and other people. No rules. They were ‘rockstars’, you see.

From the 60s through to the 90s, it was all about partying with complete annihilation—the groupie culture, the ritualistic trashing of hotel rooms, the violence, the absurd abuse of all kinds of drugs, the generally obnoxious behaviour (Axl Rose being a poster child for that last bit). Sid Vicious, the figurehead of early punk as part of the Sex Pistols, was actually a terrible bass player, to the point where the band’s guitar player, Steve Jones, apparently turned off Vicious’ amplifier on stage at times because he sucked so much. And yet, for all the ‘glorious’ excesses he exemplified, he remained. Just a reminder: Vicious blinded a young girl in one eye when he tried to throw a glass at another band and missed.

Of course, writing and performing music for thousands of people every night demands—like all art—a special kind of vulnerability and openness that you present to complete strangers. It can be overwhelming. And success at a young age—Kurt Cobain was all of 24 years old when Nevermind broke through in 91; The Beatles were barely out of their teens when Beatlemania took over—comes with its own peculiar set of pressures. It’s obviously hard to cope. The stress doesn’t excuse bad behaviour, but it often does inform it. And self-destructive behaviour, while tragic in its own right, need not be judged on the virtues of morality.

It’s a different world today. The last few years have seen the great debate in rock ‘n’ roll revolve around one question: Is rock dead? Rock has lost social currency, with hip hop taking its place. There’s been little innovation in rock music—that particular honour goes to electronic music (and to the underground). But while the debate rages on—with the answer probably being that the form is more inclusive now and no longer the domain of the tortured White male asshole—another question emerges: is the rockstar (finally, belatedly, mercifully) dead now?

In terms of fandom and visibility, arguably the biggest so-called rockstar of modern times is Dave Grohl of the Foo Fighters. And he’s crafted an image of himself as the ‘nicest guy in rock ‘n’ roll’. He’s likeable and quote-worthy. When he breaks his foot mid-concert, he promises the crowd that he’s going to return after a quick visit to the hospital. And he does. He, by all accounts, isn’t a junkie. He brings internet punchline Rick Astley on stage to ‘rickroll’ the audience. He engages with fans like a normal person. He’s relatable and does goofy things. He seems like he actually enjoys what he does, going against the first principle of playing music. He’s not abrasive. He’s not edgy. He’s not a ‘bad boy’. (He’s also musically irrelevant but that’s a different story for a different day.)

Another prominent band is Coldplay, fronted by the insufferable Chris Martin, the most vanilla character in all of rock’s history. Following all the criticism and ridicule his band faced, Martin had to resort to self-mockery to endear himself to sceptics. Radiohead haven’t really been a ‘rock’ band for decades now, but they’ve refused to play the game, instead steadily building up their own business empire. As for Muse, another big stadium-rock band, those guys are too busy with insane conspiracy theories to do much else. Pearl Jam has pretty much slipped off the map completely.

There’s not much space left for a very specific type of Rock ‘n’ Roll: The Rock God, the extravagant male narcissist whose selfish behaviour is deified and celebrated

This isn’t to say that rock music is all sanitised now. The hypothesis here isn’t that rock ‘n’ roll is clean and family- friendly; just that there’s not much space left for a very specific type: the rock god, the extravagant male narcissist whose selfish behaviour is deified and celebrated.

Just last month, an anonymous Twitter account accused the frontman of Tool and A Perfect Circle, Maynard James Keenan, of rape when she was 17, back in 2000. He allegedly picked her out from the crowd and got one of his crew members to invite her backstage, after which he took her to the tour bus. Following this, more stories of Keenan’s modus operandi emerged: women would be handed special backstage passes so he could get intimate them with after a gig. His response (on Twitter) to the allegations was very much in character: he dismissed the claim as false, accused the accuser of damaging the ‘Me Too’ movement, and called his own response ‘unrequired’. He smugly added: ‘As for my delayed but un-required response, I had my phone off. You should try it.’

That’s one aspect of it. Keenan’s behaviour, while heavily disputed by the obsessive fan armies of the two bands he fronts, hasn’t affected him as such (yet), but it also hasn’t been outrightly dismissed as something that just happens. The Me Too movement hasn’t quite reached the world of music, but more meaningful conversations are being had now that it’s in the public consciousness. Bad behaviour isn’t rewarded; it’s no longer encouraged. Of course, it still happens, but artists are now more accountable for their actions than they were before (a low bar, admittedly, but it’s a start). The ones still indulging in those dated tropes are usually out of touch, unable to keep pace with progressive values infiltrating their space. Late last year, Josh Homme of the Queens of the Stone Ages kicked a female photographer in the head during a concert. Following the backlash that naturally followed, he offered an arrogant apology of the ‘I’m- a-genius-and-I-was-lost-in-the-moment’ variety. This wasn’t received well, so the guy had to apologise again, this time on video with him sobbing.

The shift, if I have to pinpoint a time, began at the turn of the century, when peer-to-peer downloading became a thing and destroyed the music industry. There had been attempts well before that, of course: a lot of punk in the 70s and 80s was a direct response to the rockstar clichés of the era. The Riot Grrrl movement of the early 90s, so strongly associated with third-wave feminism and with the brilliant Kathleen Hanna at its forefront, was an attempt to wrest back the power. Even the grunge scene of the same era was steeped in anti-masculine values, running in parallel to the ‘anything goes’ excesses of the time.

BUT IT ALL came to a head after the grunge bands self-destructed, and the bands that did exist after made a dedicated shift away from that life of tired stereotypes. Meeting People Is Easy (1998), a documentary film tracking the misery that enveloped Radiohead (Thom Yorke in particular) after the success of OK Computer, was a nice little precursor to the shockingly experimental Kid A, where what was perhaps the biggest rock band in the world decided to ditch guitars altogether for a broody electronic sound.

The rise of Napster and peer-to-peer downloads meant that bands no longer had access to the kind of cash that allowed them lifestyles of excess. They had to rein it back in. They couldn’t rely on sales or royalties alone; touring and merchandise became their primary source of income. It’s only now that the industry is just about back on its feet, and back to exploiting artists and fans alike to make big money.

And slowly the world grew up just a little too; people (some, not all) realised that the parodic nature of the rockstar no longer needed to be idealised. Accepted, maybe, grudgingly; but without the aura of glamour that surrounded it previously. There was more space for diverse voices and points of view.

The fact that the early 2000s had not all that much to offer in terms of innovation within rock music—at least not in the mainstream, with hybrid acts and nostalgia-minters mostly taking precedence—further piled on the misery. (You can’t be a prick if you’re not talented.) There was also the slow disintegration of previously established beats of music journalism—accompanied by the rise of online publishing—which meant that the press could no longer craft these ‘flawed superhero’ narratives with as much ease as it did earlier.

Musicians still do horrible things. Maybe it’s more low-key now; there’s less of a show around it. While it’s nothing to be celebrated, it’s also not going away anytime soon. And a lot of it is still tolerated purely because of their gifts. It’s brushed aside. But the idea of the grand old ‘rockstar’ has begun to fade. And good riddance too.