×
ART: Inside the Studio 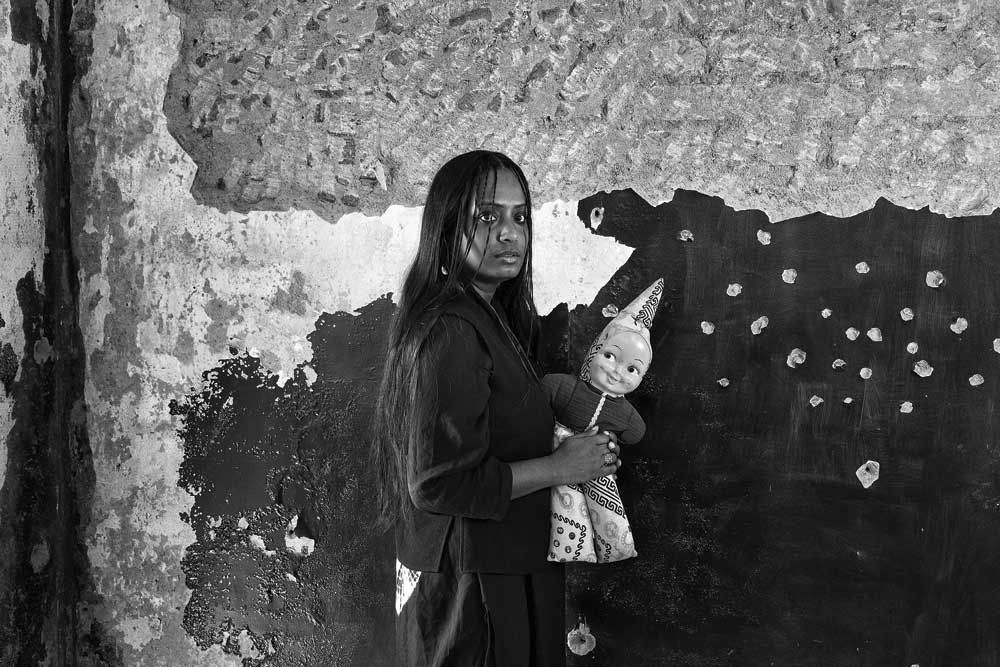 “T-E-T-H-E-R,” I SPELL out as Mithu Sen eagerly composes the word on a sheet of paper. She is stretched elegantly on the diwan, her back against the wall, in her artist husband Samit Das’ study, located in her studio in Faridabad. I was responding to her request for the nuance behind this word I happened to use in a sentence a minute ago—“I’m pretty sure I don’t want anything that tethers me, that’s like an attachment,” I had said. I wondered whether this wordily secret I was sharing would someday manifest in her practice, possibly in its inverted form. Sen, who has an affinity for the connotative possibilities of the prefix ‘un’, would perhaps co-opt the word as ‘untethered.’ I am somewhat intrigued that it hadn’t already been consolidated into her linguistic vocabulary, considering how it so aptly and succinctly defines both her being and her practice.

“I’m trying to undo myself,” Sen had said sometime at the start of our conversation. This was my first unofficial trip to her studio. It had been in the works for a while, but scheduling it had been a challenge, since our travel dates tended to clash. So, two weeks after I had returned from my month-long residency in Goa, where I’d made my one- night only debut as a performance artist, I asked her if I could come by. It seemed like an opportune moment for us to exchange notes, given that until then I had never fully inhabited the mind space of an artist. “You’re looking so fresh and beautiful,” she said to me. “You have this glow coming out and it shows in your body. Some kind of sublime.” I explained it had everything to do with my performance piece, The Miracle of the Loaves and the Fish, a three-course textual meal. She urged me to talk her through it, and relished every detail. When I told her I was trying to complicate the categories of writer and artist, she offered her own semantic dilemma as a counterpoint.

Critics, curators and gallerists often asked her about her supposed ‘transition’ from visual to performance art; a trajectory that Sen does not necessarily subscribe to, or one that her practice always repudiates. “I conceptualise my being as a constantly performing entity,” she said. “Whether I write a letter or draw on a surface, I am processing myself.” In choosing to relentlessly ‘undo’ herself, Sen has been privileging the idea of her practice as a continuum rather than as a series of medium-driven explorations. At its blatant core is her physical and emotional self. “Everything comes to me through the sensation of body—touch, smell, sound—and not as theory,” she says when I ask her about the relationship between intuition and art making.

If anything, the bottom line of Sen’s practice is her continual engagement with subverting hierarchies and hegemonies, whether sexual, political, regional, emotional, or lingual, which are embedded in society and surface as taboos. Sen believes that all her art work— poetry, drawing, sculpture, objects, graffiti, installation, photography, film, home décor, friendship, teasing, provocation, phone calls, Facebooking and Instagramming—stems from a conceptual and interactive drawing background. ‘This variety of media defines my constant need to be expressive in whatever way possible and keeps me free from the self-imposed restrictions of a singular practice,’ she writes in the introduction to her website-in-progress that will be an imaginative storehouse of information on her art. Sen reveals to me the code she has evolved to help her classify her body of work: Radical Hospitality; (unmonolith) Identity; Lingual Anarchy; Untaboo Sexuality; and Counter Capitalism. Her various projects and pieces often are not fixed but broadly occupy these notional territories. Sen’s very purpose in life is to live as though she herself were an ever- evolving work of art.

I conceptualise my being as a constantly performing entity. Whether I write a letter or draw on a surface, I am processing myself

Her last birthday, on October 26, 2016, served as an excellent reminder of this predisposition. Having spent over 100 hours editing a video that would form the backdrop to her performance piece, Aphasia, which she would later present at The Guggenheim as part of ‘Field Meeting: Thinking Practice’, a collateral event of the Asia Contemporary Art Week, Sen decided against her initial impulse to spend the day by herself and instead posted an open invitation on her Facebook page saying she was turning 117 again. ‘Please come home,’ she said, with a postscript about her inability to decide on return gifts. I went around 9 pm and found Sen sitting in the corner of her living room surrounded by paper and her signature shade of crimson paint. She was preparing drawings on paper that she gifted each guest who turned up, along with a little succulent, or what she called a “dry plant from my garden with a promise of watering and love.” The next day she posted a thank you note. ‘Not bound by rules of grammar, formalities, hesitation, diction, direction, vocabulary and syntax, a shortest birthday notice with abbreviated words on social media last morning… seemed a joke indeed,’ she wrote. She said she felt like how the rain feels when it is measured in inches. Her note, while conveying so much of her inherently generous spirit, also betrayed her inclination towards short-changing herself, for there was very little motivation for those of us who’ve known her and consider her to be a friend to not have shown up at her doorstep. Her radical hospitality has always been the lure. Sen was particularly effusive that evening. She wore a mossy green sari with the edge of her pallu tucked near her waist and had crowned her bunned hair with flowers, Kahlo-like. As usual, Sen and I posed for a selfie, which I later titled ‘sisters-in-love’, a reference to an in-joke we share on account of our shared complexion, an attribute that has often been the source of confusion where travelling curators have mistaken me for her. During our last meeting, though, Sen recounted how, for a change, it was she who had recently been mistaken for me. We burst out laughing, unable to contain our disbelief. “We really are like soul sisters,” she said, implying that, apart from our somewhat similar apparitions, both our praxis derive from our preoccupation with the body.

SOMETIMES, WHEN Sen is asked about her alleged transformation from a visual artist to a performance artist, she claims she was always a performance artist. “I have a very definite idea of my identity, as a whole, I see how each moment is performing,” she says, qualifying performance as the consequence of the brain being activated by the self to act out the next moment. “Our mind is working before we act.” This gesture is different from acting, because it doesn’t imply either rehearsal or the playing out of a script. “The brain is transmitted into a physical act. The manipulation of your own self and consciousness is an intellect. It is an intellectual way of translating an act from your brain, like absorbing the immediate surrounding and connecting that thing with an outer world—that’s where the whole act happens.” When she is in the throes of a performance, whether as a movement in itself, or in the form of drawing or painting, Sen is both tethered and untethered. Her being remains fixed, but she allows for a certain unmooring from its usual state in order for it to be otherly. Her adoption of the motif of nonsense has offered a certain methodology by which she is able to articulate that which exists beyond the realm of logic but within the region of instinctual comprehension.

As a poet who has published four volumes of poetry in Bengali, Sen has a very astute conception of the reach and the limit of words. In choosing sound over meaning, she subverts the hegemonic compulsion towards hyper-signification, instead opting for all that can be communicated through feeling. Sen’s introduction to the condition of aphasia was facilitated through her father, who, after a stroke, found himself not quite able to speak conventionally, so that sound became a substitute for meaning, and inflection became a semantic structure. Sen has even tried to endow visual nonsense with a quasi-Bengali script. I am a Poet, for example, a piece she created for the 2013 exhibition ‘Word. Sound. Power’ tried to subvert the political gesture of meaning-making and linguistic hegemony by asking readers to evolve their own non- sensical interpretation of her computer-generated visual gibberish. If you recorded your imagined version of the non-text, you would get a copy of Sen’s book of poems, all of which embodied the same non-scripted language. ‘No one but you speaks this language. It is yours to read, to decipher, to interpret, and to understand,’ she had written, stating clearly her preference for personal vocabularies as against those that are more universal, and also contradicting the idea of being attached to a tongue.

Sen’s studio is similarly untethered and rife with a solitary energy. She prefers to work alone, even seating her sole archive assistant, Lipika, in a separate room so that she is unfettered by any other presence. The innumerable books that line her shelves have been meticulously catalogued. Sen has ingested their contents so that they have been internalised by her consciousness. There is no urgent need for reference. On one wall are incomplete drawings that secretly revel in sexually explicit imagery, an extension of her ‘Untaboo Sexuality’ thematic, variations of which are currently on view at the Kiran Nadar Museum of Art , Delhi, in the form of three Bhupen Khakar-esque works: Handle with care but do handle, mixed media drawings on custom made handmade acid-free paper; The same river twice, an evocative set of shadow drawings of on engraved acrylic glasses and mixed media water colour on paper installed along a disc-like kiosk with a fluctuating light sequence that controls what is illuminated and what is thus rendered visible; and We unfinish each other, the last work, a series of 17 bronze sculptures suspended from the ceiling.

All over her studio are an assortment of uncanny objects acquired by her from her travels, the kind that formed the contents of her Museum of Unbelonging, a disc-shaped glass vitrine full of lost and found objects that she first showed at the Lalit Kala Akademi in New Delhi in 2011, and thereafter at Queens Museum, New York (2015), and Art Unlimited, Art Basel (2016). Much like the vitrines in her home in Alaknanda, these objects are among the things Sen considers most precious to her. She is tethered to them as emotionally as she remains untethered to the exigencies of the art market. “I will only work with the physical ability I have,” Sen says. “If I am good, I can work up to 18 hours a day, but if I’m sick, I will sleep. So, in my lifetime, if I live up to 60, 70 years, my production will not be super human. I want to leave behind my life, and I want it to show for how much time I loved somebody. This is how I live—by being me.”