Master of the Moment

Satish Gujral’s work casts a spell on viewers with its transformative power. While he infuses humanity and warmth into the images of his subjects, his self-portraits are more brutal, depicting a range of emotions by deft modulation of tones and textures 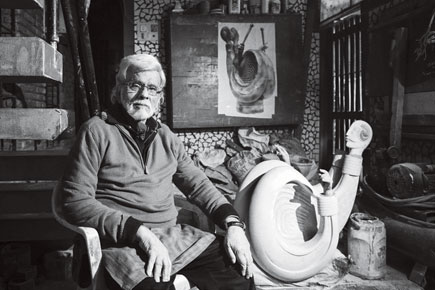 Far from the madding crowd of the India Art Fair and other assorted cultural happenings around the city, my favourite artistic refuge in the past few weeks has been Satish Gujral’s magisterial retrospective at the Indira Gandhi National Centre for the Arts (IGNCA) in central Delhi.

Beautifully curated by Pramod Kumar KG, Satish Gujral: A Brush with Life has been organised by the Gujral Foundation to celebrate the artist’s 90th year. A handsome volume accompanies the show, but it is the transformative power of the series of interlinked rooms of the Twin Gallery at the IGNCA that casts a spell on the viewer. The eye is alternately soothed and quickened as it adapts to the range and unpredictability of Gujral’s styles over the decades. There is just about enough textual clues on the walls to help the viewer navigate through the art-historical milieu of the painter’s years, without ever distracting from the visual appeal of the display.

As one enters the dimly-lit room which leads into the show, one is greeted by a series of contorted faces and bodies, painfully twisted torsos, mouths exploding into a silent scream, humanity in a tangled, miserable mess rendered with poetic strokes of the brush. And even in that brief instant, the sheer intensity of the artist’s imagination, his ability to inspire visceral reactions through his chosen palate of grim colours, hits the viewer hard.

When he was eight, Gujral, who was born in 1925, lost his sense of hearing in an accident. He regained it for a while in his seventies, due to a cochlear implant, only to have to give it up after a few years when he couldn’t distinguish between sounds. At the time of the partition of the Subcontinent, Gujral was a young man in his 20s, enrolled at Sir JJ School of Arts in Bombay after having trained at the Mayo School of Art in Lahore. For him, art education was more a means to an end—the idea was to learn a skill that may help him make a decent living—than just a stroke of inspiration.

So, almost by accident, Gujral became one of the most memorable chroniclers of his generation. In spite of the cave of silence he inhabited, he heard the laments and anguish of the millions who were displaced on both sides of the border. He witnessed their miseries and preserved them in his paintings as few others did. No study of the literature of Partition can be complete without taking into account Gujral’s outstanding visual archive of the event, capturing its drama and desolation in all its vividly humane details.

In the paintings of his youth, one can see intimations of Edvard Munch, Francis Bacon, perhaps even of Amrita Sher -Gil, though Gujral may not have been aware of, let alone influenced by, any of their work so early on. Yet, his unselfconscious affinity with their styles, his propensity to look at life through a glass darkly, already put him in a league with some of the best modernist painters of the 1940s and 50s.

In 1952, much to his astonishment, Gujral won a scholarship to study in Mexico, where he was influenced by three great muralists, José Orozco, Diego Rivera and David Siqueiros. The profound effect of all three artists can be discerned in the portraits Gujral made around this time. But more prominently, it was in his gift for creating outstanding murals—on significant buildings in Delhi, Chandigarh and Kolkata—that the evidence of his training in Mexico becomes apparent.

Gujral’s portraits turned out to be much kinder than the horrific countenances he had captured in his Partition paintings. He painted several politicians—one of his first commissions was to create a likeness of Lala Lajpat Rai for the Central Hall of the Indian Parliament—some close friends and a few self-portraits. While he infused humanity and warmth into the images of his subjects, his self-portraits were more brutal, depicting a range of emotions by deft modulation of tones and textures. It was to be a relatively short-lived phase in his prodigious creativity before Gujral found something else to occupy his attention with.

Perhaps his early training in a relatively strange medium— mural—gave Gujral a talent for adaptability, a special fondness for the three-dimensionality of forms. Through the decades, he continually experimented with a range of media and idioms, making sure he never got fixated on a signature style. Like John Milton, who wrote one work in each significant genres—comedy (Comus), tragedy (Samson Agonistes), lyric poems and epic (Paradise Lost)—Gujral also had the capacity for modulating his pitch and producing work that was varied, fresh, and suited to different occasions and moods. Walking through the show, one is struck by how little there is of any overlap between the idioms he adopted in the seven decades of his long career.

In the 1960s, he moved towards abstractionism, dabbled in cross-hatching and in aniconic pencil drawings. He was one of the first Indian artists to embrace paper collage as a major mode of expression. As the excellent curatorial note on the wall points out, very little of this body of work, which included some paintings with religious themes, exists in the public domain, except for what has been documented by Gujral’s close friend and photographer, Madan Mahatta. The work from these years is also of a piece with the spirit of the decade when artists like Bridget Riley were causing a revolution in Optical Art.

But the abstract period proved to be transient as well, perhaps understandably so for an artist whose education since the age of fourteen had been geared to turn him into a master craftsman. Be it carving a piece of stone or a block of wood into a form, hammering a piece of metal into shape, or modelling a lump of clay into an object, the training Gujral received at Mayo School of Art was, above all else, pragmatic and utilitarian, meant to give him control over medium. It was with his individual genius that he would breathe life into these technical skills.

Over the years, tactility would become a cornerstone of his work, morphing into sculptures made of burnt wood and resin, or carved out of rock, or assuming the form of sinister-looking mechanical contraptions, forged out of metal pipes and steel parts, and reminiscent of creatures out of dystopian science-fiction fantasy. In some instances, especially the statues named after Indian deities like Ganesha and Lakshmi, the resemblance to the forms worshipped by society are as good as totemic. Looking like idols and talismans one finds in folk traditions, these forms are at once utterly stirring, meant to titillate the senses with their minimal, geometric beauty, but also subtly cerebral, acting like riddles that are meant to give you a pause.

The grand finale of the synthesis of these diverse styles happens, of course, in Gujral’s most ambitious avatar: that of an architect. Once again, his years at the Mayo School, with the multifaceted training in the visual and the plastic arts he received, must have given him the foundation needed to see the world like an architect, to think of space as his medium and hone the ability to play with it like one.

Some of Gujral’s most striking creations as architect were the Belgian embassy in New Delhi, apart from a country house for BK Modi, the industrialist, which was his first commission. One of the most sublime moments in the show, in fact, is to find oneself surrounded by the photographs taken by Madan Mahatta of the architectural sites and murals designed by Gujral across India.

‘Painting, sculpture and architecture are the equal manifestation of a single aesthetic,’ Gujral has said. ‘Determined by the force of necessity, all three are locked together in a common structural framework, of measure and proportion, system of movement, and echo…’ In all the mediums that he chose to work with, all the materials he used to express himself with, Gujral experimented with this belief in the fluidity of structures, across different dimensions and scales, making the poetics of space central to his artistic enterprise.