Malavika Sarukkai: A Life in Motion

On the eve of the famous Margazhi festival in Chennai, Bharatanatyam legend Malavika Sarukkai relives the liberating journey of three decades in which her body and soul became one 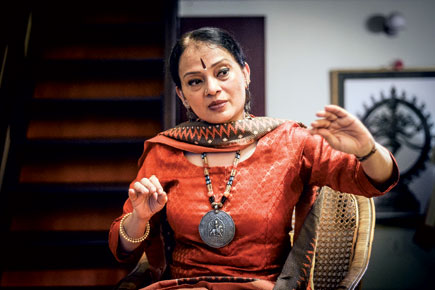 On Malavika Sarukkai’s porch in her house near the sea off Chennai’s East Coast Road, there is a champa tree. That tree, Malavika says, sitting on her diwan and gazing at it through a large rectangular window, has provided her with comfort, security and companionship. “Let’s just say it has been witness to many things, both happy and sad.” There is another tree in her courtyard—a bougainvillea— that has been a part of her life for longer than the champa. Every December, when the sun changes direction, the tree becomes a canopy of red, allowing natural light to freely and imaginatively flirt with it.

A constant preoccupation, a recurring motif, the tree has remained fodder for inspiration and found articulation in the internationally acclaimed Bharatanatyam exponent Malavika Sarukkai’s three-decade long career in choreography. Many years ago, before a dance trip to Brazil, she allowed the rainforests to consume her imagination, and produced a Bharatanatyam work that paid sensitive homage to the tree. Tamil poetry penned by SV Seshadri celebrated the tree and everything to do with it—the shade it provides, the birds that make it their home, the branches that bloom and the sunlight that dapples through in all its fascinating glory. A few years after, she was the one behind yet another dance production on how a seed becomes a tree with flowers. A little later, Malavika Sarukkai came up with a work inspired solely by the Chipko Movement.

Actually, the tree is a significant metaphor for Malavika’s own relationship with dance—rooted and built on a firm, unfettered core, committed and uncompromising in its inherent need to grow, provide and contribute, a stoic symbol of calm and quiet that exudes an almost existential sense of grace. “My body,” she says, using her hands to graze down her body and reinforce what has always been her unflinching philosophy in dance, “is the site of heritage. It is the medium. It is really all I have… And my continuing, endless quest, my search, rigour, refrain, tapasya, sadhana, has been to see how I can prepare this body to find moments of precise and pristine alignment— where the mind and body are intertwined in a happy, harmonious state—and their resultant beauty. The good thing is, I have never ever lost that sense of curiosity.”

It’s true. Neither age nor the passage of time (with life’s many experiences) has diminished her spirit of discovery, wonderment and adventure. This morning, a few hours before we meet for this conversation, Malavika has spent three hours in her dance room with a full orchestra, dancing non-stop, almost like a new student, eager and enthusiastic to perfect her technique, hoping for moments of inner balance, of magic. “And what a morning it was! You know, my body was humming today,” she says with a smile that reaches her eyes. Hers are speaking eyes: they sparkle with a sense of warmth coupled with mystery and sensuality.

“Some days that happens very naturally. In fact, today, my violinist asked me, ‘Akka (sister), why are you dancing so much?’ and I said to her, ‘I do it because I love it.’ I love to feel. It’s like my body has been lit and is being carried away to a different realm of existence. For me, dance is like a prayer. Like magic.”

Her sanctuary of dance is also a sanctuary of contrasts, meditative and dynamic; of silence and energy; of discipline and liberation; of framework and imagination; of rigour and release. Malavika recalls a story from the past where once after a performance on one of her favourite pieces on Krishna, a member of the audience came backstage and said to her, “I saw Krishna.” And she said, “For you to see him, I have to see and feel him.”

Over the years, Malavika admits that “learning to live the moment, to be centred and yet allow her spirit to take flight and let go” has become “much easier”. “I think I’m more at peace with my dancing now than I was before.”

At 16, several decades earlier—she is 56 now—Malavika dropped out of Women’s Christian College in Chennai, opting bravely to “let everything else fall out of her life” and allow dance to become her singular passion and preoccupation. The only person who stood by her and that decision “like a rock” was her mother, her “life partner, a free spirit” who encouraged her commitment and pursuit of excellence. The next ten years, Malavika spent learning, absorbing and questioning Bharatanatyam and the relevance of its repertoire in her own life. “Some parts, as I went along, I realised, didn’t resonate with me at all,” she says, referring to her disconnect with the world of Padams and Javalis (a genre in dance) and her discovery of a whole new universe of bhakti poetry and the urge to challenge her own self to seek within, excavate, and create another movement vocabulary that would resonate with her and also be relevant to the world around.

As a dancer, Malavika has always stood her ground, constantly looking within, never allowing life and its pace to dictate her choices. Earlier this year, soon after her performance at the Music Academy, Chennai, Malavika went away for two weeks and buried herself in her own thoughts, allowing ideas to form and take shape before she announced the subject of Kartik Fine Arts’ annual Natya Darshan Conference (an annual dance symposium and a meeting point for artistes, scholars and writers connected with the arts) where she will, for the second year in a row, wear the curator’s hat. Last year, the dance symposium, titled ‘Lotuses Blossom: The Creative Process’, was an amalgam of ideas and expressions that explored the creative processes of an array of artistes. This year, ‘Designing Space’, as the conference is titled, is an attempt to “get under the skin” and investigate what determines the creative imagination and explore the deliberate choices that artistes make that go into the shaping and forming of a creative work that finally finds expression on stage. “The idea is to allow ourselves to look into, rather than look at,” Malavika says. She hopes the conference will open a window of possibilities for the expression of interpretations and communication of meaningful ideas and insights.

Consumed by the conference, Malavika has only two performances this Margazhi Season, an annual festival of classical music and dance that unfolds across Chennai and brings together artistes and connoisseurs of the arts from the world over. A decision has been taken to cut back and revisit the existing repertoire instead of creating exclusive work for this Season. “But that doesn’t mean that I won’t invest time, effort and preparation in recreating that work on stage,” she clarifies. “To recreate, you have to live the moment. When dance lives in the moment, it is contemporary.”

IN January, when Chennai’s Music Academy presents its dance festival, rasikas will assuredly flock to see Malavika carry them along on a journey. Unlike many other artistes, her performances in this city are few and far between. “But it matters,” she says, reinforcing the reputation of a place widely recognised as the capital of the country’s classical arts, “to present work in a city that has nurtured and nourished the arts. Having made this my home for about 35 years now, performing here is like a homecoming.”

A solitary reaper who has enriched audiences with her choreography and performances across India and the world, Malavika received the Padma Shri in 2003 and the Sangeet Natak Akademi award a year before that. Having learnt both the Thanjavur and Vazhuvoor styles of Bharatanatyam from Kalyanasundarm Pillai and Rajarathnam Pillai, respectively, Malavika honed her abhinaya (art of expression) under the guidance of the Chennai-based abhinaya exponent Kalanidhi Narayanan. With that grounding, Malavika went on to make the dance form her own.

Essentially a performing artiste, Malavika never invested her energy in teaching and training students, en masse. Over the last ten years or so, only a handful of talented dancers were hand-picked for her mentorship. “I stepped out of that scene of training groups of students and readying them for their arangetram (a dancer’s debut full-length performance, considered a rite of passage),” she says, “I was disillusioned with the idea of the very purpose of dance and a dancer.” Needless to say, teaching dance is highly demanding. “If I want to inspire, it takes a lot out of me,” she says, “I take my dancers through the scenic route—so it involves time, pause, exertion and reflection, as against the short route through the arterial city roads.”

Next year also marks a new beginning for her. From being a solo dancer, Malavika is now gearing up for the debut of her first-ever group work, Vamatara: To the Light 2, a continuum of her full length solo work that premiered last year at the National Centre for Performing Arts in Mumbai, on 16 January next year. In preparation, Malavika and her four dancers spent four hours at a stretch for two weeks at a large space within Dakshinachitra, a heritage centre in the outskirts of Chennai, to rehearse their performance and evolve their movements. As a result, she believes, it has acquired an all-new meaning.

Two years ago, Mumbai-based documentary filmmaker Sumantra Ghosal, premiered his film, The Unseen Sequence, with Malavika’s art as the focus of its narrative. A powerful documentary, it has travelled the world to much critical acclaim. “Looking back, it seems almost critical that Sumantra made that film. After all, we’ve managed to capture in it—among other things—my mother Saroja Kamakshi, before she passed away, Kalanidhi Narayanan Mami (an exponent of Abhinaya, and one of Malavika’s mentors) before she fell ill, and DS Aiyellu (a legendary designer of dance costumes) before he became very old and terribly sick.”

The making of the film itself, Malavika remembers, coincided with a highly trying phase in her personal life. She drifted in and out of performances and their demanding schedules while tending to her mother who’d taken ill and required care and attention. “I was drifting in and out of conversations on dance with Sumantra and the camera followed me around, and suddenly, I’d completely fall out of his life and let my own life take me over. It was surreal, the entire experience.”

Those who have seen The Unseen Sequence will agree that the film is a lot like that—sharp, evocative, sensitive and indeed surreal—enticing viewers to freely surrender, immerse themselves in the beauty of the art, and drift away to a plane where all that matters is one’s feelings and experience. Almost exactly like her dance.